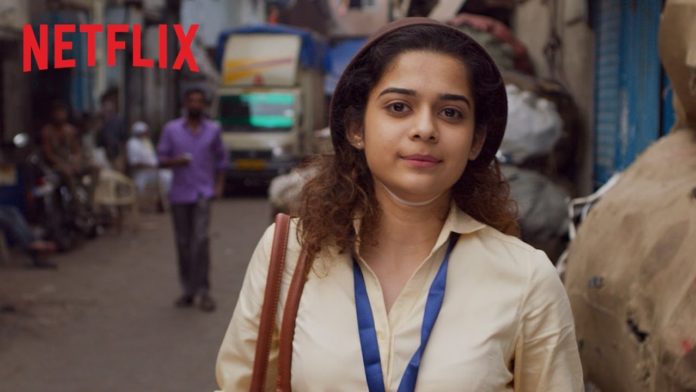 There is a vast difference between smart cinema and smartass cinema. The latter is designed by people who think they are funny, smart, sassy and hip when they are none of these.

“Chopticks”, sadly, belongs to the latter category of wannabe cinema that doesn’t know where it wants to be, or why it is seeking to prove its credentials as cinema in the first place, when in fact it could have easily been a short film, if anything at all.

But then it’s a free world. And nowhere is the world freer than on the Internet where anyone can do anything with no fear of repercussions.

Hence, “Chopsticks”…. you may want to know why this film is titled in such a Chinese way. For the answer, you have to sit through the entire unfunny romcom, or you may please refer to the heroine who is a ‘poverty tourism’ guide and speaks Mandarin fluently. Slow clap for Mithila Palkar for learning a foreign language to be part of a script that is as inspired as Whatsaapp group chats, and that’s a compliment to the film.

Abhay Deol returns to acting after quite a while. He looks bored, unconvinced and hence, unconvincing. I don’t blame him. If I had to play this role, I’d ask for extra money every day just to drag myself to the set. Deol plays a part-time cook and full-time crook named…don’t laugh…‘Artiste’, who helps a young lost girl find her brand new car after it is stolen from a crowded temple by a thief posing as a Good Samaritan.

Incidentally, the actor playing the brief role of the car thief was funnier than the entire film put together. That could be because the scriptwriters’s sense of humour seems as bland as the food that Deol seems to be making in the fully-furnished kitchen of a half-constructed building.

Oh, that’s a joke too: You know… culinary creations in a half-built building. Ha ha.

Now try this from the laughter menu. A goon (Vijay Raaz who specializes playing flipped-out goons) obsessed with a goat, makes one of his debt defaulters sing his favourite song “Zindagi ek safar hai suhana” repeatedly in lieu of payment.

There are blander jokes here, waiting to explode on the unsuspecting viewer.

The one bright spot is the vivacious and spontaneous Mithila. To her role as the waif-life fish-out-of-water Mumbaikar named Nirma (hence, a flurry of detergent jokes), she brings an honesty and verve clearly missing from the film that takes its attempts at levitation too seriously.