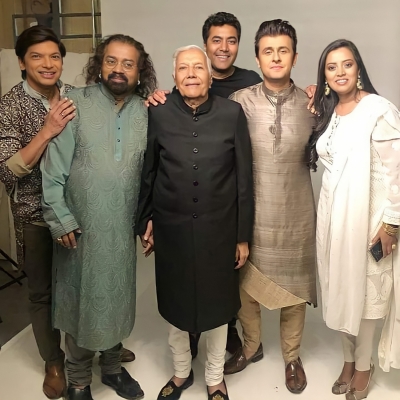 Mumbai– A little over a year after his death, Mumbai will get a square named after the legendary Hindustani classical singer, Ustad Ghulam Mustafa Khan – the ‘guru’ of stalwarts like A.R. Rahman, Hariharan, Shaan, Salim Merchant, and others.

Prominent singers from Bollywood, members of the Ustad’s family, and his disciples shall witness the momentous occasion to honour the torch-bearer of the formidable ‘Sahaswan Rampur Gwalior Gharana’ school of music, said a close associate.

Born in UP’s Badaun, Ustad Ghulam Mustafa Khan was the eldest son in a family of musicians, four brothers and three sisters and learnt basics in Hindustani classical music from his father, Ustad Waris Hussain Khan, at a very tender age.

Later, he was groomed by his uncle Ustad Fida Hussain Khan and cousin Ustad Nissar Hussain Khan, which helped polish the traditional styles of Rampur, Sahaswan and Gwalior gharanas that were distinctive to Ustad Ghulam Mustafa Khan’s singing.

Simultaneously, he evinced keen interest in the history of Indian Classical music and studied the ancient styles – JatiGayan – with Acharya K.C. Brahaspati and conducted research with him.

Ustad Ghulam Mustafa Khan sang compositions derived from Natyashastra and Brihat Deshi, written by Matang Rishi and sharing Dev’s Sangeet Ratnakar based on JatiGayan, which were rendered for the first time in 700 years.

He brought to life this ancient Indian Classical Music from the hoary era with 7 of his records of 30 minutes each preserved at the Sangeet Natak Akademy, New Delhi.

The Oscar winner globally-acclaimed music maestro A. R. Rahman said the new square would be a rightful honour to Ustad Ghulam Mustafa Khan Sahib for his services to Indian Classical Music.

“Great Gurus are the eternal force of knowledge and rich tradition which India possesses. The musical knowledge which Ustad Ghulam Mustafa Khan Sahbi gifted to so many of his students is priceless,” he said.

Renowned singer Hariharan is also thrilled and felt at a loss for words to describe his happy feelings for the iconic figure whose works were sung by students of other Gharanas.

“A square for my Ustad-ji is the best thing to happen. He was one of the greatest masters of Indian Classical Music and Khayal Gayaki/Gharana. The amount of work he has done and the brilliant compositions he has rendered are simply amazing,” said Hariharan.

Shaan is also elated by the tribute to Ustad Ghulam Mustafa Khan and said all people in the music industry are very proud of it.

“He will always remain a loving personification of music, dedication and devotion through his voice and persona. I am thrilled by this square in his name which will inspire many more generations towards pure music,” he said.

Ace composer Merchant said: “Ustad Ghulam Mustafa Khan is always in our hearts and thoughtsa and now a square only glorifies that furthermore.”

“It’s a moment of pride for his family, his students and all music lovers… I hope that his name always remains on top and his memories keep us smiling,” said Merchant.

The Khan family said this is a moment of glory and something “special” for them and expressed gratitude to the Centre and ICCR which recently launched the ‘Ustad Ghulam Mustafa Khan Fellowship for Music’ for foreign musicians and singers.

“We feel truly honoured and are thankful to the Government of Maharashtra, BrihanMumbai Municipal Corporation and Municipal Corporator Asif Zakaria for the square in his name,” said the Ustadji’s wife, Amina G.M. Khan.

He essayed the role of Baiju Bawra in a German documentary “Rainmaker” and performed on Coke Studio when A.R. Rahman wanted to present his Guru with his three generations, consisting of his sons Murtuza, Qadir, Rabbani, Hasan, and grandson Faiz.

After leaving his indelible mark in the field of music, Ustad Ghulam Mustafa Khan fell silent at 89, in January 2021 at his Bandra home, and now a square in the neighbourhood will celebrate the musical legend and his legacy. (IANS)