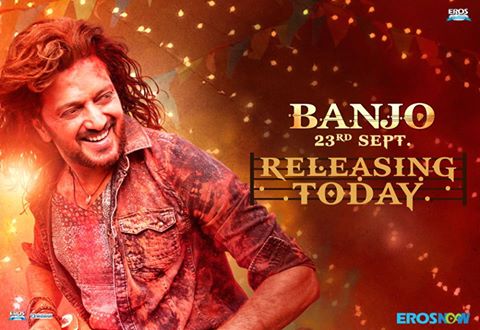 “Banjo” is a film about the underdogs — both the musical instrument which has never perhaps got its due, as well as the four protagonists of the film, who play banjo in the ghettos of Mumbai to earn an extra buck to supplement their meagre income. They may be passionate about their music, but earning a livelihood takes over and they never enjoy their music or take it seriously.

Chris (Nargis Fakhri) a musician from New York comes to Mumbai in search of the popular quartet, after hearing the clip her friend and sound recordist Mikey (Luke Kenny) sends her, as she believes they may help her make the winning composition which she is keen to submit for a music festival in New York.

Nandkishore aka Tarrat (Riteish Deshmukh), a banjo player by night and an extortionist by day, who collects money for the local corporator Patil, whom he looks up to, Paper (Aditya Kumar), who is a paper seller, Vajjya (Raja Menon) who constantly dreams of flying in an aircraft, complete with a sexy air hostess, and Grease, a car mechanic, form the foursome. Music binds these friends who crave for respectability, which obviously eludes them.

The familial pressures to give up music and earn a proper livelihood, rival gang fights of slum dwellers and their dreams, action, romance, drama, to an extent even humour and pathos, director Ravi Jadhav has managed to inject all the possible ingredients in this low-budget film and given it the flavour of an inspirational musical drama with messages too.

Yet, there’s something innately lacking in this film. It lacks depth. Its rustic essence is endearing and appealing in parts, but it skims the surface, as do all its one-dimensional characters. The premise seems half-baked and far-fetched and unfortunately, the weak screenplay does not help.

Riteish Deshmukh is sincere and even attempts to look like the musician he is playing. He fights, he emotes, sings and dances. His raw vulnerability and simplicity in some scenes is endearing, but the script limits him.

Nargis Fakhri seems incongruous, even though she makes a genuine effort to portray her character. The basic premise of her character travelling from New York to Mumbai in search of a local banjo group in the chawls, itself is preposterous. Her accent is in keeping with her character, as is her svelte attire, but it does not gel somewhere.

Aditya Kumar, Dharmesh Yelande and Raja Menon play their parts effectively. Aditya Kumar particularly stands out in the trio. Mohan Kapur as the head honcho of a music company has nothing much to offer. Luke Kenny as Mikey the sound recordist who speaks flawless Hindi and Marathi, is real.

The music by Vishal-Shekhar is undoubtedly a highlight of the film and “Bappa”, “Rada”, “Udan choo” and “Rehmo Karam” are numbers with foot-tapping beats, soulful lyrics and are mellifluously sung. The songs are well-picturised too and cinematographer Manoj Lobo has captured Mumbai beautifully.

In parts, “Banjo” has traces of films like “ABCD” and the obstacles in their path to make it big seem forced too, but it is the simplicity of the theme, which redeems it to an extent.

“Banjo” could have been a story well told, sans the customary cliches of the lives of slum dwellers, but nevertheless, it has its moments of earnestness and Riteish and the music of the film are certainly among them. You may not love it, but you will definitely not hate this film.