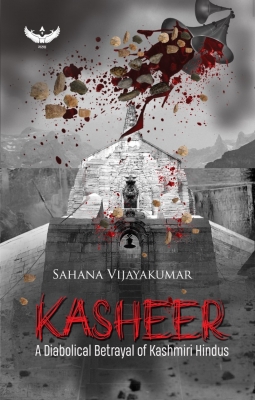 New Delhi– Originally written by Sahana Vijayakumar in Kannada in 2018, “Kasheer: A Diabolical Betrayal of Kashmiri Hindus” in its English translation brings forth to a larger audience the story of Kashmiri Hindus and the unfortunate mass exodus of the community from their motherland in 1990, against the backdrop of Kashmir’s Islamisation.

Translated into English after the abrogation of Section 370 in the erstwhile state of Jammu and Kashmnir, the powerful book comes across as “the plaintive cry of the Kailash Pandit”.

Contending that the reporting on Kashmir has whitewashed the human tragedy of Kashmiri Hindus, “Kasheer” retells the tale in a fictionalised account which is all too real, and catches the facts of deception, betrayal, propaganda and political ambitions that have all but erased the memories of oppression of Kashmiri Hindus from the nation’s conscience. It extricates the truth of human tragedy and presents it with brutal honesty.

Vijayakumar undertook first-hand research during her visit to Kashmir and interviewed hundreds of locals for the book. According to her, the Kashmir issue cannot be understood without grasping the layers of traditionalism, reformism, secularism and fundamentalism within Islam.

“It is a travesty that some stories go untold, lost in the cacophony of dominant narratives and complex realities. The story of the Kashmiri Hindus is one such tale. As necessary it is to wish that the coming days are filled with optimism for Kashmir, it is equally essential to know the unfortunate story of the Kashmiri Hindus who were driven out of their motherland. This is their story. This is the story of Kashmir,” she said about the book.

Covering the genesis of Kashmir and its progress from social, religious and political dimensions, the novel not only visualises both the contemporary and historical pictures of Kashmir, but also scrutinises the underlying philosophies of Sanatana Dharma and Semitic religions, she said.

The bold narration uses multiple metaphors, including that of Aarti Kaul’s unconceived womb, to voice out what happened to Kashmiri Hindus. The book derives its name from Koshur language, in which Kashmir translates to “Kasheer”.

Noting that the author has synthesised the historical perspective and the contemporary reality pertaining to Kashmir very well, renowned Kannada scholar S.L. Bhyrappa, who has written the book’s foreword, said that she connected with the very few Kashmiri Hindus who have “returned home” and were living in ghettos, and witnessed all the places that bear testimony to thousands and thousands of religious conversions under intimidation, rape, murder and bloodshed.

According to Sankrant Sanu, the Founder and CEO of Garuda Prakashan, the book’s story – having come from a South Indian writer – unites the discourse around Kashmir across Indian regions, and reinforces the idea that Kashmir is a national issue.

The Kannada book was translated into English by Hemanth Shanthigrama, a London-based technology professional. It has been translated and published in Marathi and Hindi as well. (IANS)