HYDERABAD–Venkaiah Naidu, Vice President of India, inaugurated the 13th edition of the annual Global Healthcare Summit organized by the American Association of Physicians of Indian Origin (AAPI), with the lighting of the traditional lamp and delivering the keynote address at the Taj Krishna Hotel in Hyderabad on Sunday.

“I am glad to learn that AAPI serves as an umbrella organization with a Network of over 160 chapters across USA,” Mr. Naidu told AAPI delegates. “We are indeed proud of our doctors and healthcare practitioners who are rendering invaluable healthcare services in countries across the globe.” 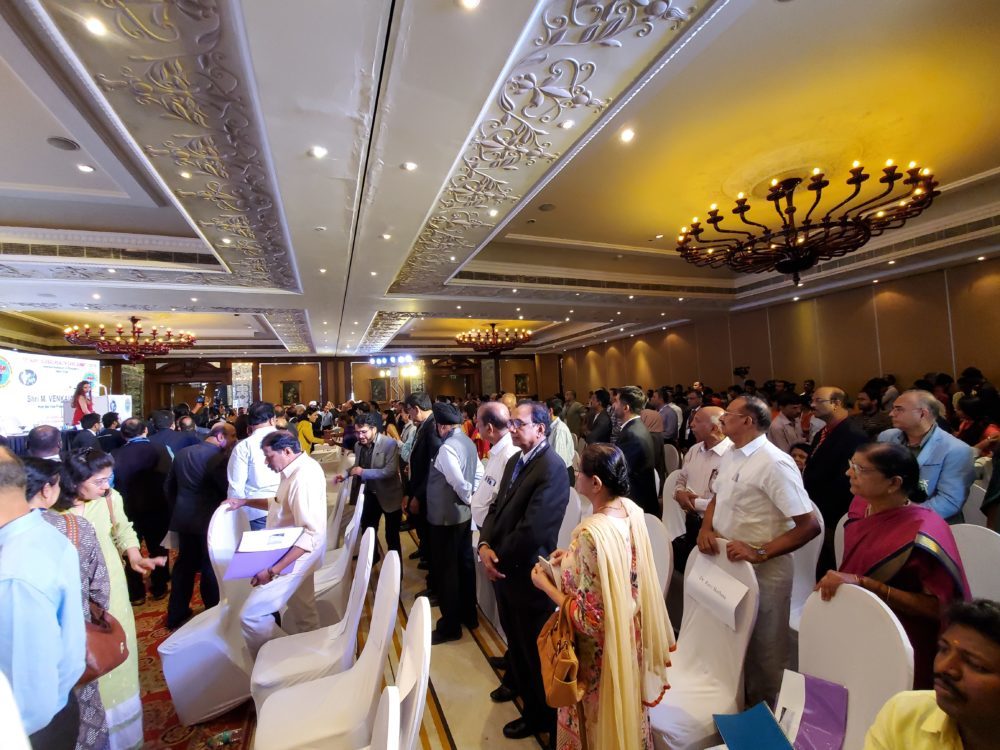 Mr. Naidu devoted a good amount of his speech about the great traditions and the greatness of Indian culture and the civilization of India. Pointing out to India being one of the greatest civilizations, that has given birth to renowned medical practices and higher education before any other nation, Mr. Naidu  said, “If you want to go abroad, go learn earn and then return,” he quipped.

Calling upon the Physicians of Indian Origin to rededicate their lives for the wellbeing of their motherland, India, serving 130 crore people who need their servicers. Mr. Naidu asked of the AAPI delegates not to forget their: Mother, Native Place, Teacher; Mother Tongue and Culture and Traditions of India. 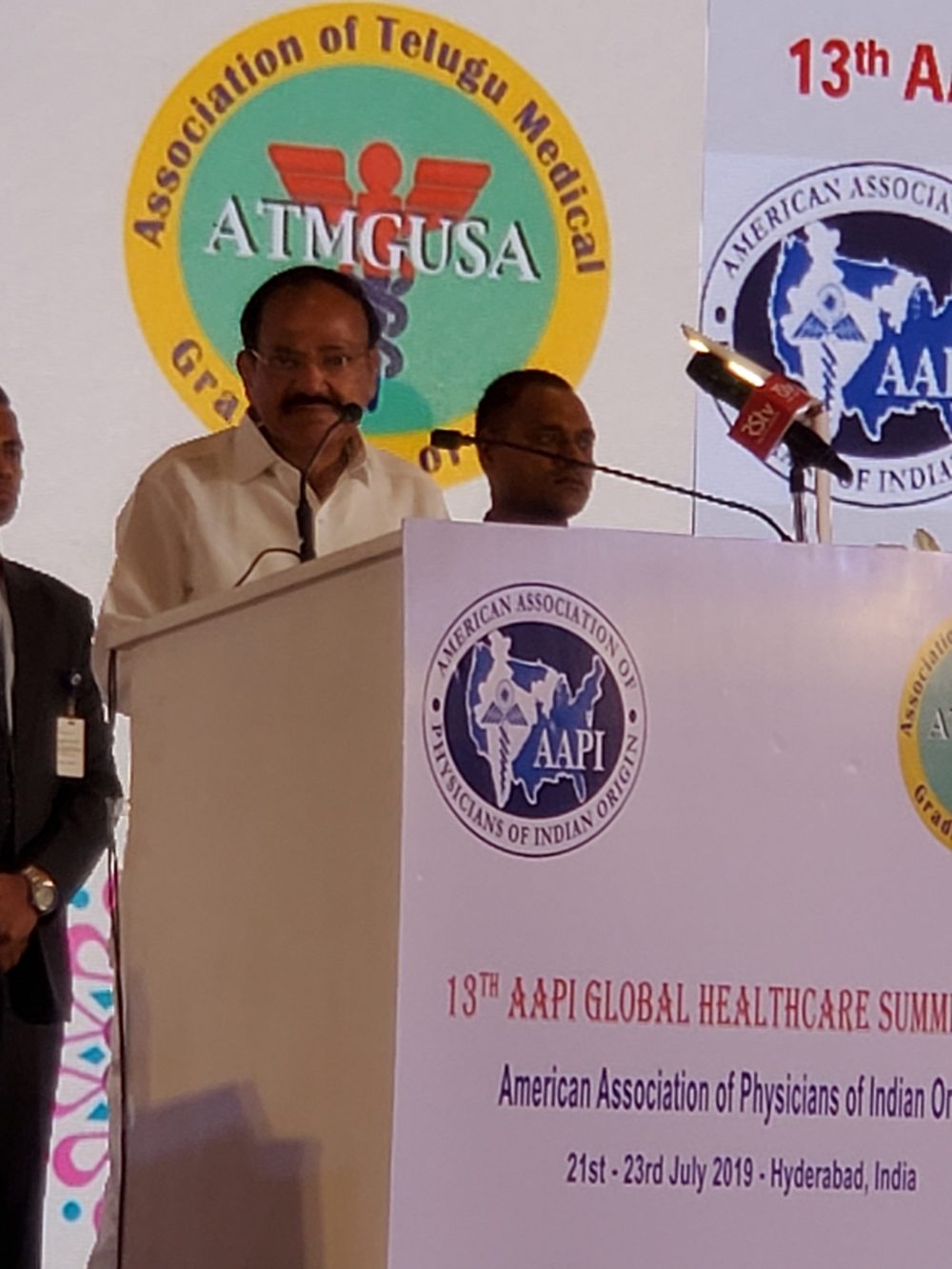 In his welcome address, Dr. Suresh Reddy, President of AAPI, said, “This GHS has promised to be one with the greatest impact and significant contributions towards harnessing the power of international Indian diaspora to bring the most innovative, efficient, cost effective healthcare solutions to India.”

“Apart from conducting CMEs, seminars and workshops, AAPI must consider collaborating with various governments and other private organizations in establishing a state-of-the-art healthcare facility in each district of the country where affordable treatment is dispensed,” the Vice President of India told the delegates.

The Vice President praised AAPI and its noble “mission for India is to play an important role in making quality healthcare accessible and affordable to all people of India. It is indeed a laudable objective as both accessibility and affordability are the need of the hour, especially in a vast developing country like India with a huge population of middle class and lower middle class.”

“Only a healthy nation can be a progressive and wealthy nation,” the Vice President of India, said. “India has launched ‘Ayushman Bharat’, touted to be the world’s largest health insurance scheme, under the aegis of which 10 lakh people have already received free treatment under the scheme,” he added.

Describing that India’s healthcare sector as grappling with inadequate public spending, low doctor-patient ratio, high share of out-of-pocket expenditure, inadequate infrastructure in rural areas, lack of penetration of health insurance and inadequate preventive mechanisms, Mr. Naidu said, “We face a huge shortage in the number of qualified medical practitioners in India, especially specialist doctors. It is crucial that we address this huge gap in the supply of trained healthcare practitioners by opening more medical colleges and increasing the number of seats at both graduate and Post graduate levels.”

The Vice President of India urged all medical practitioners of Indian origin working across globe, to collaborate and work with our government and academic institutions to make Indian medical education world class.

Mr. Naidu called upon AAPI to “help in promoting the use of telemedicine in remote rural areas which lack access to healthcare facilities. Telemedicine can be used effectively in radiology, cardiology, oncology, dermatology and a few other areas. It will help in reducing unnecessary visits to the hospitals for consultations with specialists and avoiding long distance travel,” Naidu said.

Mr. Naidu said that India needs an affordable health care revenue model to meet the challenges of modern day lifestyle. The Vice President called on the medical fraternity to put in efforts to bring down the costs of medical devices to make healthcare affordable. He further said that youngsters are increasingly falling prey to ailments due to a variety of factors, including sedentary lifestyle, improper dietary habits and job-related stresses.

“We must all focus more on the service. The medical service in India is the need of the hour. India is still lagging behind in spite of a lot of advancement in medication. The Center is encouraging private sector in the medical healthcare sector,” he added.

Claiming that India has the potential to become a medical tourist center in the future, the Vice President said accessibility and affordability of healthcare should be ensured as a large section of the country`s population belongs to the middle and lower-middle class.

The Vice president said that while India is progressing economically and incomes of people are improving, the common man is unable to meet the medical bill whenever there is a medical emergency in the family. With penetration of health insurance remaining quite low and majority of the Indian population preferring to seek medical treatment from private sector in health emergencies by spending from their own pockets, this problem gets compounded, he added.

Naidu urged the Centre and state governments to invest more in the healthcare sector and educate people to get health insurance. Stating that providing proper medical service is the need of the hour, Naidu on Saturday said private sector investments and Public-Private Partnership (PPP) model should be encouraged more for the betterment of healthcare in the country.

“The central and the state government must together spend more in the health sector. Also people should be educated about getting health insurance. Many people in India are worried about the cost but health insurance is very much required,” Naidu said.

Observing India has made great medical advancements in recent times, the Vice-President said, “Along with strengthening our Primary Health Centres, we must explore innovative, out of box technology solutions such as tele-medicine. I appeal all the doctors to visit a School every week to counsel children on dangers of lifestyle diseases and unhealthy dietary habits.”

Pointing out that modern lifestyle has made people shun physical exercise, Naidu advocated some sort of physical exercise and spiritual activities during the day which may help keep people fresh and stress-free.  “The sedentary lifestyle of Indians have to change and doctors and scientists should educate people,” he said. Naidu said there were 69.1 million cases of diabetes in India, according to a 2015 census, and called for the need to create greater awareness among the youth about the dangers of sedentary lifestyle and eating junk food.

“The modern day lifestyle is creating serious health hazards. The doctors should indicate the people to go back to their cultural roots and follow the disciplined, systematic lifestyle. Diabetes is a major challenge faced in the country,” he said.

The groundbreaking Global Healthcare Summit (GHS) organized by AAPI in collaboration with the Government of India, BAPIO & GAPIO, as well as Host Alumni Chapters, including OGKTMA, ATMGUSA, KAMCOSA, and GMCGA, will have participation from some of the world’s most well-known physicians, and industry leaders.

A major theme and focus of the 13th annual Global Healthcare Summit is on Women’s Health. A team of physicians, consisting of women leaders of AAPI, including Drs. Sangeeta Agrawal; Uma Jonnalagadda; Soumya Neravelta; Stella Gandhi;  Swati Yalamnchi;  Pooja Kinkhabawala will lead the sessions on Women’s Healthcare Needs.  In addition, a day-long session on Rural Health Education will be held at Bharatiya Vidya Bhavan in Hyderabad on July 22nd.

Dr. Seema Arora, Chair of AAPI’s BOD, summarized some of the achievements of AAPI including the 16 free healthcare clinics, AAPI’s legislative initiatives in the US, and the ongoing collaboration with the government of India and the state governments and several NGOs in helping healthcare efficient and cost effective.

In his address, Dr. Prathap C Reddy, Founder-Chairman of Apollo Hospitals, praised AAPI’s efforts to help India through its Healthcare Summits in making policies in healthcare delivery more effective. Describing AAPI’s efforts as very significant, Dr. Pratap Reddy highlighted the Seminars and workshops at GHS and how they help train the physicians and upcoming new generation of physicians in India, by transferring knowledge and expertise.

Dr. Sreeni Ganagasani, Chairman of GHS Convention said, “The GHS 2019 features some of the biggest names in the healthcare industry, especially at the 6th annual CEO leadership forum with leaders from across the globe. GHS 2019 is being attended by over 100 opinion leaders and expert speakers from many countries across the globe to present cutting edge scientific findings as these relate to clinical practice, representing major Centers of Excellence, Institutions, and Professional Associations are represented by the invited chairs and speakers.”

According to Dr. Sudhakar Jonnalagadda, President-Elect of AAPI, the scientific program of GHS 2017? (2019) was developed by leading experts with the contributions of a stellar Scientific Advisory Board and International Scientific Committee, while the event featuring plenary sessions, interactive round-tables, clinical practice workshops, and meet the expert sessions.

Offering trainings to First Responders, a CEO Forum by a galaxy of CEOs from around the world, inauguration of AAPI-sponsored clinic, CMEs, first ever Med Quiz, cultural events, interactive roundtables, clinical practice workshops, scientific poster/research session and meet-the-expert sessions, Women’s Forum by internally acclaimed successful worm from India, a session on Public-Private Partnership featuring AAPI Healthcare Charitable showcase & innovation, are only some of the major highlights of the Healthcare Summit, Dr. Reddy said.

Dr. Ravi Jahagirdar, Past President of AAPI and a Senior Strategic Advisor of AAPI proposed vote of thanks.

Earlier on July 21st, the GHS began in the early hours of the day as AAPI delegates, students and faculties from several schools and colleges joined the “Obesity Revolution” Walkathon for creating awareness about Obesity. The walkathon had a record breaking as many as 2,000 participants. Each participant was presented with a certificate for their support and efforts to create awareness about Obesity.

“With the changing trends and statistics in healthcare, both in India and US, we are refocusing our mission and vision, AAPI would like to make a positive meaningful impact on the healthcare delivery system both in the US and in India,” Dr. Reddy said. (IANS)