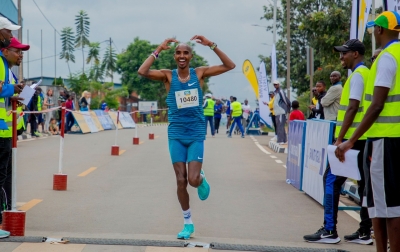 London– Celebrated England long-distance runner and winner of four Olympic gold medals in 5,000m and 10,000m events, Mo Farah has revealed he was smuggled into the United Kingdom as a kid and his real name was Hussein.

A report in Daily Mail on Tuesday said the 39-year-old, winner of both the 5,000m and 10,000m events at the 2012 London Olympics and Rio Games, was trafficked from war-torn Somalia in the UK under another child’s name after his father was killed in his home country.

The champion runner has also revealed that he worked as a domestic help for the family of “the woman who brought him to Britain”.

While all along the world knew that Mo Farah arrived in Britain as an eight-year-old and stayed with his uncle and aunt, the star athlete’s revelations in a BBC documentary ‘The Real Mo Farah’, which will be aired on Wednesday, have come as a shock.

Mo Farah says when he arrived in the UK he only knew three English phrases — ‘Excuse me’, ‘Where is the toilet?’ and ‘C’mon then’.

The athlete, who said his original name was Hussein Abdi Kahin, was enrolled in a “tough junior school in the predominantly white area of Feltham, west London, where his refusal to be cowed meant he was forever getting into fights”.

The athlete also revealed the names of his biological parents were, Abdi and Aisha.

Mo Farah’s father died in 1987 in the war when he was just four and he was separated from his mother and sent to Djibouti to live with relatives. But in 1993, he was smuggled into the UK as an illegal immigrant “under a false passport bearing his new identity ‘Mo Farah’ — a name that had been stolen from another child,” the report said.

During his first year in junior school in 1994 in the predominantly white area of Feltham, west London, he confided in his teacher, who alerted social services to his condition and Mo Farah was placed in the care of another family.

“There is a something about me you don’t know,” Mo reveals at the beginning of the BBC programme. “It’s a secret I’ve been hiding since I was a child. And to be able to face it and talk about the facts, how it happened, why it happened, is tough. The truth is I’m not who you think I am. And now, whatever the cost, I need to tell the real story.”

He then produces his visa document, and says, “Yeah that’s my photo, but it’s not my name.”

Recounting the tough times he faced in west London, Mo Farah says, “I would lock myself in the bathroom and cry and there was nobody there to help.”

Mo Farah, who was knighted in 2017, added, “I had all the contact details for my relatives (back home in Somalia) and once we got to her (the woman who brought him to Britain) house, the lady took it off me and right in front of me ripped them up and put it in the bin and at that moment I knew I was in trouble.

“If I wanted food in my mouth my job was to look after those kids, shower them, cook for them, clean for them, and she said ‘If you ever want to see your family again, don’t say anything. If you say anything, they will take you away’.”

“I often think about the other Mohammed Farah, the boy whose place I took on the plane and I really hope he’s OK. Wherever he is, I carry his name and that could cause problems now for me and my family,” he added. (IANS)