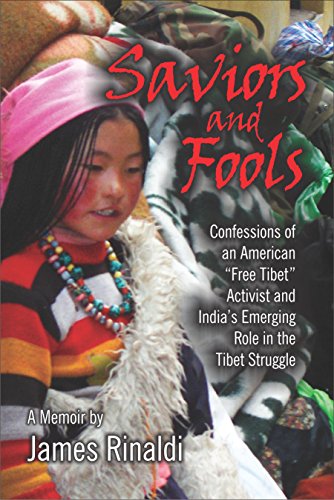 Astounding as it may sound, but the arguments put forth by the current Director of Himalayan Aid in a recent book bluntly show that the United States as well as the Western world has lost track of what it set out to achieve from the “Free Tibet” movement. And this is not all. India’s emerging role, according to the author, holds all the more significance now than ever earlier in the Tibet struggle.

In his just-released memoir, “Saviors and Fools”, James Rinaldi, who has been working with Tibetans and Nepalis for over two decades, observes that arrogance has led the West to believe that its perspectives on democracy and Tibet will eventually lead to Tibetan freedom; yet, after three decades, the accumulated mass of governmental edicts, Congressional legislative initiatives and verbal challenges to China has led to nothing more than a “worsening of the Tibetan condition”.

“You owe it to them,” writes Rinaldi. “You have been making money out of the Tibetan tragedy for far too long. Your poorly attended, token protests have no effect, and all you seem to be able to do these days is ‘raise awareness’ and ‘monitor’ the Tibetan situation. If you cannot listen and take your direction from the Tibetans themselves and work as equal partners under Tibetan leadership, then fold up, close your doors, turn out the lights and go find other ways to make a living,” he writes, in a direct reference to the US mishandling of the Tibet crisis.

Yet, with the lessons learnt from all his years of experience in dealing with the issue, the author is not entirely convinced that the US and the West should give up outright on Tibet.

“They should just learn to shut up. Shut up and get behind India,” while also ensuring an immediately stop to “using Tibet as a political pawn to try to get China to act or move” in some direction.

The Western world, according to the author, has been trying to “free Tibet” for the last 30 years but it hasn’t gone well. China remains predictably intractable towards any Western admonitions, and repression inside of Tibet has now increased to the point where Tibetans are setting themselves on fire in desperate, fatal protest.

What is actually striking about this offering is the fact that the “arrogance” of the West that Rinaldi mentions in the book was actually personified by his actions too, as he concocted wild and dangerous schemes to assist Tibetans as they travelled through Nepal on their way to India. For 20 years, operating on nothing more than a full belief in his “American exceptionalism”, Rinaldi worked with Tibet charities; helped Tibetans fleeing over Himalayan passes; and eventually saw his efforts dissolve into nothing more than a series of “brand-enhancing exercises” for the American Tibet lobby.

“Saviors and Fools” is ultimately the story of Rinaldi coming to terms with the realisation that “America and the West do not appear to have a clue” on how to help Tibet.

From his unique insider’s perch, Rinaldi levels his fire on the mistakes, hubris, opportunism and imperious political posturing that has now brought any hope for effective Tibetan advocacy by the West to a standstill. The West blew it, and Rinaldi moves forward by arguing that it’s now time for America and the West to get out of the way and let India take the leadership role.

The central argument of the book revolves around Rinaldi’s observation that the role of the US in the “Free Tibet” movement has now been confined to “charity” alone. The author admits that charity may be the only way to solve certain problems, but it does not help in forming a cultural identity or a sense of unity of purpose.

This, the re-kindling of the cultural identity and a sense of unity of purpose, according to the author, is being fostered in India for the Tibetan refugees.

“Tibetans need a voice in their own immediate, Indian future, and India needs to keep offering programmes and incentives to allow Tibetan ideas to be heard and to prosper on their own,” he asserts in his vision for a “Free Tibet 2.0”.

“Saviors and Fools” is a challenging and insightful memoir, one that is penned at the behest of self-realisation, of mistakes made and misconceptions held for decades.

The book will remain to recount the blunders of the “Free Tibet” movement to its many prospective readers, while also serving as an appropriate case-study for US administrators on where and why they go wrong again and again. The book begins a conversation that has been long overdue.