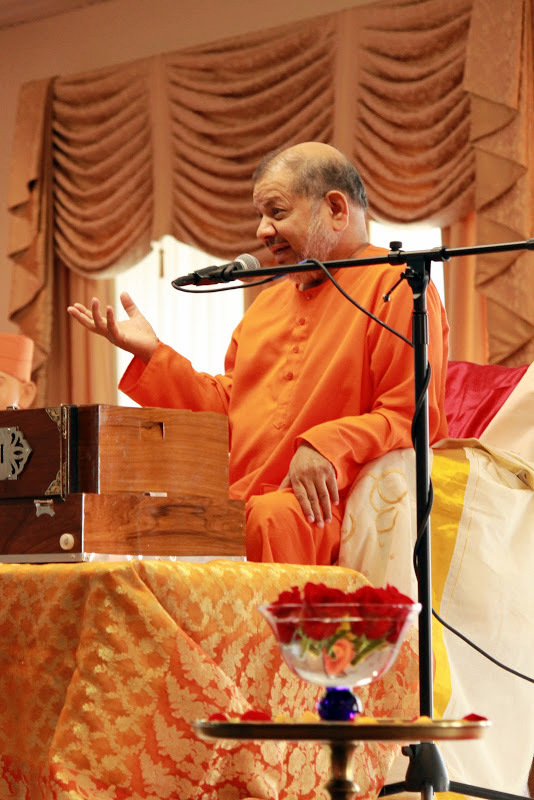 ANDOVER, MA—Spiritual leader and world-wide Chinmaya Mission head Swami Tejomayananda completed his week-long visit to Chinmaya Maruti and led Jnana Yagna and discourses on Bhagavad Gita for Daily Living and on Guru, the Guiding Light and Roles and Goals, spreading the wisdom of Vedanta throughout the world. 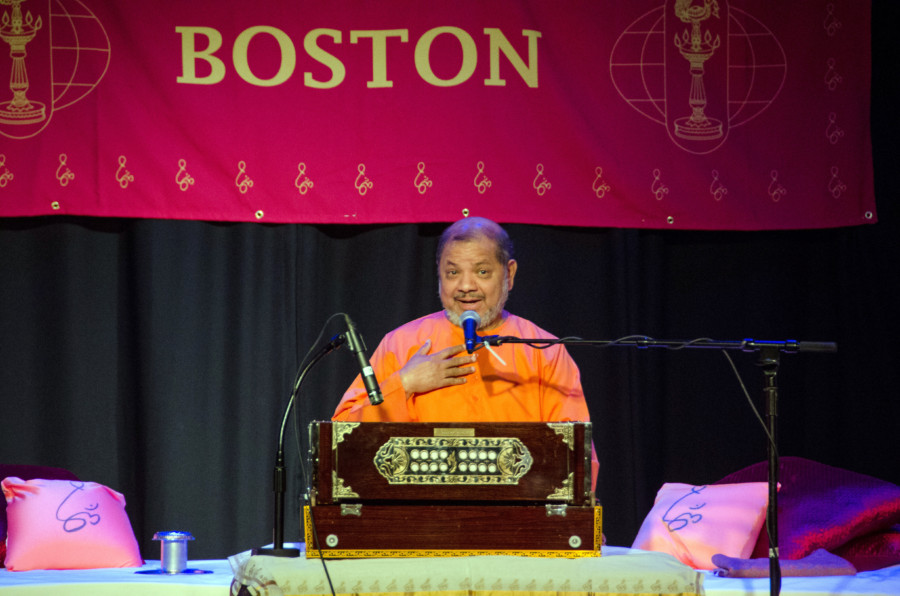 With his busy itinerary that included San Jose, Portland, Minneapolis, Pittsburgh, Dallas, London, and so on, Chinmaya Mission Boston (CMB) was fortunate enough to be part of that itinerary, hosting him from July 21st  through 26th, 2016.

This visit was extra special as it was the last Jnana Yagna conducted by Pujya Guruji in Boston before he steps down as the world-wide head of Chinmaya Mission at the end of this year. 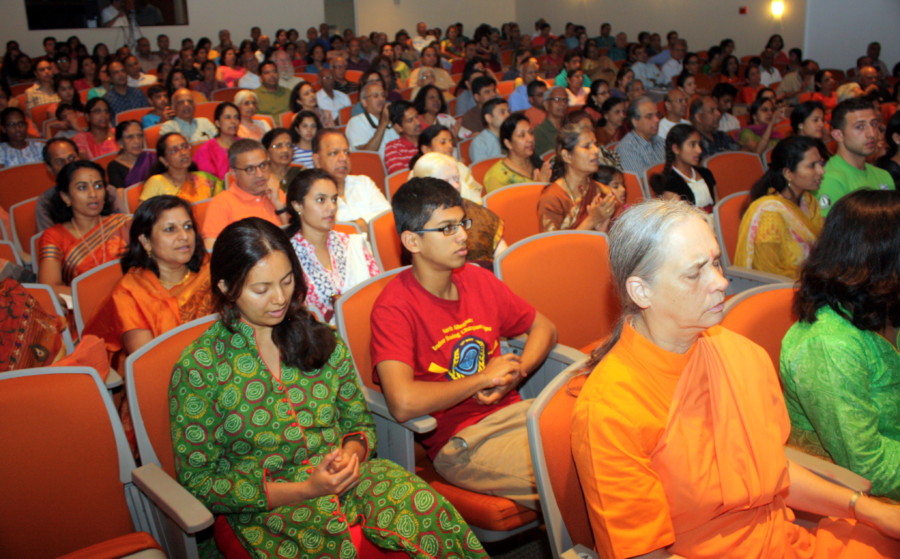 For six days, in his discourses on Bhagavad Gita for Daily Living, Pujya Guruji lovingly shared with us not just what the Gita teaches us for our day-to-day living, but more importantly the why’s and the how’s as well.

By pointing us to verses from the Gita, Guruji clearly explained how best to maintain our relationships with material things and interactions with humans, as well as why doing so would lead to a happy life.

At the Metrowest center of Chinmaya Mission Boston, Pujya Guruji gave a brilliant talk about our Roles & Goals. He started off by describing the seemingly varied roles each of us plays in our daily lives and the different goals that go along with them. By the end of the discourse Guruji had shown us how ultimately all of us have only one role and one goal – we should see the Lord in everyone (Sevak); and all our actions should be done with the attitude of worship of the Lord (Seva).

In his discourse on Guru, the Guiding Light, Guruji explained how a spiritual teacher would help us understand what is Real and Unreal in this world; how that understanding would lead us from the darkness of ignorance to the light of knowledge; and how that knowledge would free us from the fear of death.

We were also fortunate to listen to discourses on Gopika Geetam from Srimad Bhagavatam by Swami Shantanandaji, head of Chinmaya Mission West. Just listening to the beautiful meaning behind Lord Krishna’s tricks and the devotion the Gopis had for their Lord tugged at our heartstrings.

With great pride and joy, CMB members felicitated Pujya Guruji Swami Tejomayanandaji on Saturday, July 23rd for having received the Padma Bhushan, one of India’s highest civilian awards earlier this year. At the same time, Pujya Guruji released the “Chinmaya Maruti” souvenir that was brought out on the occasion of Pujya Gurudev Swami Chinmayanandaji’s birth centenary and Pujya Guruji’s visit.

All six days of spiritual discourses saw packed halls. CMB members, local non-Mission members and Chinmaya Mission members from Ottawa to Florida were in attendance. Cultural programs by CMB members preceded the evening lectures and set the tone for the evening. With Pujya Gurudev’s grace and blessings the Jnana Yagna went off smoothly and all CMB members are ever grateful to Pujya Guruji for giving us this opportunity. 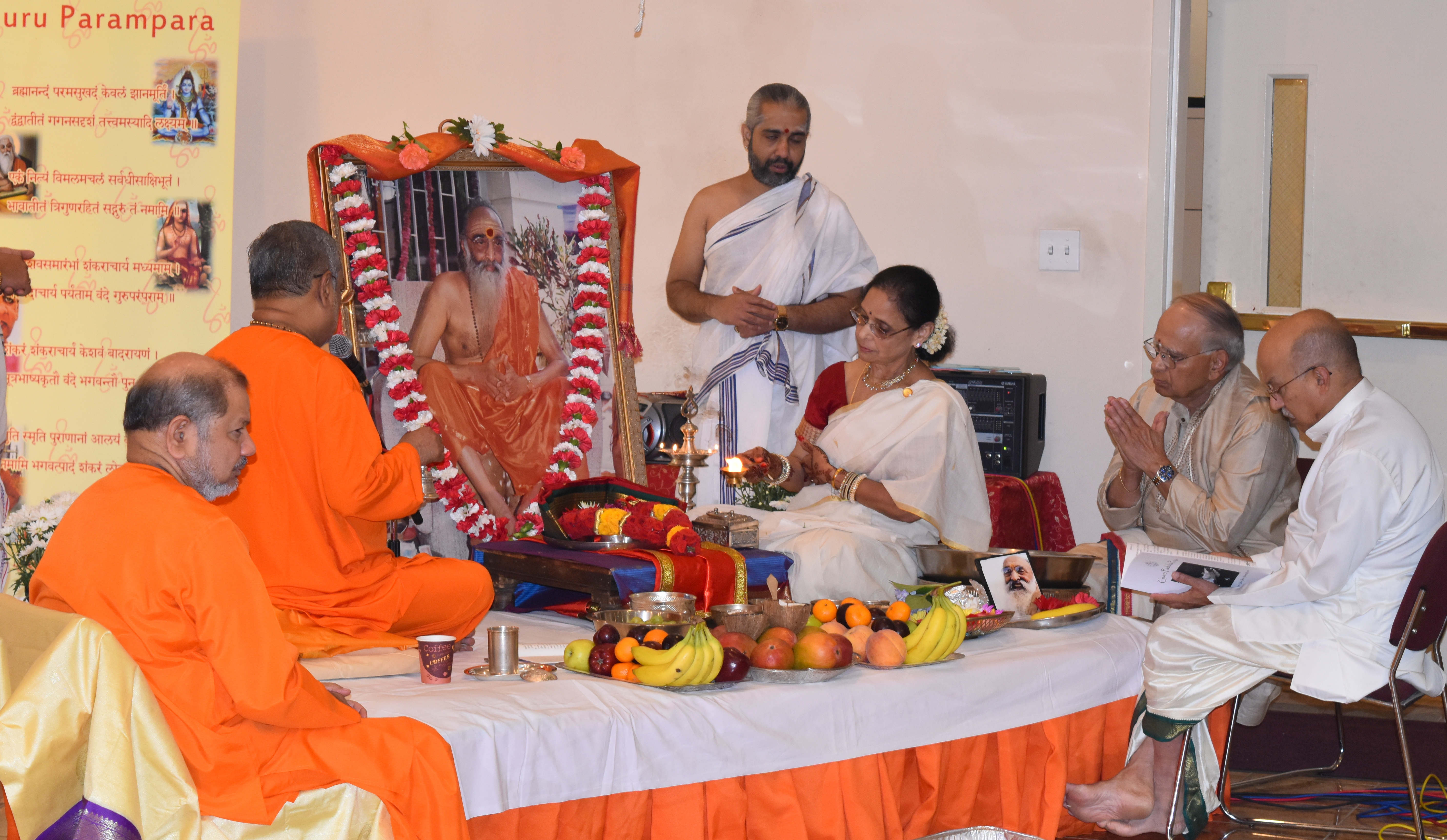