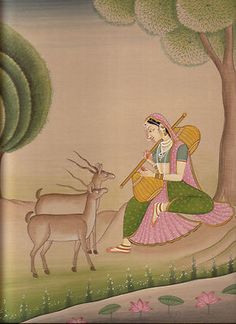 (Editor’s note: This is part one of a five-part series on music and melody. It’s written by Shekhar Shastri, a poet-musician and producer of Rāga-Rang, where Indian Classical Music meets cutting-edge melodies. This series will appear every Thursday.)

“Where does our music come from?”

“What do you hear? Chirping birds, rustling trees, humming bees, and our own breathing?”

“How did it become the music that we sing?”

“For that we have to wonder at our ancestors, who observed nature so carefully. It must have started with imitation of nature, and then slowly, over centuries transformed into a language of music.”

That was a conversation I had many years back with the genius musician Pandit Jasrāj, as we were walking in a garden.

In Nāṭyaśāstra, the ancient Indian treatise on the arts, there is a story of Sage Svāti. One day, he went wandering through the forest to a pond full of lotus flowers. Just then, it started raining and the sage watched with fascination as raindrops fell on the lotus leaves in the pond. On his way back, he tried imitating the sounds he heard; he was thrilled both by the pitch and the rhythm of the falling drops. He longed to create an instrument that would reproduce tuneful rhythmic variations. He then sought the help of Viśvakarmā, the celestial architect. Together they designed the first mridangam.

The structure of the human body was likely the inspiration for the musical instrument Veenā. Its big bowl, finger- board, fret, pegs have been compared to the human head, spinal column, vertebrae, and the mind respectively.

So, is art simply an imitation of nature, or is it something beyond? This common question is answered beautifully in Sukrâcârya’s Sukranitisàra : ‘What is visibly manifest in nature is due to the limitation of the senses; to get to the full wholeness of form, the artist should meditate; he must dive deep beyond, and bring out the deeper essence.’ 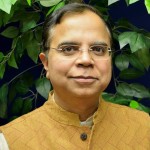 Ananda K. Coomaraswamy, the art historian, has stated that, ‘the Classical Indian artist was not driven to create an imperfect likeness of nature but a pure ideal that symbolically captured the eternal and the infinite without getting distracted by the accidental and unessential.’

According to Coomaraswamy, ‘the artist reaches across paradox with a singular commitment to stimulate imagination and give dignity to the ordinary. In doing so, the artist delivers to the audience an experience that is way more suggestive than the fact itself.’

The sun is setting, and as I conclude my walk around the reservoir, I am swept away in the commotion of the birds returning home, the kaleidoscope of reflections on the frozen waters, and the lingering image of raindrops falling on the lotus leaves -bringing a renewed rhythm to my journey home.