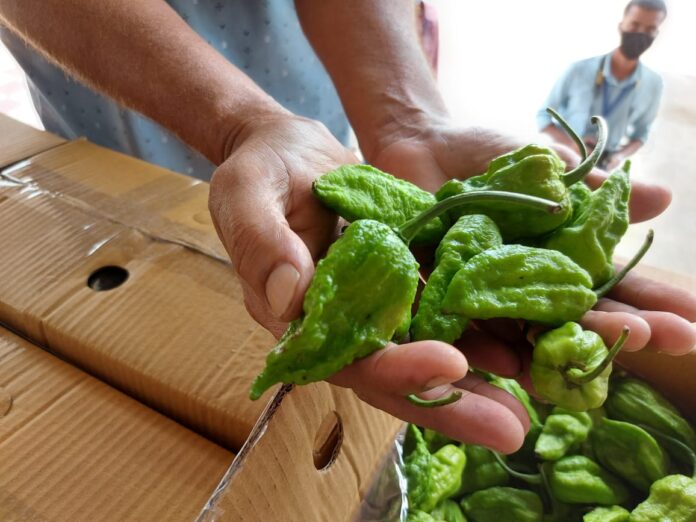 Guwahati/Kohima–“Bhut/”Bhoot Jolokia”, one of the hottest chillis in the world, was on Wednesday exported, for the first time, from Guwahati to London.

Similar to “Naga jolokia”, “Raja Mirchi”, “Naga Morich” and “King chilli”, grown in Nagaland, Assam, Arunachal Pradesh, and Manipur, it was declared the hottest chilli pepper in the world by Guinness World Records in 2007.

Airports Authority of India officials said that the chilli was formally exported to London from the Lokapriya Gopinath Bordoloi International Airport in Guwahati via an Air India flight.

AAIs Regional Executive Director Ravi Kant said that this occasion is special, because “Bhut Jolokia”, which has been conferred a GI tag for being the unique product of the northeast India, is getting exported from this region.

“We are very much enthusiastic that the cargo export potential from the airports in the northeast region would grow benefiting the local food producing organisations, specially the farmers. The AAI has developed standard facilities in air cargo complex for enabling export of NER produce to the domestic as well as international markets,” he said.

According to the AAI officials, the international cargo facilities at Guwahati airport is ready to handle 700 MT cargo with Customs, and EDI connectivity to process export and import shipments by positioning plant quarantine desk, cold storage, dangerous goods shed and all the necessary security equipment like CCTVs, door frame metal detector, etc.

Plant Quarantine Station, Guwahati, Assistant Director, Vageesh Pandey said that he is very delighted to issue a Phytosanitary Certificate for “Bhut Jolokia”, which is going first time from Assam to the UK.

“This certificate is globally acceptable for plant and plant products from our country to any foreign country. The certificates are issued by the Directorate of Plant Protection, Quarantine and storage, Plant Quarantine station, Guwahati,” he said.

Pandey said that three shipments of organic Assamese lemon were also certified and sent to the UK a couple of days before and a betel leaves shipment was also being exported there.

“On Saturday, we plan to send colocasia to the UK and from the next week we would be certifying daily one or two shipments from the region to all European countries,” he added.

AAI’s Cargo wing Deputy General Manager Nazeer A.S. Basha said that “Bhut Jolokia” or the Naga Chili is procured from Nagaland which consists of 250 kg sample shipment, along with 500 kg of betel leaves proceeding to London from the Guwahati air cargo complex.

He said that last month, 1,200 kg of Tripura’s jackfruits exported to Frankfurt and perishable cargo were regularly being exported to London, Dubai, Hong Kong and Frankfurt from the LGBI airport.

“Under the Krishi-UDAN, the NER airports have sent around 2,000 MT of agri products and fruits including lemon, ginger, betel leaves, vegetables of various types to mainland India and also exported to various foreign destinations by offering 50 per cent subsidy on freight and storage charges under the Government’s ‘Operation Green’,” Basha said.

“This is a boon for the farmers of NER which would help to grow their business and to double their income.” (IANS)