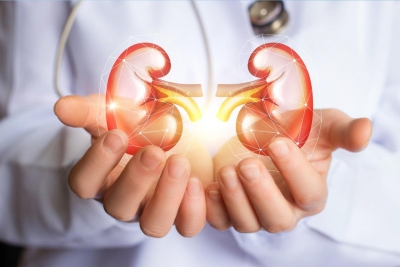 New York– Researchers at University of Alabama at Birmingham, US, have successfully conducted transplant of pig kidneys into a brain-dead human.

In the days long experiment, the organs implanted on a 57-year-old male brain-dead patient, produced urine and were not rejected.

However, this is not the first such surgery.

In September 2021, a study published in the American Journal of Transplantation, showed a transplantation of a gene-edited pig’s two kidneys onto a brain-dead patient.

According to scientists at UAB, their surgery is unique as many medical science advances underlie it, including the 10-gene pig.

The major question is can a kidney from a pig tolerate an adult human environment.

Blood pressure is one hurdle because non-human primates and pigs have lower mean arterial blood pressures than adult humans.

Without the human preclinical model, surgeons could not be sure that vascular integrity would hold up after the transplant.

Equally important, the UAB researchers said, was the relative hemodynamic stability of the decedent upon reperfusion, indicating that washout of inflammatory mediators from the xenograft did not provoke cardiovascular collapse.

The experiment also tested whether life-threatening complications might occur during surgery.

“By actually doing this transplant, we were able to show that you could take a kidney from a pig that had been genetically modified, put that into an adult brain-dead human and actually have it hold its integrity, so it perfused normally, just like a human allograft,” said transplant surgeon Jayme Locke, also a Professor at the Department of Surgery Division of Transplantation.

“The vascular anastomoses stayed intact, and we didn’t have any major bleeding episodes, all things that are important to establish in a preclinical human model before we take this into living humans,” Locke said.

The knockouts were performed to prevent rejection as well as to prevent the kidneys from growing too large in the recipient.

The human genes added to the pig were also meant to help prevent rejection, whether immediate hyperacute rejection or even slower types of rejection that can occur up to months or years after transplantation.

The NYU Langone researchers primarily tested the viability of the single kidney.

Although the transplanted kidney filtered waste and produced urine as was expected, it was attached to a blood vessel in the recipient’s upper leg rather than implanted in the abdomen.

In contrast, a full clinical transplant procedure was performed by the UAB team: from assessing organ compatibility to removing the recipient’s kidneys and replacing them with the xenotransplants.

The researchers also ensured that the donor pig was raised in a pathogen-free facility. (IANS)