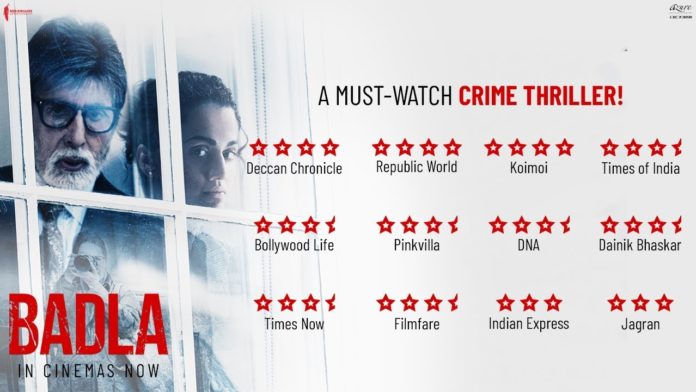 The phonetic distance between badla, the Hindi word for revenge that serves as the deliciously filmy title of this delicately drawn whodunit, and Badal, the name that the lawyer-protagonist is known by is easily bridgable. The craftily-plotted whodunit shows us why vendetta is best served cold. It unfolds in snowcapped England, you see.

Amitabh Bachchan plays Badal Gupta, a hotshot lawyer on the verge of retirement who has never lost a case. Badal goes for the kill when he is invited to look into a case of a murder accused, a nonchalant imperturbable married woman named Naina Sethi whose morals are so reprehensible they make Indrani Mukerjea seem excusably misguided in comparison.

Kudos to Tapsee Pannu for playing a woman who won’t stop at anything to get what she wants. It shows the expanding moral spectrum of celluloid heroism to see a female protagonist so low in the conscience department, and it is a pleasure to see Pannu so good in being bad.

But why must she smoke to prove her disregard for moral values? I thought smoking for vamping went out of vogue with Shashikala.

But I am straying. A crime this film about unforgivable crimes, never commits. To the point and on the ball, Badla is a concise gripping cat-and-mouse concoction where lawyer Bachchan and the accused Pannu play off against one another with feline stealth, one never willing to acquiesce to the other’s persuasive arguments, so that in no time a swirl of accusations come hurling at us without the plot giving away anything. The dialogues tell us everything the characters want us to hear without giving away the truth.

Sujoy Ghosh, it seems, has adapted a Spanish film “The Invisible Guest”. I suspect the suspect-motive-crime-denouement graph in the original must have been very different. Badla contextualises the murder to fit into the ambit of adultery. Pannu’s entrepreneur-heroine has a loving family of devoted husband and adorable little daughter. Why would she break the domestic idyll to have an affair with an anglo-Indian Arjun (Tony Luke) who must wear cross around his neck even while bearing it (the cross, I mean) and who speaks with a thick Bandra-Catholic accent that tends to take away from the gravity of the crisis on hand.

Arjun’s peculiar diction is the least of the problems in the narrative. Ghosh fills up the frames with an implosive tension. Most of the time there are just Bachchan and his accused (far from a victim) talking, exchanging barbed words and slanted glances that give nothing away. Both the actors are adept at using words to express more than just what they want to say. There is a third crucial character, played by the powerful Amrita Singh who makes even an offer for a cup of tea seem like a stern rebuke. It’s a pity that there isn’t much of Singh with Bachchan together. What I wouldn’t give to see that Mard-slinging!

Cinematographer Avik Mukhopadhyay captures the scenic splendour of the English countryside without allowing the characters to look subservient to their environment. Handsomely shot and as sharply cut as a Saville Row suit, Badla is a unique blend of suspense and chamber-piece. The verbal exchanges between Bachchan and Pannu play a curious mind-game with the perception of guilt and retribution.

At the end Sujoy Ghosh captures two vital faces staring out of a window. They remind us of how important characterisation is to a tightly-wound plot, and how easily a suspense drama can come undone in the wrong hands.

Not this one. (IANS)