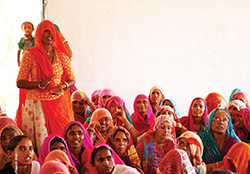 Since 2012, December has become synonymous with a rally of activity around women’s safety. We, however, need to look beyond the month.

A while ago, when Prime minister Narendra Modi launched the ambitious Make in India and Skill India campaigns, one could not help but wonder when we would witness a much needed Safe in India mission.

Statistics put the female workforce participation rate at 27 percent. The government has emphasised the need for increasing women’s participation in the workforce in its various strategies. Social norms and orthodox attitudes are often cited for these poor figures, but one rarely acknowledges the fact that women in India do not feel secure enough to participate freely in any sphere — social, political or economic.

Cases such as the rape of the physiotherapy intern, the photo journalist in Mumbai or the BPO worker in an Uber cab in Delhi lead to sporadic rhetoric about women’s safety and then die a gradual death. What remains constant after the media hue and cry has subsided is a feeling of fear among women and the backlash they face when they raise their voice for their rights. A single instance of violence against one woman in India crushes the dreams of several girls who want to study, work, play and enjoy the freedom that our constitution guarantees them.

Also, contrary to the alarm raised by many about the streets being unsafe for women, a majority of the violence happens within the four walls of the home. According to data from 2013, in 97 percent of rape cases, the accused was known to the victim.

A number of initiatives have been taken to stem the tide of violence in both the public and domestic spheres. The Dowry Prohibition Act, the Protection of Women from Domestic Violence Act, the Criminal Law (Amendment) Act and the Sexual Harassment of Women at Workplace (Prevention, Prohibition and Redressal) Act and fast track courts are the foremost legal initiatives.

However, besides legal remedies, which are often ineffective due to the complicated, lengthy and expensive procedures, technology can go a long way in providing aid to women, if used effectively and as a supplement to other measures.

Women’s helplines and safety apps are two resources which have been launched in recent times and possess the potential to make a large-scale impact.

In India, several numbers are dedicated as women’s helplines. Some of these numbers such as ‘181’ are run by the Delhi government and were specially set up within the Chief Minister’s Secretariat. Other numbers such as ‘100’ and ‘1091’ are under the direct control of the police control room and yet others such as ‘103’ are run or supported by civil society organizations.

Currently, the various private and public helplines in India are divided by the nature of support sought – police, fire services, ambulance, legal aid or counselling – and by geography (city and state). Some critics have pointed out that having multiple women helpline numbers across the country is a limitation to gender justice due to a lack of Standard Operating Procedures. Also, in the absence of one single helpline like 911 in the United States awareness regarding helplines is low and often confusing for women.

To address this concern, the central government has launched a scheme to universalize these helplines by releasing a single all India helpline.

The scheme for ‘Universalisation of Women Helpline’ was approved by the government of India on February 19 for implementation through States/UTs with effect from April 1. It envisages 24-hour emergency and non-emergency response to all women affected by violence in both public and private spheres, including in the family, community, and workplace.

The idea is to unite all the helplines for women under a single number – 181. In addition to helplines, several safety applications available online provide emergency support to women with smartphones and internet connectivity.

However, when compared, apps which conduct safety audits are more comprehensive and also go beyond providing emergency support. Perhaps the biggest advantage that auditing tools offer is the potential to include the community in the process of auditing. The safety audit is a simple methodology of delineating exactly what factors make a particular public space feel more or less safe.

The tools when used by citizens can gather information about safety in their localities which can then be used by public authorities for better planning and governance. What this technology offers beyond large-scale information for helping stakeholders to plan safer localities is a chance to bring about an attitudinal shift in the community living together.

For women to feel safe and accepted, a shift needs to be perceptible in society. Women need to feel accepted for coming out of their homes, working, walking around at night and in general enjoying the same rights and freedom that men take for granted.

Combined with legal and technical measures, measures to bring about progressive thinking can go a long way to contribute to public spaces and homes that make our girls feel secure, welcome and valued. However, a lot will depend on what we prioritise as a nation and perhaps it’s time to put “safe in India” before other campaigns, because a nation where half the population is discriminated against can never fully grow and reap its potential.

( In arrangement with IPE Global, an international development consulting group where N. Hamsa is Policy Lead and Divashri Mathur, Senior Research Associate, Policy Team (Women & Girls). The views expressed are those of authors.)