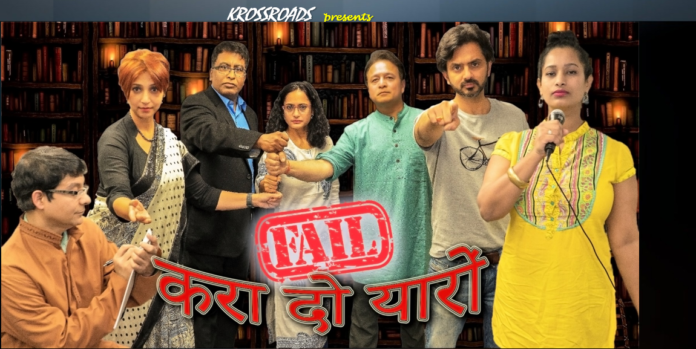 BURLINGTON, MA—Krossroads, a contemporary theater group that thrives in multilingual original plays in the Boston area, will present a comedy Hindi drama “Fail Kara Do Yaaro” during the Hindi Manch’s National Hindin Convention on Saturday, Dec. 1 in Burlington, MA.

This is an original play that is scripted and directed by Jayati Banerjee and Amitabha Lala. The play will be staged at 12:00-1:00 pm on Dec. 1 at Francis Wyman School Auditorium in Burlington.

Krossroads, founded by Ms. Banerjee, in its theatrics believes in original story telling, stories which are inspired by contemporary lives and life experiences which guide people’s vision towards theatre.

“As we keep moving in life and come across many crossroads, stories are born and in one life we live many lives,” Ms. Banerjee said in a statement. “It depicts who we are, what we believe, and what we do when we are alone with our truest, most authentic self.  The focus is mainly on the lives of the immigrants, from the Indian subcontinent, and their following generations.”

Inspired by an age old Hungarian play by Fritz Karinthy, “Fail Kara Do Yaaro” is a comedy which is mixed with shades of satire. It’s a story of a dejected middle-aged man; who despite having a degree in education finds himself struggling to match up with the system and overall finding himself unsuccessful in life. In his opinion he finds his college and the professors where he got his education as responsible for his poor lifestyle.

If a degree does not give you the value you spent your life on, what is its worth? He walks up to his college principal declaring that he is a failure in life because of the education he has received, and thus demands that the college to give him all the tuition fees paid to date. The man forces the perplexed professors to reexamine him for all the subjects -where he is determined to ‘fail’ the exams, thereby proving his point.

Will the professors succumb to his demand? Or the man going to return empty handed? A hilarious drama unfolds as both sides get ready to face-off each other to prove their own viewpoint, be it right or wrong.