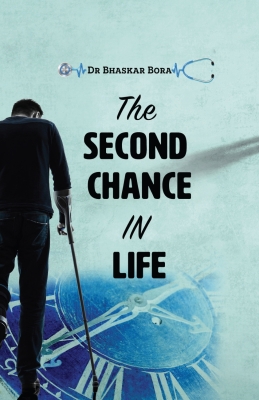 New Delhi– When life gives you lemons, they say make lemonade. It’s not a typical journey documenting a man’s life from grass to grace or discussing how hard work and perseverance always pay off in the end; nor is it a story about how one poor man became rich and famous. “The Second Chance in Life” depicts a story of bravery, vision, and a never-say-die attitude in the face of life’s most difficult challenges.

The book tells the story of Dr Bhaskar Bora, who nearly lost everything after suffering a spinal cord injury that left him paralysed from the waist down. Nothing made sense any longer; the deck was stacked against him. In his forties, Dr. Bora was already a successful man by any standard. After graduating from Gauhati Medical College and Hospital and working in a variety of odd jobs and businesses, the ambitious young man moved to the United Kingdom in 2004 and rose to become a well-known medical practitioner, acquiring five medical practises and increasing their turnover from 480,000 pounds to 2.3 million pounds in just seven years.

Life was wonderful, with a wonderful family to top it all off, until tragedy struck. In 2019, he suffered a severe spinal cord injury as a result of a botched spinal surgery. It’s ironic that he should be a victim of medical complications despite being a medical doctor himself. This resulted in the paralysis of both legs, a non-functional right hand, and a lengthy hospital stay, and only two months later, he was diagnosed with thyroid cancer and told he needed more surgery.

“When I first experienced this life-changing event of the spinal cord injury, my initial feelings were frustration, confusion, and fear of the future. It took some time for me to adjust. Perhaps being a doctor was both a blessing and a curse. Good because I had counselled a number of patients who were in similar situations. But it’s bad because I recognised the gravity of the situation and what was at stake ahead in the future,” he says.

Dr Bora hopes that his book, “The Second Chance in Life”, would help to amplify his voice and give hope to disabled people out there who may think it is the end of the road for them. The book is a message of hope; a trigger for the downtrodden to rise through the ashes, become everything they desire and turn adversities into opportunities. (IANS)