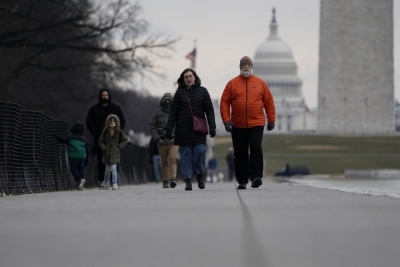 Washington– Amid a resurgence due to the new Omicron sub-variant, the number of daily Covid-19 vaccinations in the US has fallen to the lowest level since the early days of the inoculation campaign in 2020.

The seven-day average of vaccine doses of all types administered in the country dipped to 127,000 per day this week, Xinhua news agency reported citing data tracked by The Hill news outlet.

This marked a steady decline since January, when more than 1 million shots per day were being administered.

The seven-day average number of administered vaccine doses over the past week was a 27.1 decrease from the previous week, according to data of the Centers for Disease Control and Prevention (CDC).

Till date, about 255 million people, or 76.8 per cent of the total US population, have received at least one dose of a Covid vaccine.

About 217.2 million people, or 65.4 per cent of the total population, have been fully vaccinated, CDC data show.

However, less than half of the total booster-eligible population were yet to receive a booster dose.

Experts said booster shots are particularly important in the face of the Omicron variant, which has a greater ability to evade the protection from two doses of the vaccine.

The lagging rates in Covid-19 vaccinations and boosters left the US more vulnerable to a potential new increase in cases, as is starting to happen in Europe, even with higher booster rates in many countries.

“Periodic reminder that U.S. booster coverage is terrible, especially considering most in this group are not opposed to vaccines in general and many are high risk (age or otherwise),” tweeted Jason Schwartz, a professor at the Yale School of Public Health.

Amid the slowdown in vaccinations, the BA.2 sub-lineage of the Omicron variant is steadily gaining its ground in the country, with infections almost doubling each week in February, CDC data show.

The BA.2 variant now makes up over one third of new Covid-19 infections in the US. This data is up from 22.3 per cent a week prior, and 15.8 per cent two weeks before.

In the northeastern part of the country, BA.2’s prevalence has surpassed 50 per cent.

The rapid spread of the variant coincided with the start of the allergy season, which may complicate symptoms and delay timely distinction.

With Covid-19 cases rising in parts of Europe and Asia due to BA.2’s rapid spread, scientists worry that the variant may soon push cases up in the US too.

Anthony Fauci, the nation’s top infectious disease expert, said he expects “an uptick in cases” due to BA.2, but not necessarily a massive surge like other variants have caused.