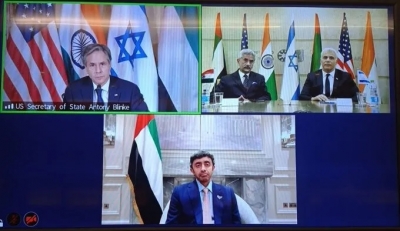 New York– Meet “I2-U2”, the latest entry into the international alphabet soup of acronyms, which stands for India, Israel, the United Arab Emirates (UAE) and the US.

US Secretary of State Antony Blinken used the I2-U2 moniker on Sunday for the four-member grouping that was launched last October at a virtual meeting comprising himself, India’s External Affairs Minister S. Jaishankar and Foreign Ministers Yair Lapid of Israel and Sheikh Abdullah bin Zayed Al Nahyan of the UAE.

I2-U2 even has a populist ring rhyming with R2-D2, a robot in the Star Wars movie franchise.

“We have something, for example, called I2-U2, which we launched last October, together with our Emirati and Indian counterparts,” Blinken said at a news conference in Jerusalem, referring to the four-member grouping that could be the beginning of a Middle East Quad, but now has an acronym of its own.

Blinken praised Lapid for his “remarkable leadership” in “spearheading new areas of cooperation” like the I2-U2.

At their I2-U2 meeting, the Ministers had discussed “future opportunities for collaboration in the region and globally” and “expanding economic and political cooperation in the Middle East and Asia, including through trade”, according to a US statement after their talks.

The group does not have a military angle to it and the Minister only spoke of cooperation in maritime security, which is mostly about preventing piracy and terrorism.

The I2-U2 meeting had followed the Abraham Accords, through which Israel normalised relations with the UAE, Bahrain, Sudan and Morocco.

The Abraham Accords takes its name from the Jewish Patriarch Abraham who is claimed by Judaism, Christianity and Islam as their spiritual fountainhead.

India has backed the Abraham Accords reached in the final days of the administration of former President Donald Trump through the efforts of his son-in-law Jared Kushner.

President Joe Biden is continuing that diplomatic effort and Israel hosted this week a meeting of the top diplomats of the US, the UAE, Egypt, Morocco and Bahrain.

Blinken, Lapid, bin Zayed Al Nahyan and Foreign Ministers Morocco’s Nasser Bourita, Abdullatif bin Rashid Alzayani of Bahrain and Sameh Hassan Shoukry of Egypt met for what is called the Negev Summit in the Israeli town of Sde Boker to build a “new architecture” of capabilities, as Lapid described it.

But showing a rift with the US that is trying to revive the Iran nuclear deal, Lapid said that it “intimidates and deters our common enemies, first and foremost Iran and its proxies”.

Israel and the four Sunni states are opposed to Shia Iran and the nuclear deal.

Trump had pulled out of the agreement, which was meant to limit Tehran’s nuclear weapons capabilities while loosening some of the sanctions imposed on it.

Another area of difference also surfaced at the Negev meeting with US and the Arab states pressing Israel to make a deal with Palestinians.

Blinken said: “We have to be clear that these regional peace agreements are not a substitute for progress between Palestinians and Israelis.” (IANS)