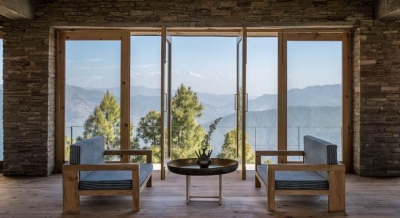 New Delhi– The Kumaon is a transformative luxury retreat in Uttarakhand’s Kasar Devi region. It is surrounded by spectacular undulating hills and rich biodiversity, with breathtaking views of the Himalayan range.

Dr. Vikrom Mathur, one of the owners, has a long history with the region and has spent the last 20 years researching and writing about environment, society, and development. The Kumaon’s genesis is rooted in his passionate beliefs as well as his interest in the region’s ecology and its relationship with the culture and livelihoods of Kasar Devi’s local communities.

The property is based on the abstract modernism principle of responding to the natural landscape and environment. The spaces are constantly referencing the outdoors, and a minimalist palette is used to highlight the picturesque backdrop. The Kumaon’s low-intensity development encourages privacy and quiet, allowing residents to create their own interpretations of the breathtaking landscape.

The retreat is set on two acres of lush greenery, with ten magnificent chalets nestled in pairs and named after villages in the Kumaoni region. Each one offers breathtaking views of the mighty Nanda Devi range. The lower chalets are made of locally quarried stone and are modelled after local village homes, while the upper chalets are made of fly-ash bricks clad with bamboo sticks and copper wire. All of the chalets face north and have spectacular views of the valley and mountains, with the sun illuminating different aspects of the landscape as the day progresses.

The sustainable architecture emphasises locally sourced materials such as bamboo, copper, and stones, which have been extensively used across various structures and spaces using various local techniques and skills from the region. The materials have been allowed to retain their natural qualities throughout the retreat’s various spaces and have become an integral part of the design language.

The tranquility of the Himalayas and outward-looking modern spaces, woven together with warmth in hospitality and perceptive service, make it a transformative experience in Uttarakhand’s hills.

The overall experience is immersed in nature, deeply rooted in the region’s distinctly diverse flora and fauna, which is a haven for the elusive Leopard, Blue Magpie, Himalayan Cedar (Deodar), Rhododendron, and many other species.

With the property as a base camp, one can explore the rich biodiversity and uncharted landscapes. A diverse range of tailor-made nature walks and trails allow guests to connect with the Kumaoni region’s cultural history and natural heritage. From surreal village walks or treks through the lush forests to nearby local temples and trips to the nearby Binsar wildlife sanctuary, each excursion reveals a new dimension of the location.

Seasonal produce and healthy local ingredients, sourced from nearby village farms and foraged from the forests, are an important part of The Kumaon’s culinary experience. Guests can also enjoy breathtaking views of the snow-capped Nanda Devi range or the star-studded sky from their own chalets, unwind in the main lounge or cosy library room by the fireplace, rejuvenate at the spa or unwind with yoga on the terrace, or indulge in culinary indulgence at the striking cantilevered restaurant suspended over the valley below.

The property is situated in the charming Gadholi Village of Kasar Devi, a picturesque ridge above the city of Almora in Uttarakhand, which has long been known for its rich history.

The people of the Kumaoni region exude a genuine, instinctive warmth, and many locals who worked on the site were seamlessly accommodated and trained into various technical roles at The Kumaon, where they remain a part of the core service team. Many have incredible stories to tell about their transformations from masons to The Kumaon’s anchors of heartfelt hospitality and service. (IANS)