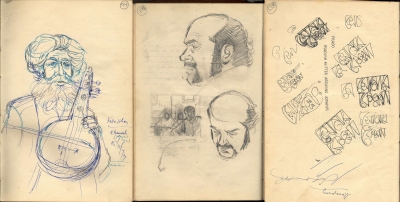 New Delhi– Penguin Random House India has acquired two unpublished titles by award-winning writer and filmmaker Satyajit Ray — ‘Feluda in the Golden Fortress‘ and a collection of essays and interviews — that will be released under the aegis of The Penguin Ray Library from 2023 onwards.

The Penguin Ray Library hosts an incredible series of the maestro’s unpublished and curated works published in association with The Satyajit Ray Society.

‘Feluda in the Golden Fortress’, is an English translation of Ray’s original cult detective mystery novel titled ‘Sonar Kella’. First published in 1971 in Bengali, this book was also adapted to screen and was the first film adaptation of Ray’s famous ‘private detective’ Feluda, which he not only directed but also wrote its screenplay and composed music for it.

In the book, Mukul, a young boy, is persistently haunted by incidents from his birth. When his father takes him to a renowned parapsychologist (Dr. Hemanga Hazra), he studies the boy’s drawings and believes the sketches depict the Indian province of Rajasthan. He also suggests taking the boy there.

Meanwhile, a group of brigands get to know about this boy and believe that he could lead them to a treasure that they have been hunting for a long time. They kidnap Mukul and now, Feluda along with assistant Topse must bring back the boy and solve the mystery. They are joined on road by Lalmohan Ganguly, a pulp writer who goes by the non de plume, Jatayu.

Edited by the maestro’s son Sandip Ray, ‘Feluda in the Golden Fortress’ comes with previously unseen translation of the story by Satyajit Ray. With line drawings and illustrations from Ray’s sketchbook and a comprehensive introduction, this will be the ultimate Feluda book.

“Being the first Feluda movie, ‘Sonar Kella’ is both mine and baba’s favourite. The plot, the locale and characters are spectacular. This book will contain some never-seen-before archival material, including writings, illustrations and photographs from this iconic film. I am sure this will be a treat for all Ray lovers across the globe,” Sandip Ray, Member Secretary, Satyajit Ray Society, said.

The second title is an exceptional collection of essays and interviews of the maestro, selected, edited by Sandip Ray and opening a rare window to Satyajit Ray’s life, philosophy and works. This book will release in 2024.

Premanka Goswami, Executive Editor, Penguin Random House India, said ‘Sonar Kella’ is one of the most popular stories of Ray, “which is loved by everyone. This translation is going to be a landmark event for all of us. Moreover, the previously unseen sketches, illustrations and additional writings will be the ultimate package, which is a great news for the Ray enthusiasts. Furthermore, the book of essays and interviews is going to be a treasure trove. We’re thrilled and honoured to publish these books from Penguin.”

Launched in 2019, The Penguin Ray Library is a series of Satyajit Ray’s work, published and presented with a distinct identity, special layout, and quintessential aesthetics, all inspired by Ray’s sensibilities.

The Penguin Ray Library captures the brilliance of the Renaissance man, is a collectible for fans and the right kind of introduction for the uninitiated. In association with the Society for the Preservation of Satyajit Ray Archives (Satyajit Ray Society) and the legal estate of the Ray Family, Penguin aims to bring the master’s work to a wider readership. Since the launch, Penguin has published one new title, redesigned eight previously published titles and in addition to the new acquisitions has four new titles in the pipeline. (IANS)