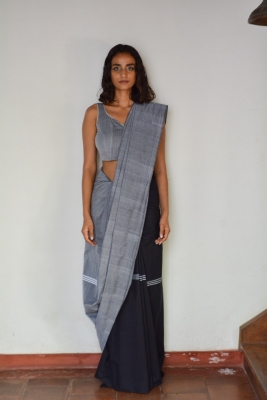 New Delhi– Vidhi by Save The Loom, is a collection of saris made for female lawyers, whose strict dress code reflects how professional India still needs to become more female friendly.

Claire Huxtable (‘The Cosby Show’), Helen Gamble (‘The Practice’) and ‘Ally McBeal’, were just some of television’s fictional legal women who were my style icons growing up. It was about more than their sharp sense of style; it was the fact they were fearless and stood out in a man’s world.

While their wardrobes were full of colour, in India, all lawyers are restricted to wearing black, white and grey. It’s a monochrome uniform that has pretty much been around since the days of the British Raj. The coat that lawyers need to wear over their own clothes, can mean wearing a sari feels cumbersome, especially in the Indian climate conditions. The history of the ‘Black Coat’ dates back to 1327 when King Edward III stipulated costumes for judges based on the “Dress Code” for attending the “Royal Court”.

But this never stopped Justice KK Usha, the first Malayali female judge of the Kerala High Court and subsequently its Chief Justice from becoming a champion of women’s rights throughout her career. She passed away at the age of 81 in October 2020. She wore her woven saris with her signature red bindi. “Vidhi by Save the Loom” is a range of saris made in handloom cotton for lawyers– Justice Usha inspired and initiated the idea.

These soft saris, fall perfectly without starching; they have a feel of fashion but look very professional. They are woven to ensure that female lawyers look cool as they battle it out in the courtroom. It took much time and research for these pieces to be designed and launched on May 4, 2021, which is the 116th birth anniversary of Justice Anna Chandy, the first female advocate in India.

“Save The Loom” is a social impact agency that has been working with weavers of Kerala ever since the floods of 2018 and was the brainchild of journalist and former consultant to the Fashion Design Council of India, Ramesh Menon. This collection may be designed for lawyers, but women with an appreciation for handlooms may want to add one of these saris to their collection. Menon tells more about this range of handloom saris:

Q:I believe Justice KK Usha was the inspiration-she seems to have a trademark style with her large red bindi and silk saris.

A: She had a motherly charm and energy, a vibrant and gracious personality, someone who spoke for women rights and for the underprivileged. Justice Usha during her long career and travels found a great love for crafts and handlooms and handed over many of those narratives to us during the many meetings. We unfortunately lost her last year in October, and Vidhi — our line of sarees and textiles was born as a tribute to her legacy and community work done by her in over six decades.

Q:How has the response been from lawyers?

A:We spent a good six months last year talking to women lawyers across the country and analysed their feedback to develop a line. Once the first lot of designs were woven, we went to lawyers of all age groups — the seniors who revere the saree, and the young who have never woven, took their feedback, and incorporated that as well. The dress code is sacrosanct, even though there is a large debate on its relevance in its current form which has been a hand over from the British era.

Q:Do you expect female lawyers from all regions of India to buy Vidhi?

A:We have ventured into a space that can provide regular work to weavers, not just within Kerala but elsewhere too. We are a small unit and are not geared to cater to a larger demand. We are hopeful that Vidhi can set out as a trend and the artisan community elsewhere can take off from there.

Q:Would this sari work well for women in other professions too?

A: The premiere cotton sarees and fabric in yardage are not restricted to a profession, but rather it’s a ‘court appropriate attire’ if I may bracket it so . Anyone who loves to wear sarees or wishes to acquire the yardage will find it a luxury product. A continuity line with the same aesthetics but in ‘colour’ variants are in the pipeline as we have been receiving demands on that front as well.

The writer Sujata Assomull is an IANSlife columnist. Assomull is the author “100 Iconic Bollywood Costumes” and was the Founding Editor In Chief of Harper’s Bazaar, India. (IANS)