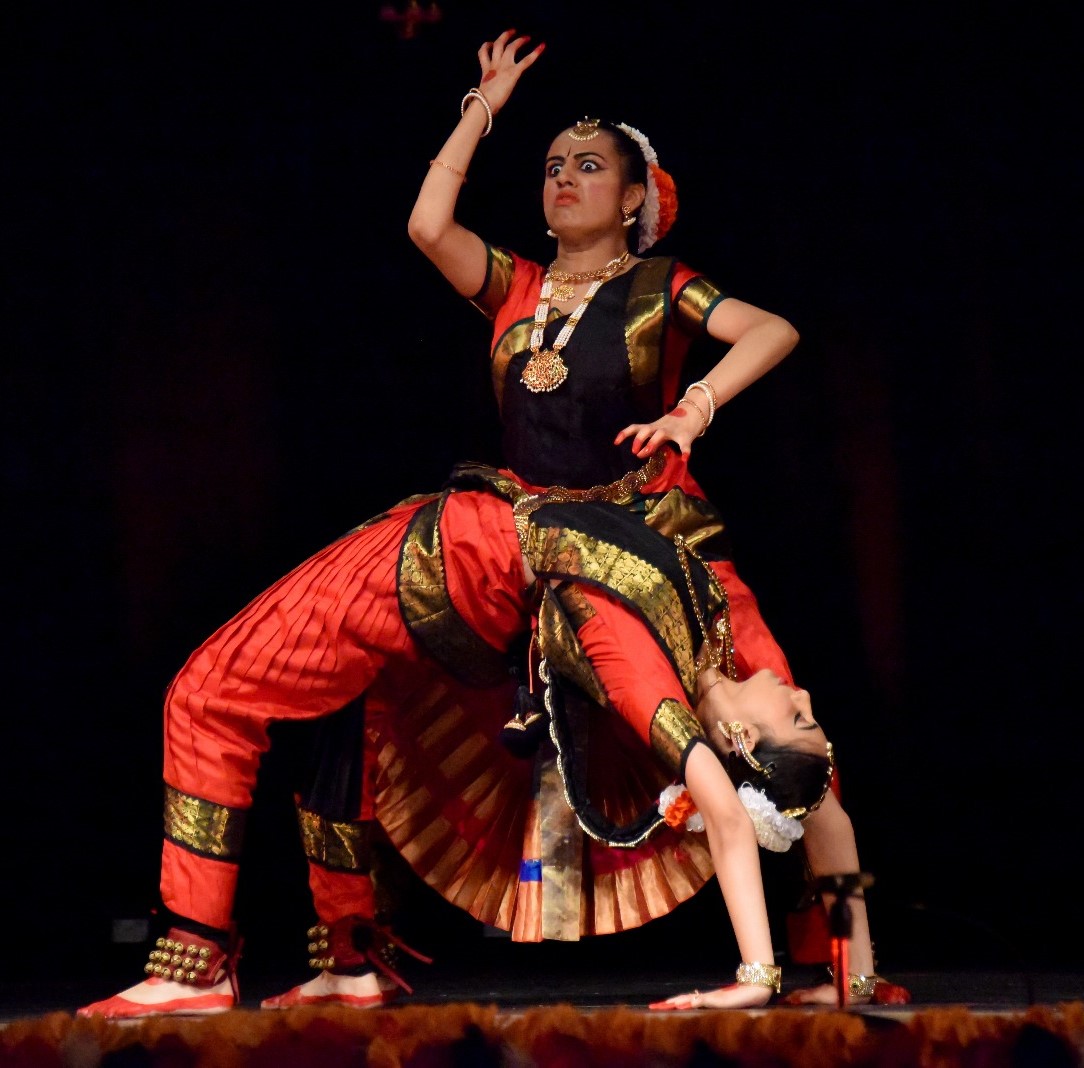 There is always something surprisingly unique watching two young dancers perform on one stage. In the New England area, we all have the opportunity to visit many Arangetrams each year. I still love to be surprised when I attend one. As someone who shared an Arangetram with another person, I love seeing how a duo presents their debut. Shared Arangetrams never disappoint the audience. For Nidhi Yabannavar and Jenika Patel’s Arangetram, the words “unique” and “picturesque” hold true. 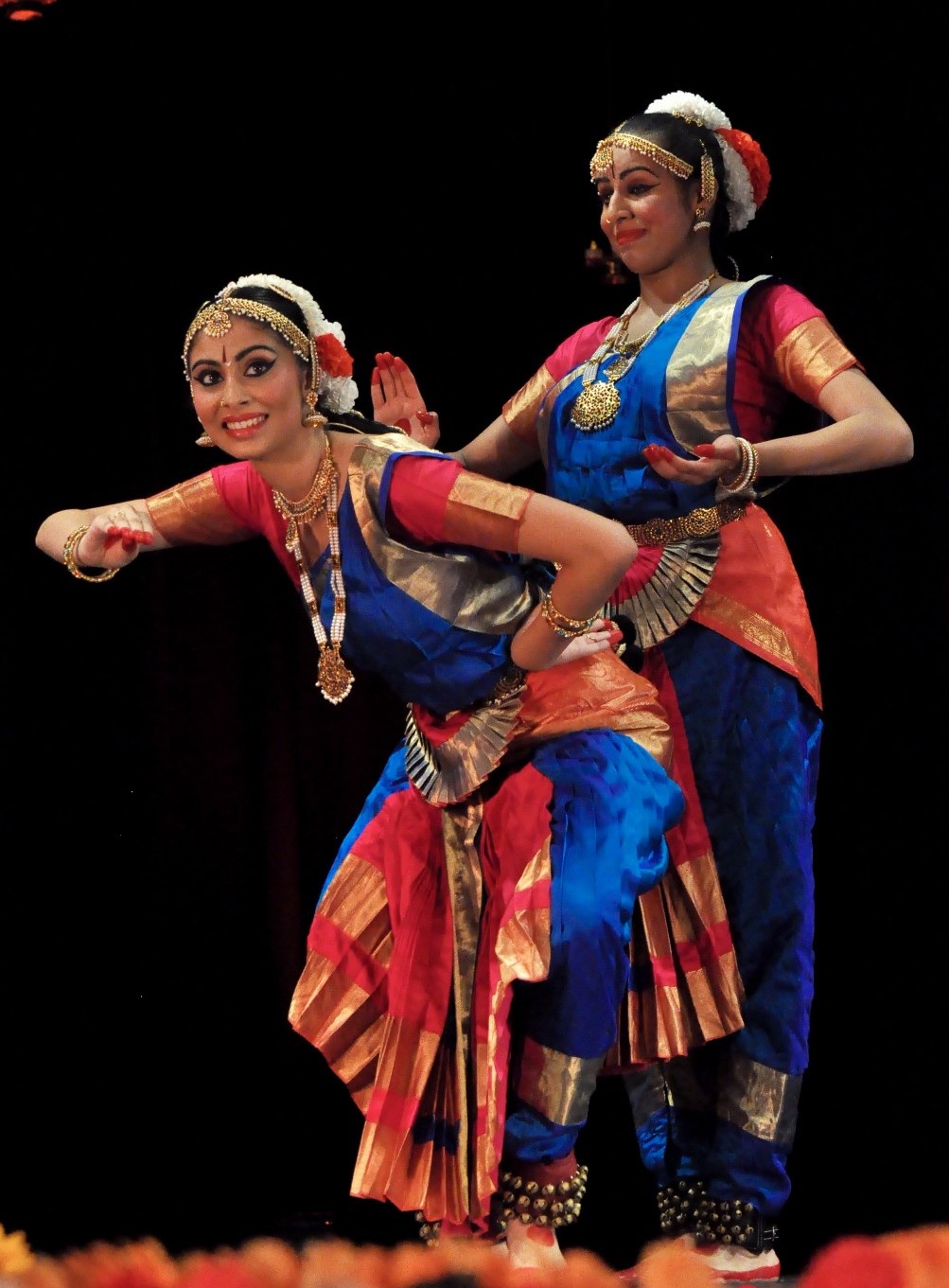 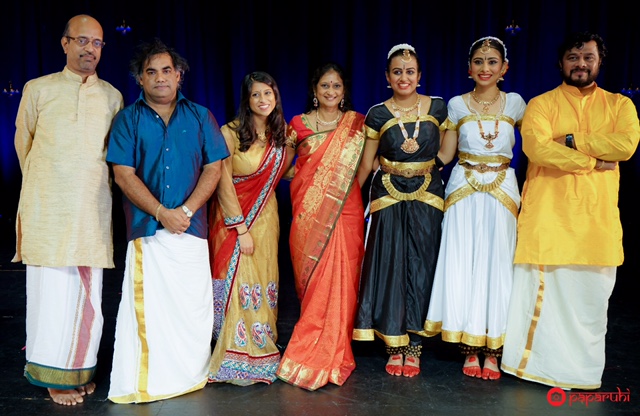 The Pushpanjali was the first dance, where Nidhi and Jenika offered flowers to the stage and took the blessings of God and the ensemble. The innovative choreography by Guru Poornima Risbud further enhanced the energetic dancers as they first appeared on stage. The Pushpanjali was immediately followed by “Gajavadana Beduve…”, where Jenika and Nidhi both prayed to Lord Ganesha – the remover of all obstacles and protector of the three worlds. Alarippu, in misra chapu talam, was next in the repertoire, where Nidhi and Jenika danced in different formations to keep the audience on their toes.

One of my favorite dances, Swara Shloka, was next. This was a unique song selection, where the dancers first performed a jathi (a series of rigorous footwork) and then prayed to a Hindu Gods/Goddesses. Nidhi and Jenika’s bhavam (emotion) was the highlight of the piece, as they praised Ganapathi, Muruga, Parvathi, and Shiva. Throughout the dance, the dancers acted in different roles to portray the meanings of each shlokam to the audience. 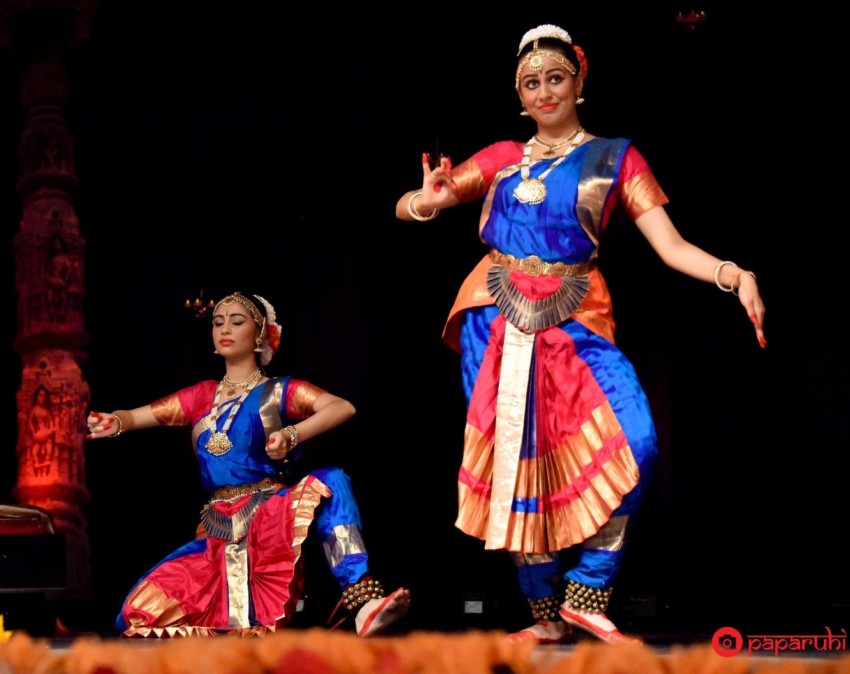 In a Bharatanatyam Arangetram, the varnam is the toughest and longest dance that tests both the dancers and musicians’ stamina and abilities. Through this dance, which praised Lord Rama, the audience could see how much time Nidhi and Jenika spent to perfect this performance. The two girls memorably portrayed the stories of King Dasharatha, Ahalya, Rama and Sita’s marriage (a crowd favorite!) and the final battle between Rama and Ravana. From Nidhi’s characterization of an arrogant prince attempting to lift the bow to win Sita’s hand and her pleading face as Ahalya to Jenika’s evil expression when taking the role of Ravana kidnapping Sita and her heroic moment as Lord Rama in the end, the entire piece was choreographed and executed beautifully by the two girls.

After a short intermission, Nidhi and Jenika started their exciting second half with Sage Kanakadasa’s poem “Bagilanu Taredu…” which praised Lord Krishna. As a Bharatanatyam dancer with eight years of experience, I could see the amount of effort they put into this dance and its complexity. The girls’ expressions were incredible as Nidhi became the devoted Prahalada and Jenika transformed into the egotistic Hiranyakashipu and when the dancers portrayed the story of Lord Krishna saving Draupadi.

Jenika’s graceful solo performance following the poem was filled with bhavam towards Goddess Parvati in the form of Karunaswaroopini. “Bhavani Ashtakam” was a dance where Jenika shined on stage. Her bright eyes and smile highlighted her face and showed her devotion to the goddess. Nidhi’s solo dance, “Nudidare Muttina…” was a vachana by Basavanna that stressed the power of righteous speech. Nidhi’s energy, emotion, and jathis were all exemplary, and the audience loved the unique dance.

A Thillana is an intense ending to an Arangetram, composed to several jathis in the beginning followed by a lyrical portion dedicated to a God/Goddess. Jenika and Nidhi’s Thillana, in the Ragam Kadana Kuthuhala, had fast footwork and unique formations, and the girls were smiling throughout the piece. They ended it with a joyful tribute to Lord Krishna.

Before the last dance of the evening, the audience was entertained by the members of the orchestra. Sri. Ramani Thiagarajan, the flutist/kanjira player, and Sri. K.S. Sudhaman, the mridangist, performed a short jugalbandi. The audience was clapping along to Sri. Sudhaman’s beat on the drum and Sri. Thiagarajan’s skills on the khanjira. 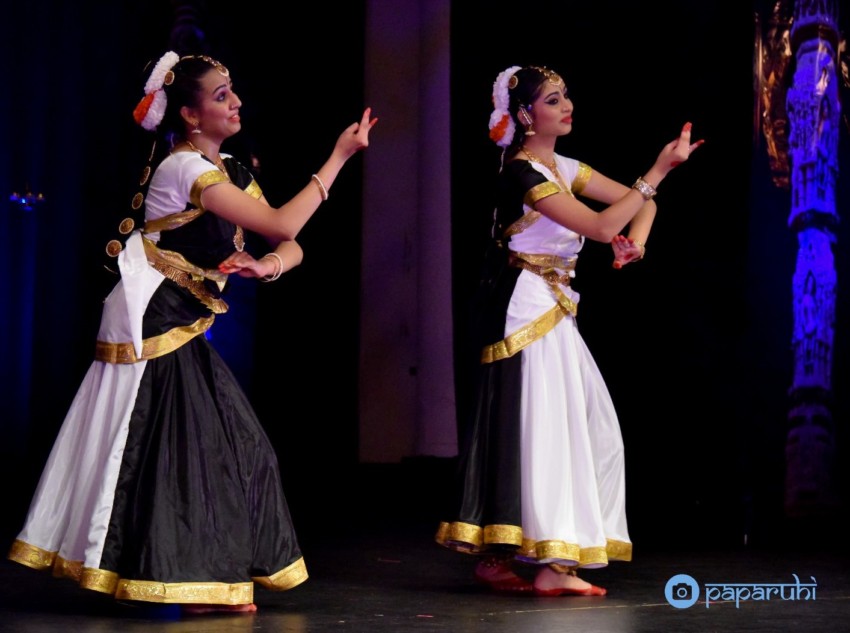 In a traditional Arangetram, the Mangalam is the concluding dance. However, the Guru, Smt. Poornima Risbud conceived a truly special, unconventional concluding piece, a contemporary dance based on Tchaikovsky’s “Swan Lake” where the Black Swan and White Swan learn from one another and dance together. The background music was a piece of a song composed by Pt. Ravi Shankar and the dance was choreographed by Shachi Risbud. This dance orchestrated a perfect ending for a fantastic Arangetram. Jenika played the graceful and innocent White Swan. Her movements were very light, and she had a dazzling smile on her face throughout the piece. Nidhi was the fierce Black Swan, and she jumped with strength and danced with a more serious aura. Even though they played contrasting characters, Nidhi and Jenika’s coordination was strikingly beautiful. Even better, Jenika’s costume helped signify her character of the White Swan because the front was white and the back was black. Nidhi’s costume was flipped; the black front and white back symbolized the Black Swan. The costumes were designed by the choreographer and were specially made in India. A short Mangalam was included in the end, where the dancers both offered their respect to God, the Guru and ensemble, and the audience.

Nidhi and Jenika’s Bharatanatyam was unlike many Arangetrams I have seen. Their energy and chemistry were unparalleled. They both took on the roles of a multitude of characters and enacted their emotional stories to the audience. That day, Jenika and Nidhi proved their dancing abilities as well as their determination and stamina. I wish both these talented dancers the very best, and I hope to see them dancing in the future.

(Sanjana Rao is a Bharatanatyam artist.)