By John A. Quelch

In the marketplace, Brand Trump is authentic. It stands for aspiration and success, but more the ostentatious and flashy success that appeals to the newly wealthy, the entrepreneur, the outsider. For these consumers, brand Trump clearly delivers; Trump hotels, and resorts average a 4.5 rating on TripAdvisor.

Brand Trump has been extended to other categories, from steaks, to education, to apparel. Not all of these ventures have succeeded. Few guests see the competencies of a good hotelier as relevant to designing distinctive quality suits. But, for a minority of consumers who embrace the Trump lifestyle, these other products can add brand value and, being produced by others under license, they deliver some extra profit to the Trump organization.

In fairness, many brands have hits and misses when they extend beyond their core franchise. Richard Branson, for example, has done very well with Virgin airlines but other Virgin ventures, such as Virgin Money and Virgin trains, have performed poorly. Branson, however, never set up a flight school!

Can a commercial brand become a political brand?

Is the commercial Trump brand extendable into the political arena?

Commercial marketing and political marketing differ in two fundamental ways. In the world of commerce, the consumer votes at the cash register every day and the marketer does not need a dominant share to succeed; targeting a minority of consumers with a distinctive product is often more profitable than an all-things-to-all-people approach. But, in the world of representative democracy, you have to be the market share leader, scoring at least a plurality of votes, only on one day every four years. Unlike a commercial brand, the political brand doesn’t need a close ongoing relationship with consumers, and it doesn’t need to coexist with competitors after the election. The political brand just needs to close the deal once–on voting day. 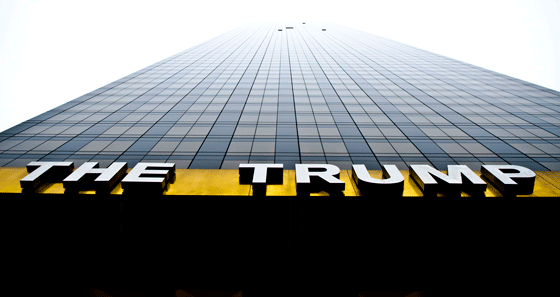 The Trump brand seemingly reaches to the clouds—but can it influence voters? Source: Jaconelli

The skills needed to win a party nomination are more akin to those of the commercial marketer. A distinctive appeal to a niche segment of the population is sufficient. Trump has become the presumptive GOP nominee with votes from only 6 percent of the eligible electorate. To win the general, assuming a 60 percent voter turnout, he’ll need around five times as many customers to close the deal.

Conventional political wisdom argues that Trump has to soften his tone, drop the ad hominem attacks, and moderate his views to put together a winning coalition. But even if such adjustments were psychologically possible, an abrupt change could be dismissed as inauthentic. Hispanics, Muslims and women already know what the Trump brand thinks of them and might see any corrections in tone or policy as pandering. At the same time, a softer tone might weaken the enthusiasm of Trump’s core supporters.

The other path is to keep on doing what’s worked so far: an appealing slogan, outrageous comments that eat up the oxygen in the daily news cycle, an emphasis on a few core issues. The marketing question is whether brand Trump can become more about the brand rather than be about Trump. A successful brand is owned by its consumers. It delivers benefits that speak to their needs and aspirations. If brand Trump can project convincing superiority on those issues like jobs and national security that voters view as the most important, the outrageous comments may be overlooked if not forgiven.

Clinton will doubtless try to pin Trump down on policy and expose his lack of detailed knowledge. Trump will try to stick to broad brush strokes, avoid policy specifics and leave enough white space for voters to paint in the details of a Trump presidency as they imagine it. On Election Day, Brand Trump will mean different things to different people but that doesn’t matter if he gets their votes.

Imagine you are looking at a box of Kellogg’s Sugar Frosted Flakes. Clinton would prefer you read the nutrition label and make an informed decision. Trump wants you to fall in love with Tony the Tiger and forget the product details. In 1984, Democrat candidate Walter Mondale famously questioned Gary Hart’s “new ideas” by asking: “Where’s the beef?” As it turned out, most of the electorate wasn’t much interested in policy beef, but more taken by Ronald Reagan’s vision of a shining city on a hill.

Superficially, Trump’s call to make America great again offers a similar aspiration. But, unlike Reagan’s vision, Trump’s appeal is more retrospective than prospective, divisive rather than inclusive. It works mostly for older white men who are no longer enjoying the inside track in a more equal society. The Trump campaign m.o. is reminiscent of the description of Ed King’s successful 1978 campaign against then Massachusetts Governor Michael Dukakis: “We put all the hate groups into one pot and let it boil.”

That brings us back to the messenger.

Anger attracts, but does it sell?

Clearly, Trump’s marketing has worked on some levels. Hillary Clinton has 3.5M Facebook fans. Bernie Sanders has 4.2M. Trump has 7.5M. The Twitter Presidential election has enabled outsider candidates to capture the attention of millions through social media sound bites. Pull-marketing targeting ordinary voters for small contributions is the hallmark of the Sanders campaign. Meanwhile, Clinton takes a more traditional push-marketing approach, securing endorsements from party officials and funds from big money donors. On the other side, Trump, already a media personality thanks to “The Apprentice,” has so far secured $4 billion worth of free media coverage and continues to dominate the news cycle with frequent controversial remarks.

Anger can grab attention but can’t buy you love. Is the Trump persona sufficiently likeable? Reagan could be tough and obstinate but he exuded avuncular warmth and wasn’t always looking to pick a fight. Mohammad Ali was a showman who called people names but he did so with a twinkle in his eye. It also helped that he was the greatest.

Brand Trump seems more petulant than personable. Absent political experience, party unity and policy specifics, personality is all that brand Trump offers, and it’s already wearing thin. Indeed, it’s looking ugly. Perhaps Jeb Bush will be vindicated in his prediction: “You can’t insult your way to the presidency.” Likewise, the world of commerce has never seen a brand insult its way to market share leadership.