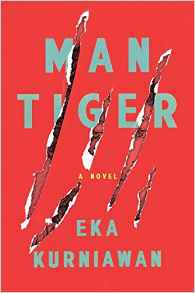 New Delhi– Study the aesthetics of a noted Malayalam filmmaker, delve into the fantastical world of a young man who conceals within himself a supernatural tiger, get dating tips from a geek and flick through the story of inseparable twins who see the invisible. This is what the IANS bookshelf offers its readers this weekend.

“Face-to-Face” is a critical introduction to the aesthetics of Indian film director, script writer and producer Moutatthu Gopalakrishnan Unnithan, commonly known as Adoor Gopalakrishnan. The book deals with Adoor’s cinema, his development as a filmmaker and his engagement with the culture, customs and history of Kerala.

It is also a primer on his films, interpreting each one thematically and stylistically. With unlimited access to the master, Parthajit Baruah’s well-researched narrative offers a fresh perspective on Adoor’s cinematic discourse.

A wry, affecting tale set in a small town on the Indonesian coast, “Man Tiger” is the the story of two tormented families and a young man who conceals within himself a supernatural female white tiger. The inequities and betrayals of family life coalesce around and torment this magical being. An explosive act of violence follows and its mysterious cause is unravelled as events progress towards a heartbreaking revelation.

Lyrical and bawdy, experimental and political, this extraordinary novel announces the arrival of a powerful new voice on the global literary stage.

You keep your action figures in their original packaging. Your closets are full of officially licensed Star Wars merchandise. You’re hooked on Elder Scrolls and Metal Gear, but now you’ve discovered an even bigger obsession — a girl who has just moved in down the hall.

What’s a geek to do? Take some tips from “The Geek’s Guide to Dating”. The hilarious primer is jampacked with cheat codes, walk-throughs and power-ups for navigating the perils and pitfalls of love life with ease. Geeks of all ages will find answers to the ultimate questions in their lives.

Full of whimsical illustrations, “The Geek’s Guide to Dating” will teach fanboys everywhere to love for long and to let it prosper.

Inseparable twins Aditi and Arjun look for music in the mundane. They are a part of a band that has a music video gone viral to their credit. But their mother worries for their sanity because they keep talking to a brother no one can see. Arjun and Aditi, meanwhile, have no idea how to credit the ‘ghostwriter’ of their lyrics, who wants nothing more than to come out of oblivion.