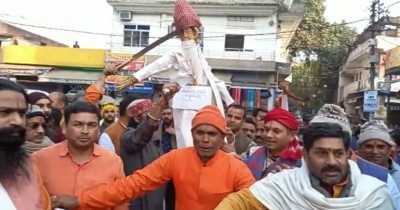 Patna– HAM leader and Bihar’s former Chief Minister Jitan Ram Manjhi’s “abusive remarks” on the Brahmin community have led to a row and now after the FIRs against him, the Pandas (priests) of his home district Gaya announced they will not perform rituals and “Pind-Daan” (offering to ancestors) after his death.

“Jitan Ram Manji is a native of Gaya district and the entire Brahmin community has given good support to him. Still, he has not only abused the Brahmin community but also the entire Sanatan Dharma. Hence, when he would die, Pandas would not go to his house for his shradh or Pind-Daan,” said Prem Nath Teyya, the leader of the Panda community of Gaya.

A large number of Pandas assembled at the city’s Vishnupad temple on Monday to participated in a protest march. They have also burnt him in effigy.

“Jitan Ram Manjhi has given disgraceful statements against the Brahmin community to do cheap politics. He has deeply hurt the sentiments of Brahmins. It cannot be tolerated,” Teyya said.

Gaya is famous for Pind-Daan and people from across the country come here to perform the ritual after their family members die. It is the only place where Pind-Daan takes place in the country and hence this place has great importance under Hindu tradition and culture.

As per Ramayana, Lord Rama along with Sita and younger brother Laxmana went to the bank of Falgu river to offer Pind-Daan to his father Dashrath. Since then the tradition has continued, as per the claims of the Pandas of Gaya.

Manjhi, while addressing the people of Mushar community during an event in Patna on December 19, said that when he was young, the prevalence of Satyanaraya Puja (Worshiping Lord Vishnu) was not much in their community.

“These days, the prevalence of Satyanarayan Puja is taking place in almost every house in our community. More alarmingly, the Brahmins come to our house, conduct Puja but they do not eat food in our houses. They shamelessly demand money (Dakshina) instead of eating food in our houses,” he said.

Mushars come under the Maha Dalit community in Bihar. (IANS)