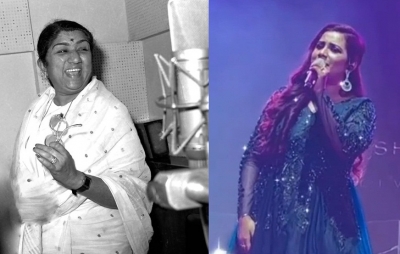 June 21, the International Yoga Day, was also the World Music Day, a fact few would have been aware of.

Music knows no language and, over the centuries, sounds from all over the world have gradually merged to create new vibes. Musicians have adopted musical instruments from other parts and, in the process of making music, often devised their own, new instruments.

The world over, music denotes melody as far as the lovers of music are concerned. There are intermittent trends, but these are seasonal and do not last for long. Take rap music, for example. Except for showing up as an occasional fad, it never caught on in India.

Indian music is rich and has been carried forward by the proponents of Hindustani classical music for centuries. The gharana system ensured that classical music was passed on from one generation to the next.

Indian classical music has a definite class of a discerning audience, but what many may not have known, even our film music, what we call popular music, is based on the classical ragas. At least, till not very long ago, that is the way it used to be. I don’t know how many composers today have the knowledge of the ragas and compose their songs around them. You hear more cacophony than melody now.

New music has few takers and you never hear it around you or on car stereos, yet, surprisingly, you see some very mediocre songs getting millions of hits on online music portals! You check any television show such as ‘Antakshari’ or ‘India’s Got Talent’, and so on, the participants invariably choose old songs to sing. Even in musical talent programmes for children, you see them croon songs dating back to 50 years (or even more) before they were born!

Talking of old songs, the hottest-selling music comes on the pre-recorded music device, Carvaan, from Saregama India Limited, the oldest music company (erstwhile HMV and Gramco) operating in India. The company enjoyed a solo run through the golden period of Indian music, film as well as non-film.

It was the film music, the original soundtrack of a movie, which was the real money-spinner, from the era of 10-12 songs to a movie till later, when a film would normally have about six songs. As things happened in those days, the music composer scored all the hit melodies and these continue to be played till date.

A few other music companies followed, the most prominent among those being Polydor India Limited, a company owned by the Filmcenter family. Filmcenter was the film lab that processed almost 90 per cent of the Hindi films made by the Mumbai industry.

With this kind of clout, not surprisingly, Filmcenter gave Saregama serious competition as quite a few filmmakers shifted their loyalty to this new company (earlier, they had no alternative!). Polydor, later known as Music India (still later, merged with Universal Music), and the other companies which had sprung up in the country, all closed down in time.

All along, the music industry worked on the royalty system. You handed over your music tracks to the music company, which cut the record and marketed it (compact cassettes followed much later). In return, the company undertook to pay royalty against the music albums sold. This was a tricky issue, for nobody knew about these royalty payments.

The filmmaker was happy if his music was a hit and played on the most popular countdown show in those days, ‘Binaca Geet Mala’, broadcast on Radio Ceylon every Wednesday.

The other issue that raises questions is, for how long are the music rights assigned to a music company? Because, all rights such as film distribution, overseas rights, and, later, telecast rights, are assigned for a time — and not perpetually. They revert back to the copyright holder.

Is that the case also with music rights? As recently as on June 9, the High Court of Gujarat, sitting in Ahmedabad, has delivered a judgment on a copyright case. It ruled that the copyright belongs to the author of a work in his lifetime and continues to be so till 60 years after his death.

This was till the entry of Gulshan Kumar and his T Series music company. Gulshan Kumar realized that the producers were not happy with royalties they saw little of. He came up with an outright music rights buying system with a lump sum amount. The rights would be his forever and there would be no accounting of royalty, real or concocted.

Long Playing (LP) records and cassettes, originally produced and marketed by the music companies holding the rights, were expensive (Rs 35 or thereabouts), though the basic record players and cassette players were getting cheaper. This situation gave birth to music piracy.

Copying an LP on a master tape was simple. And from a master tape, thousands of cassettes could be produced. They flooded the market. A cassette sold by the music company was copied and sold in the pirated market for as little as Rs 10 or Rs 12. Ironically, these pirates minted money and used it to fund their entry into the legit music market. Almost all major labels of the 1980s were pirates turned legit.

With almost all the music rights belonging to just one company, nobody knew for certain who owned the copyrights in a certain musical work. In those days, royalty from the music companies, plus whatever little All India Radio paid per song played, was the only source of revenue.

But with new technologies and avenues opening up, the filmmakers got concerned about royalties. Also, an issue was raised as to who all should get the royalty from a particular musical work. The singers, the music composers and the lyric writers wanted their shares. There was no control of any kind and music, especially film music, was used and misused by all and sundry.

Great classic melodies were ruined by people indulging in what was passed off as remixes. This was and still is the worst thing to happen to music and amounts to living off another person’s work.

This past June 21, the Copyright (Amendment) Act completed 10 years. The earlier Copyright Act came into force in 1957 and had a lot of loopholes. It allowed adaptations of original songs, for instance.

The best melodies were with Saregama, so the new, smaller companies reproduced these songs with emerging singers. They were sold at every nook and corner of the country. Of course, the makers of such music required no permission from the original rights holders, but had to, at least, inform them. Just a formal letter sufficed. The royalty payable was negligible.

The ownership of the copyright was vested only in the person who paid the people concerned with creating the said work. The creators were not entitled to anything besides what was paid to create the product. The Amended Act of 2012 talks about sharing of the revenue to protect the rights of the owner as well as the author, thereby also catering to the interests of the creator of the musical work.

There are three prominent bodies to look after the interests of music owners — the Indian Performing Rights Society (IPRS), Novex and the Public Performance Rights (PPR). Music creators, however, are still not very happy. Yes, music continues to mint money, but are its rightful owners getting their dues? For instance, anybody who posts a popular song on YouTube becomes entitled to it.

A lot of wrongs do exist in the music rights arena, especially in music related to films, and these will be dealt with in detail in a forthcoming column. (IANS)