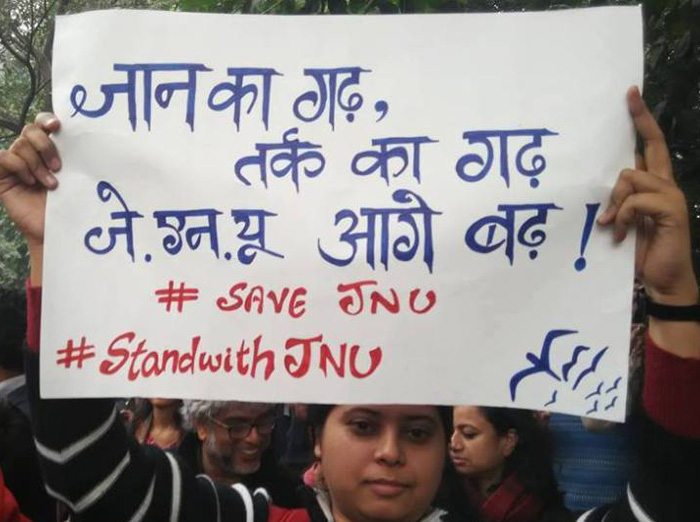 New Delhi–In the dead of a cold February night, they grew apprehensive, if not scary, and whispered in hushed tones that police may enter the moonlit campus of Jawaharlal Nehru University (JNU) that has become a new battleground of a right-to-speak-versus-nationalism debate in India.

There were minor disruptions but the student protesters largely stood ground and continued listening to their leaders making speeches, denying what they were fighting for is “anti-national” as alleged by police and right-wing Hindu activists.

The “revolution”, as many of the protesters called it, turned into the battle of ultimatums with police waiting outside the campus to be allowed in and the student leaders, facing arrest on charges of sedition, refusing to surrender.

“My name is Umar Khalid and I’m not a terrorist,” said the most wanted student leader who was among the five who surfaced in the campus after days of hiding. Four others who had disappeared were Anant Prakash Narayan, Ashutosh Kumar, Rama Naga and Anirban Bhattacharya,

One of their leaders, Kanhaiya Kumar, also accused of sedition, is already behind bars in Delhi.

“They fear us, they fear our struggles, they fear us because we think,” the 28-year-old PhD student said, reffering to the government and its saffron-allies.

As the crowd erupted in loud cheers, Khalid alleged that they were not being hunted down because of a controversial meeting on Kashmir they had organised on February 9. A doctored video clip showed him and other students shouting anti-national slogans in the event. They had not done that.

“The attack (on the university) is not because of the program which was organised on February 9, but because the government needs an excuse to attack us,” he said.

By this time, Delhi policemen in at least four vans had assembled outside the campus to arrest the “fugitives” in one of the premium educational institutions in India which has long been known to be a Left bastion.

But a couple of guards at the main gate of the campus towards dingy Munirka neighborhood stopped them and said they wanted to talk to university authorities before allowing them in.

“They came and wanted to enter the campus. But we spoke with the authorities who didn’t allow them to enter,” one of the guards told IANS.

Meanwhile, speeches continued as more students, who were sleeping, woke up to join the protesters. The numbers quickly turned into hundreds. “Roughly, 500 to 600,” one of the students estimated. “Perhaps more.”

The energy levels were high and so was the sloganeering even as the apprehensions about a possible police raid continued.

Somebody informed the crowd that the policemen have been denied entry and soon the crowd erupted loudly.

Though the speeches largely revolved around serious topic like liberty, equality and right to speak, there were burst-into-giggle moments as well.

The media also came in for some flak.

One of the speakers, mimicked some Indian TV anchors, “shouting, screaming, yelling on the top of their voices”, in their noisy news programmes.

Khalid also condemned the media trial that branded him as a terrorist.

“I have come to know so many things about myself that I myself did not know,” he said.

“I don’t have a passport, but I learnt (from the media) that I’ve been to Pakistan twice. I felt like laughing about how it would be when Jaish-e-Mohammed (terror group) comes to know that someone like me is being linked with them. Perhaps, they will protest in Jhandewalan against such a charge.”

As the night grew deeper, the crowd started thinning out. The protests ended around 2.30 a.m. But the protestors stayed around. Soon, the protests gave way to poetry and singing sessions.

They scattered in small groups around bonfires. Some were reciting Hindi, Urdu and English poems. Others were singing in hope of a “brighter morning awaiting the dark night”.

A few of them found shelters under staircases, corridors or even in the campus lawns to sleep. The policemen still outside, perhaps waiting for an order to enter.

A little past 6 a.m., as the glow filtered across the sky after a long night, many of them awoke to plan more protests for the day.

The brighter morning they were hoping for had not yet dawned.