The Council of Governors announced includes Srini Ambati, Andy Gupta, Farida Kathawalla, Vikram Mahidhar, Nimit Nathwani and Sangita Thakore. They all have been champions of AIF and shall bring their expertise and passion to ensure success as AIF broadens its impact. The Council shall work closely with Nirmala Garimella, the newly appointed Head of Development and Suchitra Krishna, Chapter Coordinator on the next phase of growth.

“We are delighted to announce that Santhana Krishnan has graciously accepted to lead AIF’s newly formed Governor’s Council for the New England Chapter.” said Raj Sharma, AIF Board of Director and the Founding Trustee of AIF New England. “Under his guidance and leadership, I am sure AIF will scale new heights in outreach and donor development. The Council is charged with running the chapter and organizing cultivation and fundraising events through out the year. Our goal is to attract supporters from the Indian diaspora as well as individuals who are passionate about India’s social and economic progress.”\

“As part of AIF’s strategy to enhance its reach in support of its mission, we have been focusing and investing significantly in strengthening AIF leadership across the board. I can’t think of a better person than Santhana to lead this phase of our development in New England.” said Dr. Venkat Srinivasan, Vice Chair, AIF.

“I look forward to working with the Council of Governors and the Trustees as we continue to drive social and economic change in India by building awareness and broader support base in New England ” said Mr. Santhana Krishnan. “Over the years I’ve seen AIF’s programs scale and make meaningful impact to over 2.5 million lives of India’s underprivileged. The Indian diaspora and individuals with India interests are donating more than ever before to support broad-based social change aimed at reducing India’s inequalities. I see a tremendous opportunity to build awareness of AIF’s broad social mission and evidence of impact to the prospective donors in New England.”

Krishnan along with the Council of Governors shall work with AIF New England Trustees Brian and Sunita Pereira, Raj and Nalini Sharma, Venkat and Pratima Srinivasan, Vivek and Vandana Sharma as they serve as ex-officio Council members.

Krishnan is currently the Managing Partner of Om Ventures and Founder of Asian Art Gallery.

Previously, Krishnan founded InteQ and led from its inception to its position as an industry leader in managed services (acquired by CSS) and SaaS service management (acquired by CA). Upon acquisition by CA Technologies, he was responsible for strategy, M&A and business development of a $300 million+ portfolio.

Krishnan holds MS degrees from Bentley University and Kansas State University. He earned his BS in Mechanical Engineering from the University of Kerala in India. He lives in the suburbs of Boston with his wife Namita and two daughters.

The Council of Governors for AIF New England

Srini Ambati has been volunteering with AIF since it’s inception in Boston, providing his expertise in the areas of Program Management and Audio/Visual for every gala from the past ten years. He is passionate about the causes that AIF supports and is very empathetic and compassionate towards the downtrodden since his childhood. He was also leading the philanthropic wing of the New England Kannada Koota and raised awareness and money to support various causes both in India as well as Boston. He also led several teams to provide physical services such as the Soup Kitchen, Cradles to Crayons, and Community Harvest.

By profession, Srini is a Cloud Solution Architect at Microsoft helping customers to accelerate their transformation through Azure Cloud consumption. He loves to travel, play/teach chess, and spend time with family during his leisure. His personal philosophy is “Live gently. Love everyone. Leave things in a better state than before. Let go of things that are not meant for him. Lead happy life and celebrate it every day”.

Andy Gupta with his wife, Deepa, have a keen desire to make a difference to children and adults, who are trying to improve their lives but may not have the resources. AIF’s programs and community have been an incredible resource to make a difference. Andy is a hedge fund analyst at HITE Hedge, investing in the energy sector. Andy holds an A.B. Economics and Business from Lafayette College, PA and an MBA from Harvard Business School, Boston, MA.

Farida Kathawalla is a long-term supporter of the nonprofit community and philanthropy. Having lived all over the world with her family her interest in world cultures, women’s rights and global education became even more important. 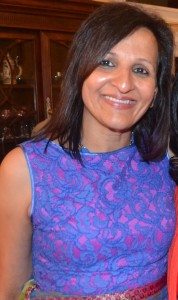 She started her nonprofit journey with World Boston, where she helped develop their international visitors program. She is on the advisory board at Primary Source and has chaired its 25th year celebration in 2014 and also has been instrumental in developing the global perspective dinner/lecture series. She also is the co-president of the global women’s circle at the United Nations of Boston where she has focused on women and girl issues through discussions, film screening and conversations and brought it to the local Boston community. Farida also is an active member with the New England International donors.
AIF was the right organization for her because it fit her need to give back to the country of her birth. She has been very active in the New England chapter since 2011 and currently she is part of council of governors.

Vikram Mahidhar currently heads the Cognitive Intelligence business at RAGE Frameworks. He is passionate about solving big business transformation problems using artificial intelligence technologies. Prior to RAGE, Vikram held leadership positions at management consulting firms, Deloitte and Accenture. He has advised senior management at several Fortune 500 companies. Vikram lives in Lexington, MA with his wife, son and a daughter. He is committed to making the world a better place to live.

Vikram earned a Masters of Science degree in systems design from Massachusetts Institute of Technology. He also earned an MBA in finance from Boston University and a bachelor’s degree from University of Pune, India.​

Nimit Nathwani was born and raised in Gujarat, India. As a teenager, he witnessed the devastation caused by the Gujarat Earthquake in 2001. The aftermath of this earthquake led to the formation of AIF. This tragic event inspired him to help serve the marginalized sections of the society that barely has access to the basic necessities. He is passionate about causes in areas of education, environment and gender equity.

Nimit is Certified Public Accountant with Deloitte & Touche LLP. He earned MSc in Accountancy from University of Notre Dame and a bachelor’s degree from Emmanuel College.

Sangita Thakore is a stay-at-home mom of four children. She is a co-founder of Eccretive LLC, formed in 2009, which utilizes expertise in search engine optimization to develop and invest in internet-based businesses. Sangita previously worked at GlaxoSmithKline from 1991 to 2001 in marketing and business development.

Sangita and Nick live with their children in Wellesley, MA.

The American India Foundation is committed to disrupting poverty, catalyzing social and economic change in India, and building a lasting bridge between the United States and India through high-impact interventions in education, livelihoods, public health, and leadership development, with a particular emphasis on empowering girls and women to achieve gender equity. Working closely with local communities, AIF partners with NGOs to develop and test innovative solutions and with governments to create and scale sustainable impact. Founded in 2001 at the initiative of President Bill Clinton following a suggestion from Indian Prime Minister Vajpayee, AIF has impacted the lives of 2.5 million of India’s poor and aims to reach 5 million by 2018-2019. Learn more at www.AIF.org