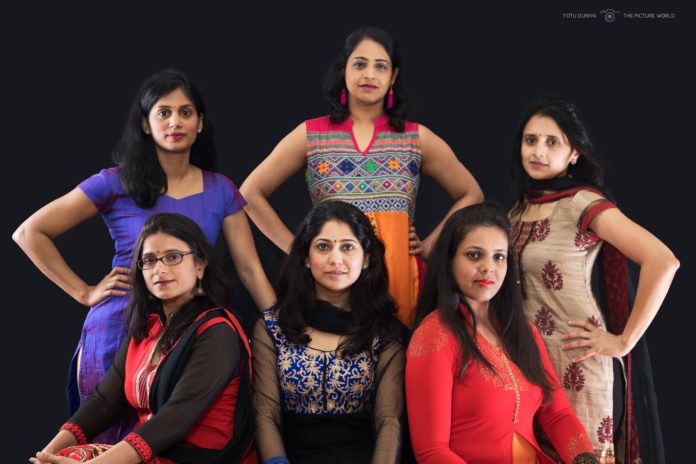 BURLINGTON, MA–Creating a choreography and performing at an event specifically meant to recognize and honor women for their extraordinary achievements is both straightforward and challenging.

Vasudha Kudrimoti has worked on multiple projects as a choreographer for the local theater groups and organizations such as SETU, Hindi Manch, IAGB, Prabasi, among others. Each time she strives to produce a choreography that is integrated with a story line.

After joining forces with Swasti Bhargava and forming the Jhoomar group, their choreography has become even more versatile. So when they heard about this opportunity from Manju Sheth, Vasudha and Swasti knew that they were going to present a piece that will showcase power, determination, grit, intelligence, beauty and strength. The challenge for them was in the song/music selection because the lyrics matter as much as the tempo of the music on which it is set.

This year’s performance is against the backdrop of trials and triumphs of warrior queens from India’s rich heritage.  The choreography uses a medley of three songs. The first two songs are from the movie Manikarnika – The Queen of Jhansi and the last one is from the movie Bajirao Mastani.

The first piece is a war cry – the dancers spring into a fierce battle and keep up the energy at the sky high level all through this segment exhibiting bravery and gallantry – a reflection of empowerment of today’s women who are no more afraid to take on bold risks. The tempo and rhythm changes radically into a smooth and elegant movements that showcases victory as the dancers lead into a choreography that blends classical dancing with contemporary style. Finally, the momentum is back up again with a piece that celebrates intelligence, beauty and charm that are akin to accessories that every woman cherishes to adorn and make it their own. 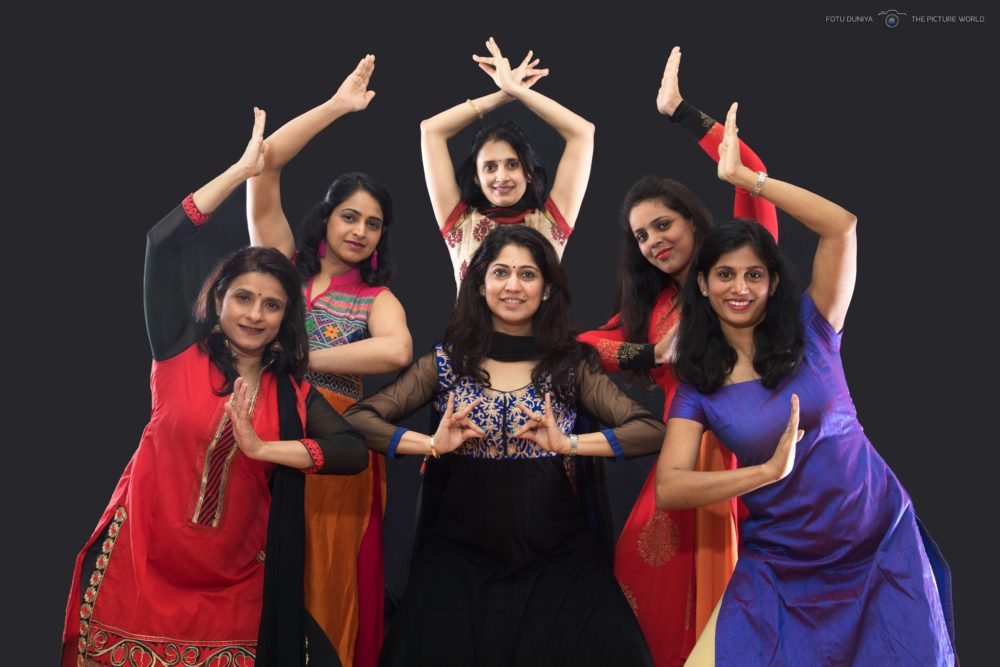 Even though the Jhoomar Group’s choreographers – Vasudha Kudrimoti and Swasti Bhargava came up with the theme, music, and the basic choreo – it was very much still a collaboration between all the six dancers – each of whom are gifted and talented with exemplary resumes. As a group they decided to adorn the ‘nauvari’ style of draping the saree – a style adorned by warrior queens depicted through out the choreography. Rakhee Wagal, another founder member of Jhoomar helped create the props that are integral to the choreo and add to the splendor of the characters as the dance evolves.

Here are the powerful performers:

Aditi Taylor: Aditi Taylor serves as the Chief Risk Officer for MFS Investment Management where she manages enterprise risk management. Over the last several years, Aditi has been recognized for many leadership accomplishments, including a recent award by India New England as the ‘Most Versatile Leader’ in 2017. She was also honored by the Greater Boston Chamber of Commerce’s ‘Ten Outstanding Young Leaders’ in 2015, Boston Business Journal’s ‘Leaders in Diversity’ in 2014 and inducted in Boston Business Journal’s class of ‘40 Under 40’ Leaders to watch for. She is currently the President of India Association of Greater Boston (IAGB). She also previously served as the President of the New England Marathi Mandal (NEMM). A mother of two boys, 14 and 9, she lives with her husband Vishal in Westford, MA.

Nishtha Saxena: Nishtha worked in the Travel and Tourism Industry back in India before immigrating to USA. and is currently pursuing opportunities in a similar career. She currently moonlights as Bollyx instructor. She like Vasudha is a regular on all SETU productions and is one of the co founders of the Jhoomar Dance Group. Nishtha is a gym freak and is featured on her gym’s promotional materials. Nishtha is a new mom and lives with her husband Sandeep and their one year old daughter in South Easton, MA.

Susmitha Mallidi: Susmitha works as a Business Analyst professionally and like all others, dance is her passion. She learnt to dance Kuchipudi style from a very young age. She moved to Toronto, CA after her marriage. Susmitha has performed on multiple platforms including SETU, TAGO, IAGB, and Gurjar. She and Vasudha were members of a Group – Asthitva when they won the first prize in a dance competition. She lives with her two daughters and her husband Hari in Newton, MA.

Swasti Bhargava: Swasti is Telecommunication Engineer by training with a Masters in Information Management. Swasti is a Bollyx ( Bollywood Fitness) Trainer and Bollywood dance Instructor. She is the founder of Swasti’s School of Dance and also works part time at Fuller Meadow public school. Swasti has performed on multiple platforms including SETU, SAHELI, SEWA International, Hindi Manch, IAGB, Gurjar, Health & Fitness Expo. She is also one of the founder member of Jhoomar Group. She lives with her two kids, a son and a daughter, and her husband Anubhav in Middleton, MA.

Vaishali Gade: Vaishali works as a Finance professional in Technology Industry.  Vaishali has been actively involved with multiple New England organizations. She has served as Vice President of New Engalnd Marathi Mandal and is currently serving as Secretary on IAGB board. Before that for many years she was a teacher at Indian languages at the Sunday school -Shishubharti.  Like others in the group Dancing has been her life long passion – and a hobby that she would never want to give up. Vaishali loves choreographing dances and has choreographed and performed on a wide number of platforms. She lives in Burlington with her husband Rahul, and their two boys and a high energy dog.

Vasudha Kudrimoti: Vasudha currently works as Project Manager and a Systems Architect on FAA (Federal Aviation Authority) projects. She is a classically trained dancer and immensely passionate choreographer. Vasudha has been involved in various dance projects not just as a dancer but as a key collaborator in each of those projects, more recently as part of the Jhoomar group . She has collaborated with Subrata Das (SETU), Preetesh Srivastav (Hindi Manch and Preetesh entertainment), Aditi Taylor (IAGB), Ishani Shah (Gurjar), Dhanashree Ramachandran (Mass Yoga) and of course Manju Sheth (WOY) among few others. Vasudha is mother of two wonderful boys and one of them himself is an amazing dancer and a choreographer. She lives with her family in Lynnfield, MA.