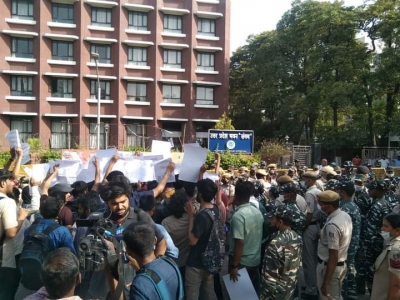 New Delhi– Several students and social activists were on Saturday detained while staging a protest outside the Uttar Pradesh Bhawan in the national capital demanding arrest of a Hindu seer, Bajrang Muni.

The protest was called by All India Students Association (AISA), Campus Front of India, and Fraternity Movement, after which students in large numbers along with activists assembled outside the Uttar Pradesh Bhawan at Sardar Patel Marg in Chanakyapuri.

“As the students continued to raise slogans outside the Uttar Pradesh Bhawan, they were stopped by the Delhi Police and later detained,” AISA general secretary Prasenjit Kumar told IANS.

The protesters were then taken to Mandir Marg Police station around 3.30 p.m. and later released at 7.15 p.m. in the evening, Kumar said.

On April 2, an alleged hate speech by Bajrang Muni outside a mosque in Uttar Pradesh’s Sitapur district went viral on social media, and later sparked an outrage.

Six days later — on April 8, the Sitapur police in Uttar Pradesh, in a statement on Twitter, said that a case under relevant sections has been registered and further steps are being taken on the basis of witnesses’ statements.

The 2-minute video containing the hate speech is said to have been recorded on April 2 when Bajrang Muni, who is the mahant of Maharshi Shri Lakshman Das Udasin Ashram in Khairabad town, was taking out a procession on the occasion of Navratri and Hindu New Year.

Muni can be allegedly heard saying in the video that if any Hindu girl is teased by a man belonging to a particular community, he would himself rape a woman of that community.

He also allegedly made some more objectionable remarks.

Sitapur district Additional Superintendent of Police, North, Rajiv Dikshit, had said that legal action will be taken as per rules on the basis of the facts and evidence that surface during the probe. (IANS)