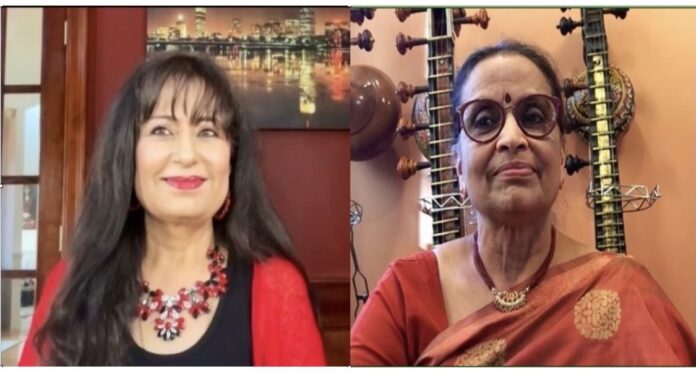 BOSTON– Veena and Carnatic music Durga Krishnan, who has taught Veena for about five decades, shares her journey and Lifetime Achievement Award on Chai with Manju.

In an exclusive video interview, she talks about how she started learning Veena when she was only nine year old, and how she learnt music from renowned musician Dr. Chitti Babu.

On June 3, she will receive the 2022 Lifetime Achievement Award at the 19th Annual Woman of the Year Awards gala at Burlington Marriott Hotel in Burlington, MA.

A graduate of Carnatic Music College of Chennai, with degrees including one as an advanced Teacher’s certificate, Ms. Krishnan is one of the primary disciples of the veena legend the late Dr. Chittibabu and has accompanied him on many albums and on stage.

Ms. Krishnan, who also received further training under the tutelage of the violin maestro the late Padmabhushan Lalgudi G. Jayaraman, has been living and teaching and performing in the Boston area since 1977 and has had many successful arangetrams. She also gives lecture demonstrations and workshops in well-known educational institutes including Harvard University, Boston University, Tufts, Berklee College of Music, Wellesley College and the Museum of Fine Arts in Boston.

In addition, Ms. Krishnan has composed and directed music for several stage productions by local Bharathanatyam teachers. Her video of her original composition “Two Faces of Rain” was played at the International Climate Conference in Glaxo, Scotland in 2021. She has also worked with well-known Jazz musicians and performed in fusion concerts.

Ms. Krishnan is an effective and sought-after teacher of veena and vocal music. Several of her students have won prizes in competitions run by CMANA and the Cleveland Thyagaraja Aradhana. She has composed and performed music for several dance productions for our local dance teachers and is a constant promoter of the Carnatic music in New England.

To buy a ticket for the 19th Annual Woman of the Year Gala, please click here.