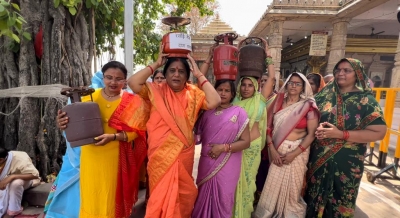 Bhopal–A group of women in Madhya Pradesh chose the occasion of Navaratri to express their annoyance towards the rising prices of LPG — Liquid Petroleum Gas, and rocketing prices of vegetables, pulses and milk.

In a video that surfaced on the social media on Saturday, a group of women could be seen performing ‘Garba’ dance with a ‘mini’ LPG cylinder on their head.

The incident has been reported from Madhya Pradesh’s Rewa district.

The women are associated with the Congress party, and they were protesting against rising prices of LPG and other commodities of daily usage.

They had come to a temple and had carried LPG cylinders to cook meals for ‘Kanya Bhojan.’

“We cooked meals for ‘Kanya Bhojan’ and fed 51 Kanyas (girl children). In the meantime, women were singing songs and chanting for Goddess Durga and performing dance also. Later, we decided to do a dance… and we did Garba dance with LPG cylinders,” said Kavita Pandey, a former councillor of Rewa municipal corporation.

Pandey told IANS that Garba with LPG cylinders was a part of their protest against rising prices of daily usage goods and items.

Notably, the Madhya Pradesh unit of the Congress on April 1 launched a week-long anti-inflation campaign in the state.

The protest was launched by state Congress chief Kamal Nath.

Nath had asked the party cadres to carry out anti-inflation campaigns across the state with beating of dholak (drum), and thalis (plates) and with sounds of ‘majeera’ (cymbal) songs, and dance. (IANS)