Mumbai– Ariah Agarwal has bagged a lead role in a web show. The actress will soon be seen in a rom-com series titled ‘Adi Suri Ki Dulhania’.

Ariah Agarwal made her debut with the show ‘Kya Haal, Mr Panchaal?’. She also worked in popular shows like ‘Kasautii Zindagii Kay’ and ‘Prem Bandhan’. Ariah now wants to do web series and films and she is already working on a few projects, and ‘Adi Suri Ki Dulhania’ will soon be out.

Speaking about her role in the series, Ariah says: “I play the character of a no-nonsense girl who is independent and straight forward. She is a professional photographer. The show is set in Delhi and Punjab. It’s a modern day rom-com, minus the cliches of a typical rom-com.”

Mumbai– Renowned music composer and singer Anu Malik will be seen as the special guest on ‘Zee Comedy Show’ this weekend. He will be sharing some interesting anecdotes on the show. 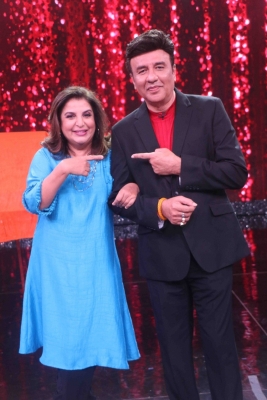 Responding to Sanket, the director and the music composer made some unexpected comments that left everyone stunned.

Farah Khan revealed: “Main Hoon Na’s music was so good that after the movie, I didn’t know how we both could top that. However, we have worked together on several reality shows, and we continue to share a great bond.”

Anu Malik, on the other hand, mentioned: “I really think Farah is a wonderful filmmaker and I respect her. If she took me for a film, she must have thought about it and after that, she took the decision of having me on board for composing the music of ‘Main Hoon Na’. When she decided not to take me for a movie, she must have thought about all aspects too. My love and respect for her will always be the same.”

The current track of the show highlights how ‘Khanderao’ has become an alcoholic and is caught in a state of intoxication by his wife ‘Ahilya’. Upon seeing him like that, she gets upset and vows to help him. Apparently, shooting for the sequence had a deep emotional impact on Gaurav for a couple of days.

Sharing more on the same, Gaurav said: “Essaying ‘Khanderao’s persona on screen can be challenging to pull off. It’s a complex character as there are a lot of emotional intricacies involved.”

“When we shot the first few inebriated sequences, it really emotionally affected me for a couple of days as even though the audience sees it as a 5-minute track in the episode, it takes 6-7 hours of shoot and 3-4 hours of prep. So, 10-12 hours of carrying very sensitive emotions on screen can really affect you,” he added.

Mumbai– Actress Taapsee Pannu has revealed that for her role in ‘Rashmi Rocket’, she had seen pictures and videos of a lot of Indian and international athletes’ body language before, after and while running.

Taapsee said: “Yes, I did a lot of research at my level for ‘Rashmi Rocket’, apart from what was going on at the scripting level. I had seen pictures and videos of a lot of athletes – Indian and international – to see the body language, before, after and while running, just to see their body types, because I had to take reference of athletes especially who are of my build and height.

Taapsee said she did that bit of the research.

“Of course, I have never seen my body in that kind of a shape, so you are in for a surprise when you are trying to get those muscles to pop out because you want to see how they look on you. I had no idea how they’ll end up looking on me, if I’ll look similar to those references that I had taken or no. So, it was a dive of trust that I did with my training and I am glad that it ended up looking very authentic.”