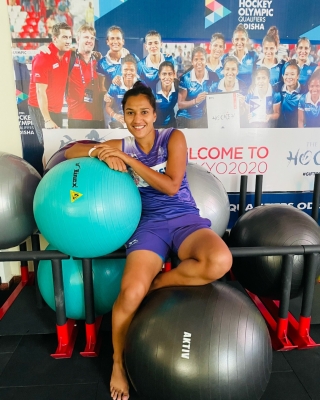 New Delhi– On a day when the Sports Ministry, the Indian Olympic Association (IOA) and the Sports Authority of India (SAI) marked 100 days to the Tokyo Olympics with special functions and online webinars, attended by the sports minister Kiren Rijiju, top athletes among others, the message was clear that India wanted to put its best foot forward at the quadrennial games.

Bhavani Devi, who recently became the first-ever Indian fencer to clinch an Olympic quota place, said, “It (100 days) was a very special occasion” and it would motivate her to put in her best effort into training ahead of the Games.

“For me, it was a dream to be like Mariel Leigh Zagunis, the two-time American Olympic champion in sabre. I started my Olympic dream because of her and now I am going to compete in the same Olympics with her in Tokyo. So, yes, it’s going to be a very special Olympics for me,” said Bhavani Devi.

“I’m sure we’ll all do our best at the Olympics and I’m excited and looking forward to joining my fellow Indian athletes at the Games,” added the 27-year-old fencer from Chennai.

On a day when, Hockey India launched a special programme, “Hockey Te Charcha”, a podcast series featuring icons of Indian hockey, the Indian women’s hockey team captain Rani Rampal said that even though “the Covid-19 pandemic wiped out much of last year’s action, the women’s team has been training hard at the SAI Centre in Bengaluru”, working overtime to improve their fitness and technique while being quarantined indoors for long periods.

“I am happy with the fight our team showed against Argentina and Germany earlier this year,” said Rani, adding, “Of course, we’re disappointed to have not registered a win, but we have showed that we could hold our own against higher-ranked opponents. Since coming back from Germany, we have been working hard on our finishing and our technique. We have come a long way from a tactical standpoint. I’m confident that once we convert these good performances into results, we will be in the mix for an Olympic medal too.”

For the first time in history, the Indian women’s team will be playing in back-to-back Olympic events.

Top Indian rifle shooter and the current national team coach, Suma Shirur, tweeted: “100 days to go for the pinnacle of world sports to commence its next edition. Nothing comes close to the emotions and focus during the final stretch leading up to the games. Best wishes to all athletes preparing for @Tokyo2020.”(IANS)