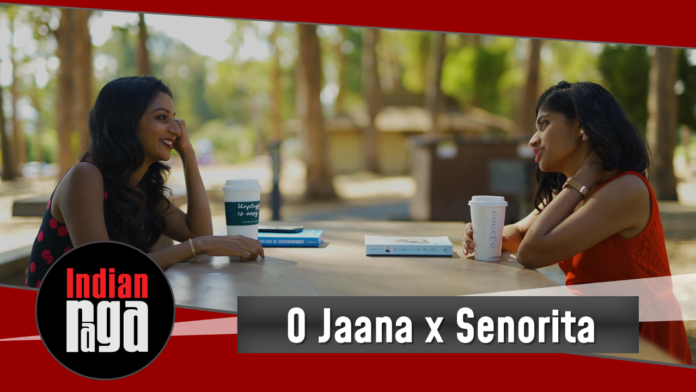 BOSTON—IndianRaga, which makes the classical arts cool and relevant to a young generation, will release its O Jaana x Senorita video on Feb. 13, revolving around the theme of love without conventions.

“In this modern-day and age, we have become accepting – of love in ways that are not standard and mundane,” Sruthi Dhulipala, an IndianRaga artist, told INDIA New England News via an email interview.

Playing the part of two women who fall in love through breezy playful moments, Ms. Dhulipala and Shruthi Iyer, are IndianRaga fellows who came up with an original Hindi composition to complement the ever so popular “Senorita” by Shawn Mendes and Camilla Cabello.

“The Hindi piece, “O Jaana” complements the romantic vibe of Senorita, with lyrics about moments in love, subtle glances that lead to two people falling for each other,” said Ms. Dhulipala. “Lyricist Sunayana Kachroo also scripted the perfect lyrics for the song in a couple of hours after we set a melody to the piece.”

The artists in the video are:

What were the adaptations and thought process behind creating this piece?

“For four artists who had never met before, creating an original composition was a challenge. We came up with the entire idea online – through WhatsApp,” said Ms. Dhulipala. “We sometimes joke around that we had an online music dating experience.”

She said the four artists were “matched” by their interests and skills, and thus started texting each other from different parts of the country.

“Finally, as we met in Boston for the fellowship weekend, we wrapped the piece into a tight bow and headed to recording and production. Our adaptation of Senorita started with a Spanish-flamenco vibe – i.e chords shifting from minor thirds to diminished,” said Ms. Dhulipala. “We would send each other random voice-notes through wee hours of the day and work on patching random tunes and beats into a complete song. Slowly building layers, we made the perfect piece to complement the original Senorita before we knew it.”

During one of their brainstorms, they realized that this song is a blossoming love story and would be a perfect tale for the lead vocalists to play two women in love.

“And so, we started building a narrative – of the lead roles meeting, instantly connecting with each other, feeling nervous around each other, and slowly starting to fall in love,” said Ms. Dhulipala. “As we started speaking about “unconventional love stories” we realized showing two women in love, especially the two lead singers in love, is depicting one variation of an unconventional love story, which is refreshing, and a story that must be told – as a component of the modern arts.”

IndianRaga, a performing arts community that provides a platform to talented artists all around the world to collaborate, perform, and create viral content, was founded to make the classical arts cool and relevant to a young generation globally.

“The average age of audiences for classical concerts today is very high, and the themes that classical arts traditionally deal with are outdated and quite different from what the youth today is dealing with,” says Ms. Dhulipala. “IndianRaga is championing the cause of relevant themes today incorporated into the grammar and vocabulary of performance in a meaningful way that bridges the old and the new seamlessly.”

“IndianRaga today is the largest network of the best talent in music and dance in North America and fast-growing globally,” said Ms. Dhulipala. “Iconic arts institutions and leading global corporate houses invite us regularly to present concerts, workshops, and lecture demonstrations to their audiences and employees.”

IndianRaga, which conducts workshops, certification programs, concerts and classes in India and abroad, helps the artists to develop specific skill sets through their programs. The Raga Labs program empowers artists to create full-fledged music productions under the guidance of an experienced mentor. The fellowship program, on the other hand, trains creative artists to meet over a weekend and independently master the audio and video production aspects of fun and unprecedented music projects.

Over the past 5 years, IndianRaga has connected over 3000 artists, ages 6 to 60, from 40 cities. They have collaborated to produce 400 masterpieces viewed by 10 million people across 65 cities, says Ms. Dhulipala.

Meet the founders of IndianRaga

Boston Fellowship Creative Director: Vinod Krishnan – Under the mentorship and detailed supervision of Sriram, and the creative director Vinod Krishnan, the Boston fellowship was a hub to creative projects in Indie fusion, Hindustani, Carnatic, Folk, and more.

Sriram Emani; Founder and CEO: Sriram Emani is the Founder and CEO of IndianRaga, which he founded when he was a student at MIT. He is a 2015 Global Fellow with the International Society for the Performing Arts (ISPA), where he was the only Indian out of 52 Fellows from across the world.

Under his leadership, IndianRaga has grown into one of the largest networks of talented musicians and dancers globally, invited to perform at iconic platforms like HowdyModi, United Nations General Assembly, among others.

Previously, Sriram worked as a Strategy Fellow with the President of Lincoln Center, New York City, and with the President of Global Digital Business at Sony Music, New York City. He also started the marketing and business development team at the National Center for the Performing Arts (NCPA) in Mumbai and was a Consultant to Disney Theatrical Group. Sriram is also an alumnus of the IIT Bombay, where he was the recipient of the institute’s highest honors for leadership and cultural excellence.