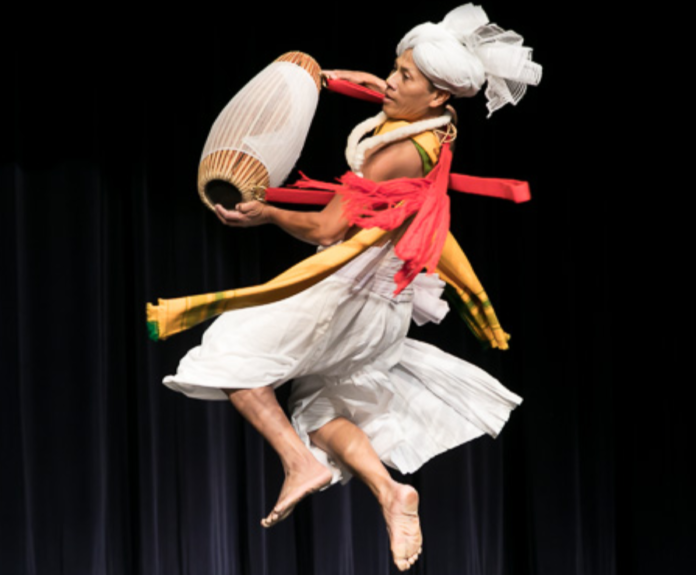 LEXINGTON, MA–TriNethra started five years ago with the purpose of highlighting the many varying dances all over India to inspire young dancers to leave the audience feeling the same way they felt at the TriNethra festival.

The second day of the festival this year in Lexington, MA showcased a series of more classical dance forms of Bharatanatyam and Manipuri. I myself have been to the festival for the past two years and often find that I am unable to take my eyes off the stage even momentarily. Three hours seems like a long time but once the performance starts, it goes by in the blink of an eye making you long for more at the end. As a student learning Bharatanatyam for the past eleven years, each piece I see on that stage makes me feel more and more inspired as well as connected to dance.

Manasa Jayanthi started learning dance from the age of five and a half under the counseling of Smt. Jothi Raghavan and has been taught by her for over two decades. She has been teaching at the Nrityanjali Dance Company for the past fifteen years and is a true idol for the next generation of Indian American dancers.

Manasa kicked off the second day of the TriNethra festival with three pieces highlighting the beauty and grace of Barathanatyam, a classical South Indian dance form. She began with a moving Pushpanjali, a dance that welcomes the lord of dance (Lord Nataraja) as well as the musicians and audience. This piece was in the Ragam Arabhi and Adi Thalam.  Her second piece was a Varnam, one of the most important and complex Bharatanatyam pieces, called Rama Neeve.

The Varnam praised Lord Rama, an avatar of Lord Vishnu, that was in Ragam Kharaharapriya and Adi Thalam. The music, by Tenmatam Narasimhachari, itself made me tap my feet in my seat but her expressions made me wish to run up on stage and dance with her. The interesting thing about this piece is that she in fact used of her guru’s guru’s, Rajaratinam Pillai.  Manasa’s final piece was a Javali, a piece often about an unfaithful hero or heroine with romantic themes, called Nee Maatale Mayanura. This piece was in Ragam Poorvikalyani, Caapu Thalam and was sung by Pattabhi Ramayya. In this piece, Manasa very accurately displayed expressions of anger at her lover as well as a sense of longing at the sound of his voice. 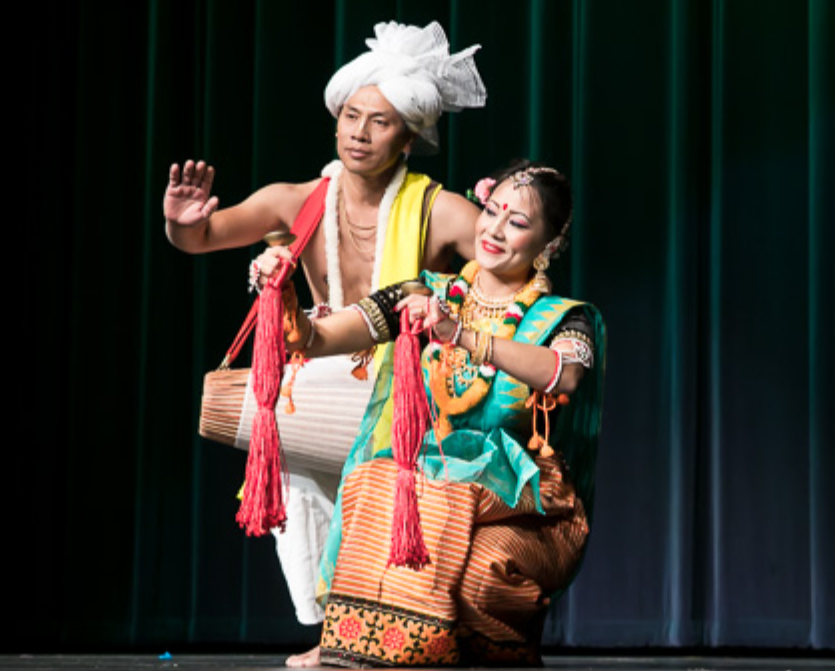 The second group performed Manipuri, a North Indian dance based in Manipur, consisting of Jagannath Lairenjam (a senior in Manipuri drum dancer who learned in Manipur from Shri Ng. Biramangal Singh)  Sanjib Bhattacharya (well known internationally who has received President’s Awards from Abdul Kalam and Pratibha Patil), Dr. Krishnakali Dasgupta (senior student of Smt Poushali Chatterjee of Kolkata and Dr. Sohini Ray of Los Angeles), and Jolly Lairenjam (learning Manipuri since childhood and performed in festivals in Bangladesh growing up, she continues to learn under Sanjib Bhattacharya’s guidance).

The Manipuri dance troupe performed many extensive pieces ranging from dance dramas, called Rasleela, to community prayer like celebrating Holi or Rathayatra, called Sankeertan to beautiful mixes of drum playing and dancing. The Manipuri dancers were so graceful that one could merely not take their eyes off of them while they gracefully performed on stage, calming the audience.

The final performance was done by Kalaimamani Rama Vaidyanathanan, a renowned Barathanatyam dancer who is well known all over India. Her dance career was decided long before she was born when after being star struck from one of Yamini’s performances, her pregnant mother had decided that if her child was a girl, her daughter would learn Bharatanatyam from Yamini. And with that Rama in fact did go on to learn from the legendary Yamini Krishnamurthy and the well known Guru Saroja Vaidyanathanan. 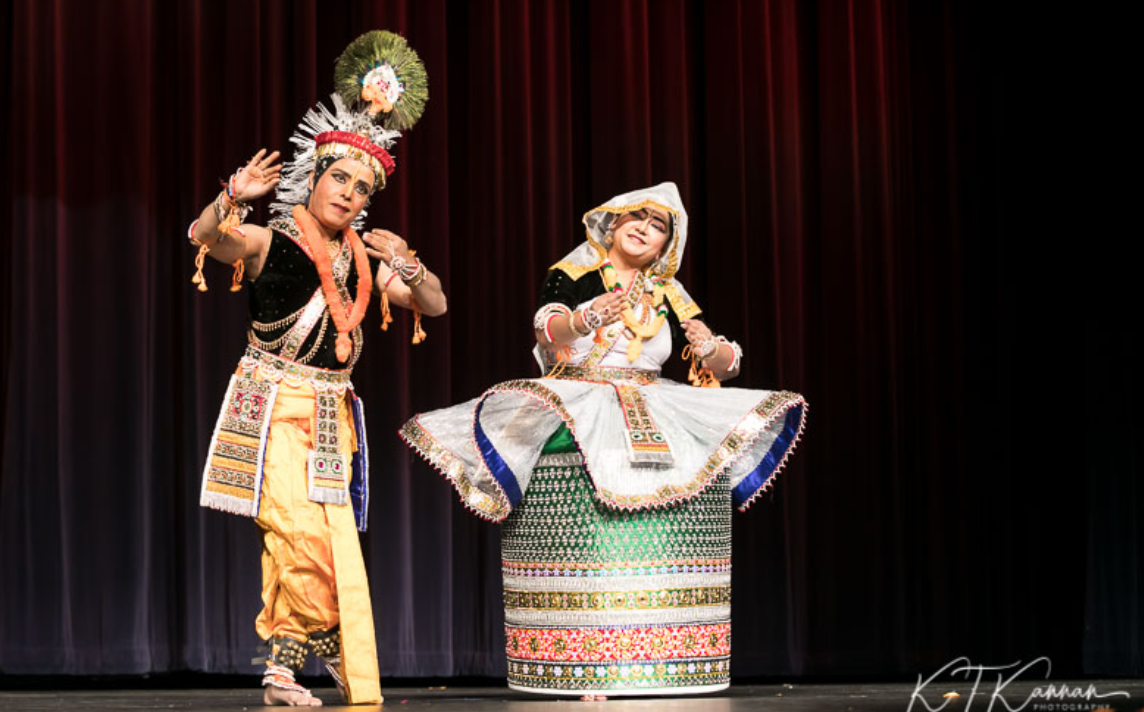 Her first piece was a Mayur Alarippu and her graceful imitation of a peacock was so accurate that even without knowing anything about dance, one could instantly point out she was showing the beauty of a peacock.  Her second piece was in Raagamalika, a piece composed of various ragas flowing from one to the next, called Jeevathashavasta.  Taking the teachings of Guru Nankji, one of the Guru’s from the Sikh religion, the 10 stages of yearning in the lifetime of a human, and described how an embryo, sick of the selfish stages of life ranging from yearning for attention to wanting to escape the grasp of death, refuses to be brought back into the selfish world again. This unique performance is something not often associated with Baharathanatyam, which normally portrays more religious values, and the unexpected twist left everyone starstruck the same way her mother was seeing Yamini all those years ago. Rama’s final piece was called Ras Leela.  Her unique dancing, vivid expressions, and strong dance form all bring a modern twist to this classical dance style leaving the audience in shock each and every time she takes to the stage.

As a student of dance, I have been to numerous performances, but never have I seen a single production showcasing numerous different dance forms. In general, most productions tend to display the highlights of their specific dance forms, but TriNethra makes sure to highlight the different dance forms from North India and South India, classical and nonclassical. This uniqueness of TriNethra prompts everyone to come back to watch every year and each show gives the audience a glimpse of the Indian Dance World continuing to leave the young dancers out there inspired and the entire audience in awe again and again.