LEXINGTON, MA–TriNethra: A Third Eye Festival of Dance had its 5th annual show last month. Held in the Scottish Rite Museum in Lexington, MA  each year, the show seeks to highlight theater and dance styles from all across India.

TriNethra: The Day-2 of the Third Eye Festival of Dance

The event is curated by Jayshree Bala Rajamani, a widely regarded Bharatnatyam performer and teacher in Massachusetts. The festival happens in partnership with the Monroe Center for the Arts and Lex Hills Capital and receives grants from the Massachusetts Cultural Council. The first day of TriNethra had Kathak, Kuchipudi, and Bharatnatyam with a new twist.

The show kicked off on a Friday with an important aspect of the festival: its young dancers series. Every year, Rajamani curates the festival to showcase new talent, inspiring young dancers by showing them what their craft could eventually look like. Personally, as a student of dance who has attended Trinethra for two years, seeing these formidable dancers has often inspired me to continue dancing and fall more in love with the craft. We don’t have to dance for 35 years to create beautiful performances (although it would probably help), so it’s heartwarming that Trinethra specifically highlights those perspectives.

The first young dancers of the festival were kathak dancers Maya Bhat, a senior at Shenendehowa High School in New York, and Sessi Adepalli, a junior at Northeastern University. Their guru, Urmi Samadar founded the Aakriti dance school and performed at Trinethra last year. Kathak is a North Indian classical dance characterized by quick, rhythmic feet movements accompanied by ghungroos, or small bells, repeated spins, and eye movements. The dance originated from traveling storytellers and like most classical dances, performances typically depict stories from Indian mythology with Hindustani music. 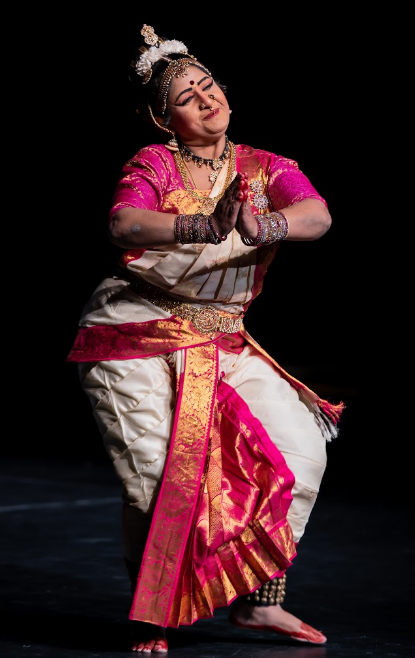 Their first performance was a teentaal, a 16 beat piece common in Kathak. Their sharp yet subtle movements added a gentle beauty to the dance. The second dance was a Gath Nikaas about monsoons. A Gath is a specific kind of walk and Gath Nikaas’s depict a certain character or idea in the way they walk. A special aspect of Kathak that isn’t true for other classical dances in India is an emphasis on improvisation. The third piece was a Shiva Tandav, a dance honoring Lord Shiva’s power and beauty. Sessi improvised the piece seamlessly, impressing the audience with both the dance’s sharp beauty and her ability to string moves together on the spot. The last performance, a Tatkaar depicting the sounds of water, wholeheartedly harnessed the dancers’ ghungroos to create an illusion of rainfall.

The next set of performances was by the PADAM dance school (Prafulla’s Academy of Dance and Music). Artistic Director and Founder Prafulla Velury was accompanied by dancers Krishna Sampada Velury and Pooja Thyvalappil. The group performed Kuchipudi, a dance form originating in Andhra Pradesh with roots in the Natya Shastra. Kuchipudi pieces are mainly accompanied by Carnatic music in Telugu and are characterized by detailed feet and hand movements, abhinaya, and depictions of mythology.

Krishna and Pooja kicked off the set by performing a Ganapati Pradhanam, expressing love and devotion towards Lord Ganesha. Their technical skills and dynamic supercharged their depicted emotions. Following the Pradhanam, they performed a lovely Jatiswaram in Athana Ragam and Adi Talam choreographed by Padma Bhushan Dr. Vempati Chinna Satyam. Prafulla followed their performance with “Namo Namo Maruthi,” depicting the story where Hanuman rejects a pearl necklace from Sita because it did not have Rama in it, eventually revealing that Rama lives within his heart. The sheer honesty of Hanuman’s character was well portrayed through earnest expressions and gestures. The final piece was a set of Praveshams, meant to signify certain characters entering the stage and Prafullla did a stellar job making sure their personalities imbued every aspect of the dance. The entries of Krishna and Mahishasura were self-choreographed, and the remaining, Narada, Rukmini, and Satyabhama, were choreographed by Dr.Vempati.

The final act of the performance was “Ragamala Paintings Alive!” an adventurous Bharatnatyam dance piece starring Jayshree Bala Rajamani to music composed by local jazz band Natraj. Jayshree founded the Bharathakalai School of Dance in 1987 continuing the legacy of her Guru, K.J. Govindarajan. She specialized in Abhinaya with Guru Jamuna Krishnan. Bharatnatyam is a classical dance originating from the state of Tamilnadu and is characterized by aramandi, abhinaya, and mudras. The band Natraj, led by Phil Scarff, seamlessly combines Indian classical music with West African traditional music and contemporary jazz to create a fusion style with distinctive, engaging rhythms. The band is composed of tabla player Jerry Leake, drummer Bertram Lehmann, violinist and violist Rohan Gregory, and bassist Mike Rivard.

“Ragamala Paintings Alive!” is a production inspired by the ancient Ragamala Paintings, which were paintings inspired by classical musical melodies, called ragas, across Northern India. The paintings depict scenes with varying themes, often with ragas, the male protagonists, and raginis, the female ones. Phil Scarff initiated the project of composing music from them and recruited Jayshree to contribute her interpretations, choreographic vision, and dancing. The composed music was stellar, adding an upbeat and engaging mood for the dances.

For me, the most striking aspect of the production was the act of combining the music and dance itself. Bharatnatyam is a disciplined dance; pieces are choreographed to the background of structured beats. Jazz music, on the other hand, is the complete opposite; it’s full of improvisation and adaptation and its beauty comes from the surprise and differences from each performance to the next. This variation requires the dancer to be able to adapt mid-step and on the snap of a finger, which Jayshree did spectacularly. As a student of dance, this break from the structure and meticulous nature of the craft while still maintaining technical and expressive excellence is even more awe-striking.

The performance captivated the audience with mixed media elements and included the use of images, light and shadow manipulation, and props. During the dances, the audience was able to interpret the paintings themselves from projections above the stage. I saw stories of antelopes dancing, a young Ragini preparing to get married, and kings hunting mighty beasts. Jayshree’s gestures and dance transported me right into the setting with her, whether it be a forest, lake, chariot, or palace. She depicted the youthful beauty of a Ragini waiting for her prince perfectly by playing with silhouettes behind a white sheet and using a mirror to simulate a vanity table. The production presented an adventurous combination of classical and traditional forms of music accompanied with dance.

TriNethra never fails to engage an audience and I can’t wait to see the talent curated for next year.

(Pranathi Srirangam will graduate from Lexington High School in 2020.)