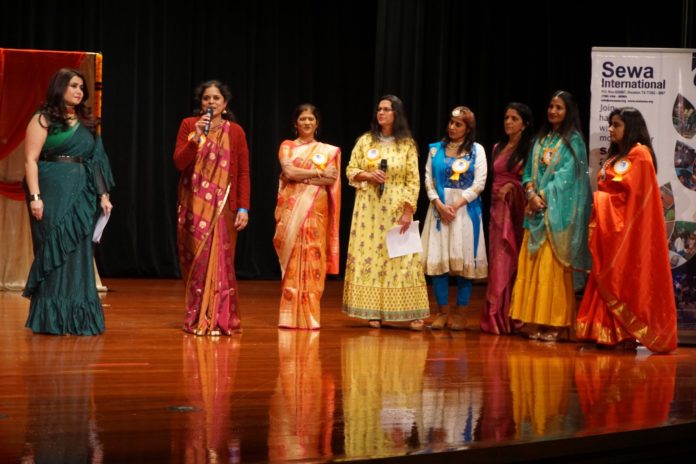 FRAMINGHAM, MA–Attended by more than 1,000 people from Massachusetts and neighboring states, the “Nrityameva Jayate 2019”, annual fund raiser organized by Sewa International, raised about $20,000 for its charitables causes.

The event was held at Keefe Technical School in Framingham, MA on November 17, 2019, which has continued to expand since its inception several years ago. The program received overwhelming support from the community. Funds raised will be used for service projects such as Feeding the hungry.

This year’s event was organized to promote volunteerism among the youth and create awakening among people to serve those in need. 400 students from 10 leading dance schools of the New England area made a financial contribution to Sewa International and participated in a dance competition with impeccable performances of Classical, Folk and Bollywood dance forms captivating the audience for six hours.

The program opened with a melodious rendition of invocation mantras by Ms. Smritha and ‘deep prajwallan’ (Light of lamp) by judges for the event. The emcee Ms. Yogita Miharia and Ms. Priti Shokeen welcomed the audience, participants, dance Gurus and distinguished Judges. The Emcees kept the audience engaged and appealed to them to generously donate to Sewa International for supporting various service projects.

The program was arranged in four age groups. Ten teams participated in the age group 6-9. Each one of these teams were a delight to watch. Sewa volunteer, Abhinav Mishra, talked about “Sponsor-a-

Child” program of Sewa. He explained to the audience, how the program works to benefit the underprivileged children in various parts of Bharat and encouraged the audience to come forward and donate for this cause. The program continued with the classical dance for age group 10-12 followed by age group 13-18. After this the winners of the age group 6-9 were announced by the Judges.

Following this, the folk category in the age group 13- 18 and Bollywood dance age group 10-12 and 13-18 were a real treat to the audience. In between, Ms. Geetanjali Virmani and Dr. Radhika Dixit, both long time Sewa volunteers, made an appeal to the audience to support various Sewa projects. Another local Sewa project “Feeding the hungry” was highlighted by sewa volunteer Dr. Pramod Pandey and a youth sewa volunteer, Arya Virmani. They both urged the audience to get involved and engage with this project by donating and volunteering at various meal centers where Sewa has been actively working for last several years. The “Diwali Food Drive” was also, mentioned and people were encouraged to donate non-perishable food, to be distributed at various food pantries in the New England area.

This was followed by high-octane dance performances by the adult age group which mesmerized the audience with their talent. The program ended with a vote of thanks by the emcee who expressed gratitude to every attendee and participant in the event for supporting the Sewa’s cause. She invited the audience to join the Sewa team and become an active part of this historic movement.

The audience and participants appreciated the efforts by all the Sewa volunteers to execute a flawless program. Some of them were heard saying “this is one of the best programs they have attended this year”.