ANDOVER, MA–Atharva Kasar and his friends in the group, Isha and Neha, raised funds for Sanmvedana, a school for children with Autism, located in Nagpur, India. Sixteen-year-old Atharva was also awarded graduation diploma from New England School of Music, where he has been learning India percussion instrument Tabla since he was six.

The program started with Saraswati Sholka sung by Neha Panke followed by the Emcee, Shubhada Kulkarni’s introduction of Atharva. After paying respect to Lord Ganesha and his teachers, he first set out to demonstrate his mastery of the technique by creating with ease and confidence the wonderful, intricate traditional patterns that every Tabla player must know. 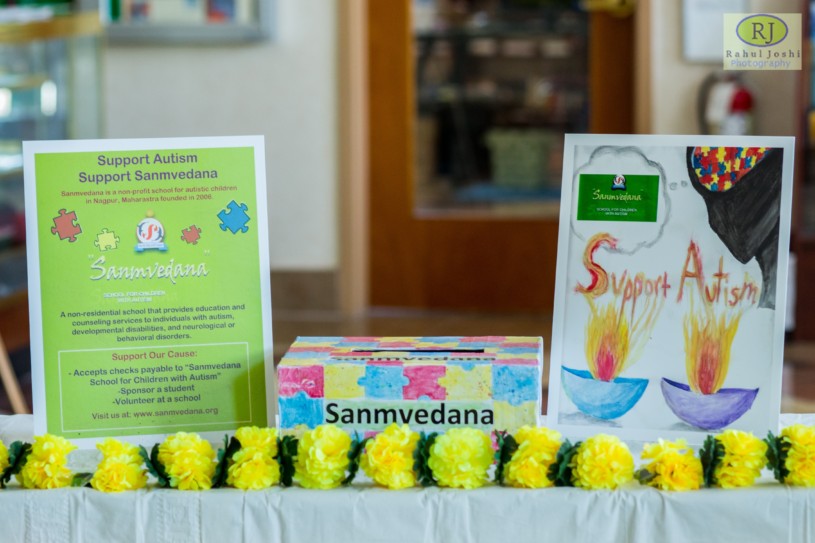 First, Atharva played Vilambit Peshkar. This means a presentation, and it is the first composition to be performed in solo Tabla performance. Following this came the Madhya Laya Kaida Rela. ‘Rela’ means ‘rush.’ In the final third of the solo performance came the Drut Gat Kaida Tukdas, which were small, repeated pieces of the larger composition known as Chakradhar.

Atharva demonstrated his mastery of Tabla by playing the Tabla at various speeds, and in varied rich patterns while clearly enjoying it.

Several instrumental and vocal artists from the New England region played a major part in the presentation that followed after the break during which Atharva demonstrated not only his mastery of the technique, but his deeper understanding and appreciation of the Indian classical music by accompanying them to present melodious music to the mesmerized audience.

During the second half, Atharva accompanied Mrs. Deepali Khanzode who played raag, Vrindavani Sarang on another Indian Classical instrument, Sitar. Next, Isha Khanzode, a rising high school senior at Winchester High School, played the sarod with Kasar’s tabla accompanying her, in the raag, Desh. The music was both soothing, inspired and the audience cheered as the artists created beautiful music using the traditional instruments of Sitar and Sarod.

Finally, the three vocalists stepped out on the stage: Ashwini Paranjape-Ranade, who has been trained in Hindustani classical since the age of 10; Sagar Tayde, a harmonium player and a vocalist who has also extensively studied Hindustani classical. Sagar had also participated in Sa Re Ga Ma Pa musical competition on Zee TV. Neha Panke, a rising sophomore at Burlington High School has studied Indian classical voice for the past five years.

Master of Ceremony Mrs. Shubhada Kulkarni was extremely graceful and managed to carry out her duties with remarkable ease, poise and knowledge not just of Atharva’s musical journey, but also of the classical art form.

The program concluded with vote of thanks from Atharva and his parents. He thanked all his gurus and all the artists on the stage. He also thanked his grandparents who flew from India to bless him.

Atharva is a rising Junior at Acton- Boxborough Regional High School, Acton MA. His parents introduced him to music at a very young age. At such a young age, Atharva is not only a budding musician, but also a leader in his school. At school, he participates in Speech and Debate along with his school’s Math and Science Olympiad teams, while also being on the Student Council. He is passionate about helping organizations supporting kids with Autism. He has also performed Tabla for autistic children at Samvedana during one of his summer vacations.

After seeing the effect that music therapy can have on many disabled kids, Atharva decided it was time to make a change by encouraging the use of music to help kids all around the world.  He and a few of his high school friends have been playing music at places like the Discovery Museums as well as C.A.S.E. Collaborative to make their impact in their area.  With an idea to help bring music to the kids, Atharva has founded a group “The Magic of Music” which is very close to his heart.

Atharva started taking Tabla lessons from Guru Aditya Kalyanpur and then continued with Guru Amit Kavthekar. Tabla has been used in North Indian classical and popular music in India for centuries.  Tabla is played on two drums using complex technique and fingers and palms of both hands to create distinctive bols and rhythms that can be enjoyed both on its own,, or as accompanied by other instruments such as Sarod and Sitar.  Ustad Allarakha Khan, Ustad Zakir Hussain Khan and other famous Tabla masters from India have made Tabla very popular among musicians and music lovers alike.

Atharva’s first Guru Aditya Ji is a Tabla maestro trained under the Late Ustad Allah Rakha, and Ustad Zakir Hussain.  He has recorded with international artists such as Grammy-nominated John Beasley, Grammy winner John Popper at the prestigious Carnegie Hall in NYC.

Atharva’s current guru, Amit Ji is a “GANDA-BANDH SHAGIRD” of Late Ustad Allah Rakha and then Ustad Zakir Hussain. He had accompanied maestros such as Pt. Jasraj, Pt. Buddhadev Dasgupta, or Ustad Shahid Parvez and Ustad Ashish Khan. Currently, he teaches Tabla at the New England School of Music based in Boston MA area.