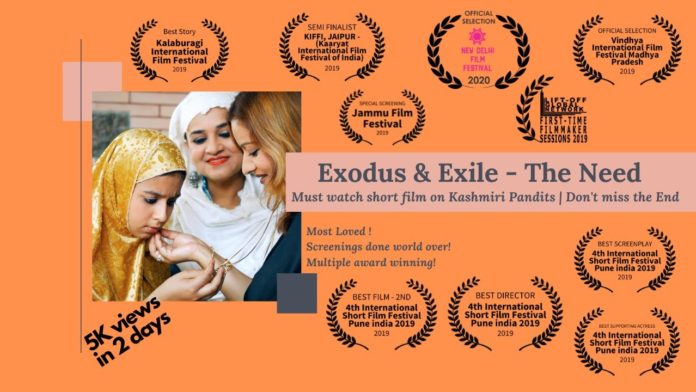 New Delhi– A short film on the plight of Kashmiri Pandits has been winning praise ever since it was posted on YouTube a while back.

“The Need: Exodus & Exile” is a 23-minute film that revolves around Kashmiri Pandits and how they were forced to leave their homes on being targeted by Islamist militant groups in the nineties. The film is succinct in the way it explores the dilemma of identity among the Kashmiri Pandits, owing to the community’s plight.

The movie, which is available on YouTube, features Kusum Tickoo, Sapna Soni and Jatinder Jotshi.

Lately, Bollywood has been showing a lot of interest in the subject of Kashmiri Pandits and the tragedy they suffered in the nineties.
Filmmaker Vidhu Vinod Chopra is coming up with “Shikara”, which is based on the Kashmiri Pandit exodus from the Valley in 1990. Vivek Agnihotri’s “The Kashmir Files” also addresses the same subject. (IANS)