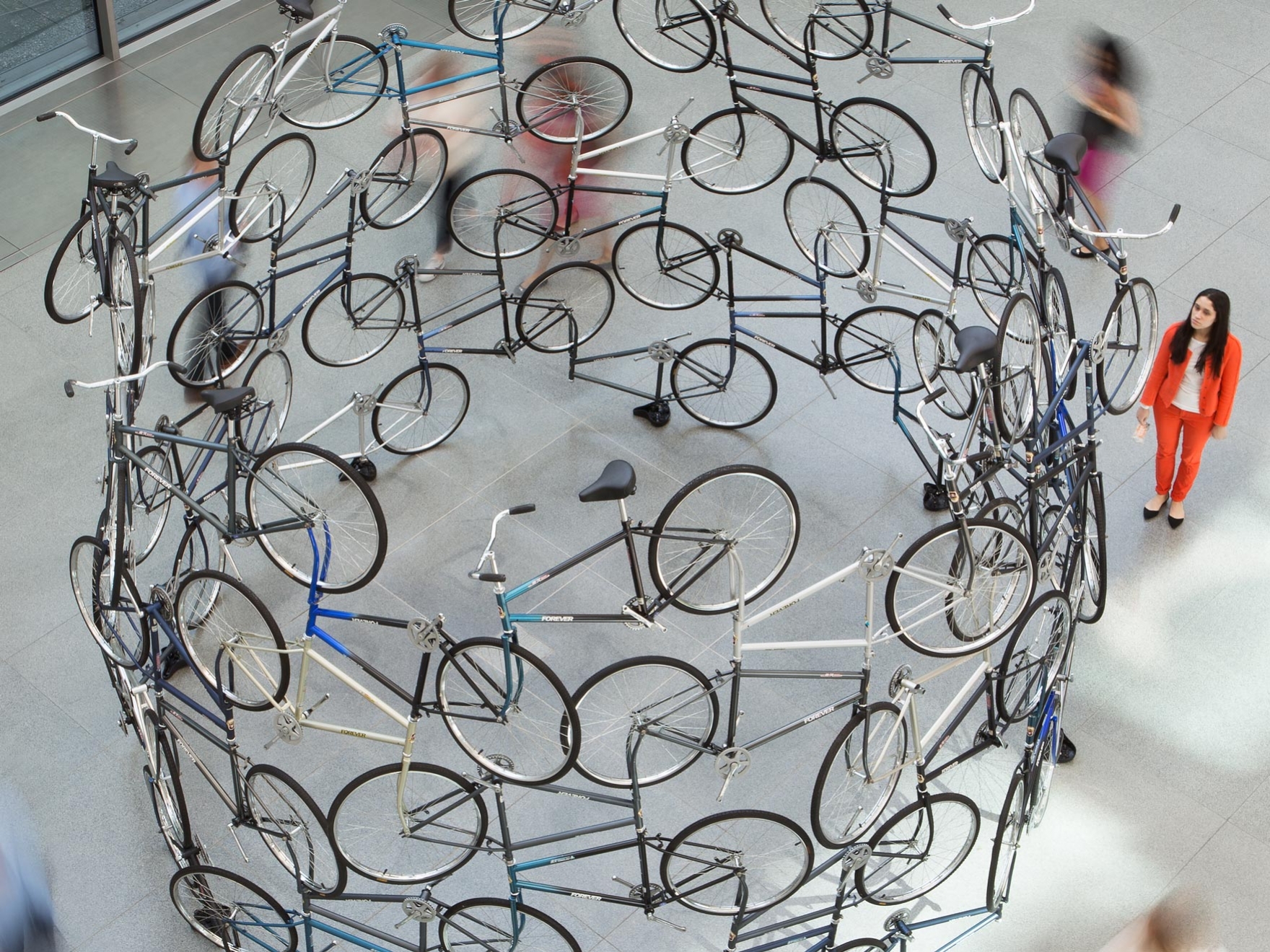 BOSTON–Husband-wife team of Nalini and Raj Sharma are sponsoring the Megacities exhibition at the Museum of Fine Arts in Boston this month. It is a dazzling display of Asia’s teeming cities including Mumbai and Delhi.

Monumental sculptures and installations represent the unique urban environments of Beijing, Shanghai, Mumbai, Delhi, and Seoul—Asian megacities with populations of 10 million or more.

The artists—some well-known, others emerging—respond to the unprecedented scale and pace of 21st-century South and East Asian urban life by gathering and arranging everyday objects, using the city itself as their medium, to create immersive physical experiences that evoke and respond to recent conditions in these Asian metropolises, according to organizers.

Their large-scale works appear in indoor and outdoor spaces throughout the Museum, reflecting critical issues, including rural-to-urban migration, consumption, construction, and pollution—while celebrating the vibrancy of today’s urban environment.

The exhibition is sponsored by Nalini and Raj Sharma. Mr. Sharma is Managing Director – Wealth Management and Private Wealth Advisor at The Sharma Group of the Merrill Lynch Private Banking and Investment Group.

Here are the details about the exhibition:

More on the exhibition from MFA:

“The accelerated rise of megacities—those with populations of more than ten million—over the last 50 years has profoundly affected the lives of their inhabitants. Asia is home to more megacities than any other continent: the works by the 11 artists in this exhibition respond to the political, environmental, and social conditions of their home cities of Beijing, Shanghai, Delhi, Mumbai, and Seoul, conveying their textures, proportions, and striking material and visual juxtapositions.

Like a sprawling megacity, this exhibition extends to all corners of the Museum. You’ll find works located throughout the galleries, and even outside the Museum’s Huntington Entrance, and at Faneuil Hall.

From the endless stream of migrants in densely packed Mumbai, to the bicycles that until recently filled the streets of Beijing, works by Hema Upadhyay and Ai Weiwei evoke the constant motion that characterizes emerging megacities.

Urban consumption is at the heart of Take off your shoes and wash your hands (2008) by Delhi’s Subodh Gupta: a wall of stainless-steel utensils found in urban Indian kitchens.

Choi Jeong Hwa finds beauty and grandeur in urban appetites, with an installation comprised of cheap plastic objects from markets and 99-cent stores, while Delhi’s Asim Waqif and South Korea’s artist collective flyingCity are inspired by the rapid building that surrounds them—from the ubiquitous bamboo scaffolding of construction projects, to the metal parts churned out by machinists in central Seoul trying to compete in a globalizing market.

Aaditi Joshi amasses plastic bags on which Mumbai retail relies, finding beauty in them despite the enviromental threat discarded bags pose, and Beijing’s Yin Xiuzhen alters rubble left behind by waves of demolition around her city. Using cast aside historic objects as new construction dominates their cities, Song Dong creates interactive architectural sculptures that recall how Beijing families once ingeniously extended their cramped living spaces into rooftop pigeon coops, while Shanghai-based Hu Xiangcheng’s constructions find life in windows and doors salvaged from dismantled Ming- and Qing-era houses. Seoul’s Han Seok Hyun creates an undulating landscape of green products in Super-Natural (2011)—using bottles of rice wine and packages of dishwashing detergent—to ask how his city’s growing environmental consciousness can be reconciled with its ever advancing urban development.”