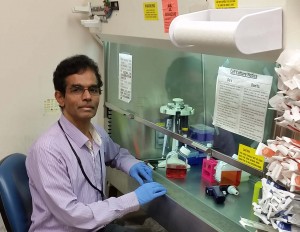 New York– Targeting an enzyme present in testes cells which give rise to sperm, researchers, including an Indian-origin reproductive biologist, have discovered a novel way to develop non-hormonal birth control drug for men that will be free of side effects.

The team found a way to produce the key enzyme in sufficient quantities which can lead to future drugs that stop the sperm from swimming to the egg.

“We are on the path toward the male contraceptive drug and this is a noteworthy benchmark along that path,” said Jagathpala Shetty, research scientist and co-study author at Virginia University’s school of medicine.

By targeting this enzyme, its function gets inhibited. It, thus, decreases the sperm motility — the sperm’s ability to swim — so that fertilisation cannot occur.

“Isolation of an active, full-length form of this enzyme allows us to test drugs that bind to the entire surface of the enzyme so that we can identify inhibitors that may exert a selective action on sperm,” Herr noted.

The team first identified a kinase enzyme that was unique just to the testes but, more importantly, was unique to the very last step of sperm production.

These dual biological features improve the likelihood that targeting the enzyme will have effects nowhere else in the body.

“Only perfectly healthy men can take the new contraceptive or male ‘pill’. Because of this fact, the drug should be very precise in its mechanism of action, without any off-target side effects on molecules with similar properties located in other organs,” the authors stated.

“The new findings will allow us to have a greater opportunity at identifying the right drug candidates and help guide the program to a drug candidate that binds optimally to the sperm form of this enzyme,” Herr added.