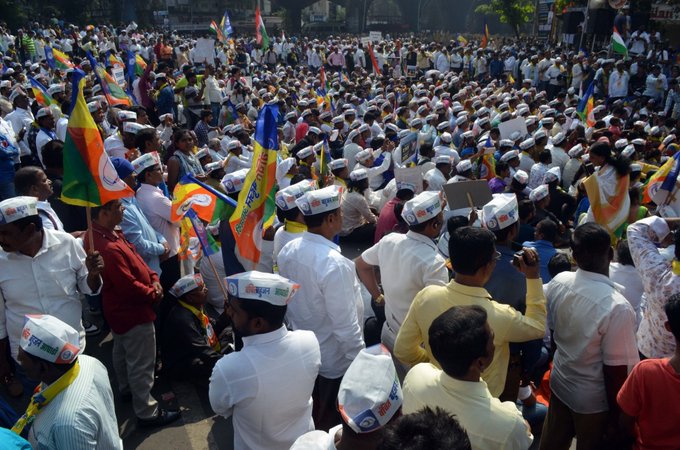 Another big procession was taken out in support of the CAA/NRC by some right-wing groups including the Bharatiya Janata Party, near August Kranti Maidan.

The anti-CAA protesters gathered at the Azad Maidan in south Mumbai and raised slogans against the BJP-led NDA government at the Centre.

They carried the tricolour, pictures of Mahatma Gandhi, B.R. Ambedkar and banners decrying the Modi government over the CAA/NRC laws.

“This is like a totalitarian government which bulldozed anything, believes it can do anything. It is the government’s responsibility to uphold, and not subvert the Constitution,” said Rajesh Shah, an activist protesting at the spot.

Others termed the BJP government as a “faceless regime”, and the laws were targeted “against not just the Muslim community but were detrimental to the whole country.”

The Joint Action Committee (JAC) for Social Justice, a body of activists, students and social groups, had organised the anti-CAA protest.

Originally it had planned a rally from Byculla to Azad Maidan, but they were denied police permission.

Fahad leads the student group ‘Mumbai Against CAA’, which mobilised many thousands for the August Kranti Maidan protest last week.

Students from four groups at IIT-B (Ambedkar Periyar Phule Study Circle, North-East Collective, Ambedkar Students’ Collective and Charchavedi) and others have joined under a collective called ‘IIT-B for Justice’, which is a part of the JAC.

Later, Leader of Opposition Devendra Fadnavis addressed the gathering at August Kranti Maidan, where he criticised the ruling Maha Vikas Aghadi government for refusing permission to the supporters of CAA/NRC to hold their protest rally.

He said those who indulged in violence and arson were allowed but those supporting the CAA were declined permission and added that nobody could stop them from endorsing the CAA. (IANS)