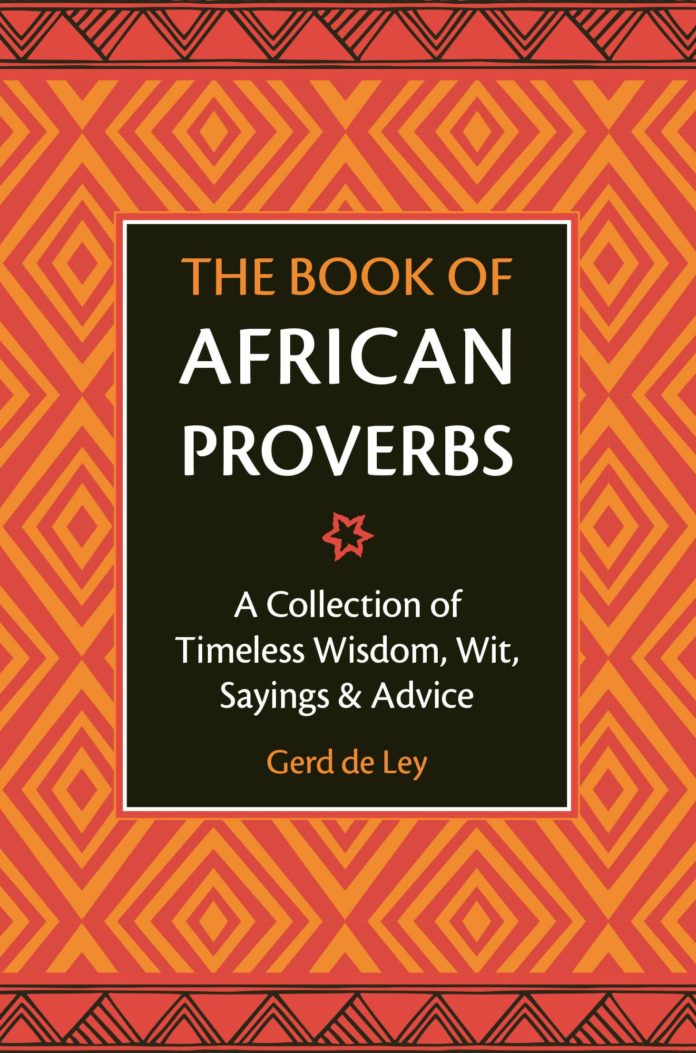 BOSTON—When it comes to ancient wisdom, we often turn to Greek mythology, Hindu scriptures, Chinese and Buddhist philosophy and many other traditional Asian, European and American cultures and writings. We often quote writers and sayings from these continents.

We almost always miss timeless sayings from Africa. Thus, when I was approached by a publisher to review “The Book of African Proverbs: A Collection of Timeless Wisdom, Wit, Sayings and Advice”, I was thrilled.

The Book of African Proverbs is compiled by Gerd de Ley, Gerd de Ley, a former English teacher who has been a professional writer and actor since 1975. From an early age, Mr. Ley has been an avid collector of quotations and proverbs from all over the world. The book is published (1919) by Hatherleigh Press.

The Book of African Proverbs contains over 1,200 of the best, most profound and illuminating proverbs from Africa, its nations and its people. It highlights the wisdom, humor, and character of people from all over Africa.

“The many nations of Africa differ greatly from one another, and their respective proverbs help to point out these unique differences,” Mr. Ley says in his introduction. “Proverbs on slavery reflect a historical time of anguish. Furthermore, proverbs about crocodiles, snakes, elephants, and other animals tell a great deal about human nature on a more universal level.”

Here are some samples from various sections of the book:

“After every affliction there is enjoyment.”

“In crooked wood one recognizes the artist.”

“One blow will not knock down the strong man.”

“Chance comes to those who know what they want.”

“One who bathes willingly with cold water does not feel the cold.”

“Don’t look where you fell, but where you slipped.”

“In the West they have watches, but we have the time.”

“A coward sweats in water.”

A Tradition of Storytelling

“One must talk a little, and listen a lot.”

“Silence is the best answer to stupid.”

“One falsehood spoils a thousand truths.”

“The heart of a fool is in his mouth and the mouth of the wise is in his heart.”

“A wise man never knows all, only fools know everything.”

“Words are like spears: Once they leave your lips they can never come back.”

“Death is like a dress that, at some point or another, everyone has to wear.”

“To take revenge is often to sacrifice oneself.”

“He who conceals his disease cannot expect to be cured.”

“When there are no old men, the town is ruined.”

“It is sad when the elephant dies, but whole town can feed on it.”

“An agreement is a kind of debt.”

“Better a mistake at the beginning than at the end.”

“One who runs alone cannot be overturn by another.”

“He who complains much does little.”

“He who boasts much can do little.”

“When deeds speak, words are nothing.”

“Haste does not result in prosperity.”

“To try and fail is not laziness.”

“A baby cannot be heard crying in his mother’s womb.”

“A child is like an axe; even if it hurts you, you still carry it on your shoulder.”

“A white cloth and a stain never agree.”

“A cunning man like the company of a fool.”

“Better an enemy of the wise than a friend of the fool.”

“A women’s beauty is not hidden in her face.”

“Hold on to a true friend with both hands.”

“Scandal is like an egg; when it is hatched it has wings.”

“Among walnuts only the empty one speaks.”

“The fruit must have a stem before it grows.”

“Only the man who is not hungry says the coconut has a hard shell.”

“The kitchen is older than the mosque.”

“Rain does not fall on one roof alone.”

“Roots do not know what a leaf has in mind.”

“No matter how long the winner, spring is sure to follow.”

“Better to be watched by a wild animal than a nosey man.”

“The ants said: Together we will be able to transport an elephant.”

“A chattering bird builds no nest.”

“A little bird starts with one straw.”

“The bird flies high, but always returns to earth.”

“A butterfly that flies among the thorns will tear its wings.”

“The cobra knows its length.”

“A donkey always says thank you with a kick.”

“An elephant’s tusks are never too heavy for it.”

“Even an ant can hurt an elephant.”

“The witness of a rat is another rat.”

“Although the snake does not fly it has caught the bird whose home is in the sky.”

“Because we focused on the snake, we missed the scorpion.”

“When spiders unite, they can tie down a lion.”

“The skin of the leopard is beautiful, but no his heart.”

“Patience is a bird that hatches great eggs.”

Words to the Wise

“A warning to the wise is a blessing, to the fool an insult.”

“The one who damages the character of another damages his own.”

“Anger without power is ready to blow.”

“An axe is sharp on soft wood.”

“A beautiful thing is never perfect.”

“he who paddles two canoes sinks.”

“Because he has so many trades, he is unemployed.”

“Ugliness with a good character is better than beauty.”

“The fool is thirsty in the midst of water.”

“When a fool is cursed, he thinks he is being praised.”

“Blessed are those who can please themselves.”