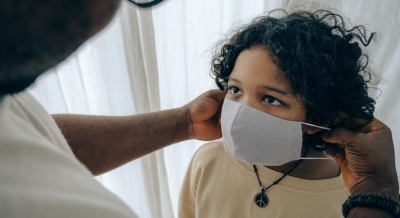 Sydney– More than the impact of being infected with Covid-19, children are facing many indirect effects of the pandemic in terms of health and wellbeing.

In a research review from the Murdoch Children’s Research Institute, paediatrician Prof Sharon Goldfeld said children are facing a “generation-defining disruption” with public health restrictions and interventions, the Guardian reported.

These include online learning, social distancing, increased screen time, reduced access to healthcare, less community sport and less outside play all having repercussions.

“The public health measures have resulted in positive benefits for some, while others have been adversely and inequitably impacted,” Goldfeld was quoted as saying.

“Children and adolescents experiencing adversity before the pandemic have been disproportionately affected, potentially leading to a widening of disparities in child health, wellbeing, and developmental outcomes,” he added.

The review, published in the Medical Journal of Australia (MJA), includes findings from a Royal Children’s hospital poll that found one-third (36 per cent) of Australian parents felt that the pandemic had negatively affected the mental health of their child, and that 31 per cent of parents had delayed or avoided medical care for a sick or injured child due to concerns about catching the virus.

A separate study found some children and adolescents infected with the virus experienced stigma and mental health distress such as difficulty sleeping, having nightmares and withdrawing from friends, the report said.

A survey of 5,000 teachers cited in the review found only 35 per cent of them reported their students were learning effectively during lockdowns.

Goldfeld said some families also lacked the resources and time needed to support their children during remote education.

Further, Goldfeld said even areas such as child nutrition and child safety had been impacted due to reduced family income and job losses during lockdowns, and parental mental health issues and stresses.

“Job loss and reduced income is a known risk factor for harsh parenting and maltreatment,” she said.

A study released by the UN cultural agency UNESCO, last year, revealeda-that more than 100 milliona-children than expected, are falling behind the minimum proficiency level in reading, due to Covid-related school closures.