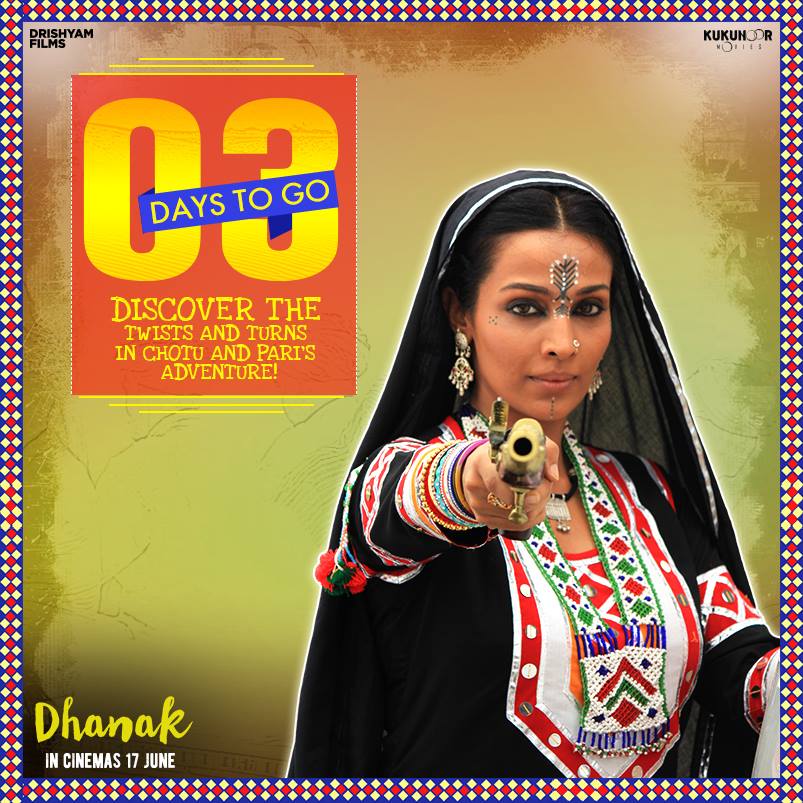 With all attention on the hyper-controversial drugged drama this week, this silent killer of a gem sneaks up on us, with the minimum of fanfare and maximum impact.

“Dhanak” is a very rare product of a breed of cinema where simplicity and intelligence come together in an unlikely marriage of excellence. The main characters are a little blind boy who is a brat and a whiner and a major drama king, and his elder sister, wiser beyond her years endlessly exasperated by her kid-brother’s antics but committed to being his support and anchor as they set off to meet, hold your breath, Shah Rukh Khan who is committed to restoring his eyesight.

The journey is interspersed with an array of interesting encounters with characters who appear so much part of the landscape you wonder if Kukunoor decided to include them in his young travellers’ journey just because they (the incidental characters) were around.

Do the siblings, on a cross-country trek through rural Rajasthan, meet Mr Khan? Let’s just say “Dhanak” is a far better and more worthy tribute to the stardom and aura of Shah Rukh Khan than the recent “Fan” which messed it up by getting the superstar-fan relationship wrong in the second-half.

“Dhanak” doesn’t strike one false note. The two young protagonists played by Krish Chabria and Hetal Gada are such natural-born actors you wonder where Kukunoor found them. The two children bring unconditional joy to the script. And they speak a language that is real, vital and believable. The conversations between the 8-going-on-9 year-old Chotu and his 11-year-old sister ring so true, it’s like watching them without the camera.

As the two children set off on a cross-country journey to meet the superstar, Kukunoor’s elegant simple and lucid screenplay weaves into the plot the kind of close encounters of the thundering kind that exposes the two kids into an incredibly expansive world of kindness and generosity.

Kukunoor shoots Rajasthan’s desertscape with a reined-in luminosity, neither over-punctuating the topography for emotional impact nor underplaying it for the sake of counter-touristic brevity. Not since the cinema of J.P. Dutta has Rajasthan been shot with such skilful serenity. Chirantan Das is a poet masquerading as a cinematographer.

The film’s other commendable component is the eventful music score by Tapas Relia. The songs and music urge little sightless Chotu’s adventures into areas of sunshine even when the clouds loom large.

Barring one near-catastrophic encounter with kidnappers, Chotu and his protective sister never come face-to-face with peril. I wouldn’t say that’s a blind spot in the narrative. Good knows in a world that addresses itself to a drugged-out diabolism we need all the sunshine and positivity we can get. Without overdoing it, “Dhanak” offers ample doses of both.

No, you really can’t pluck holes in Nagesh Kukunoor’s enchanting excursion into the heart of innocence and salvation. This is a heartwarming ode to the dying spirit of the human and selfless compassion. Moving, funny and memorable, the two child actors are miraculous.