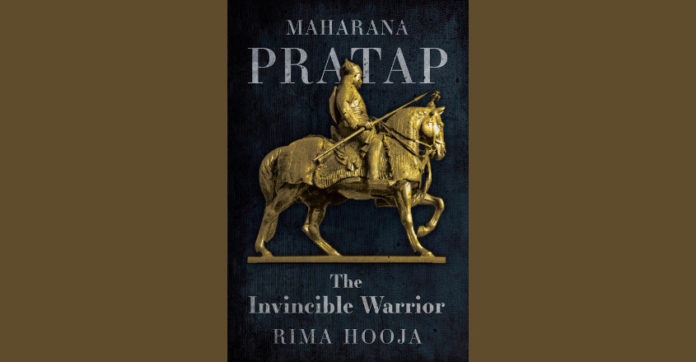 Who really won the battle of Haldighati? Did Maharana Pratap’s army and his Bhil tribals outnumber Akbar’s Imperial army? Did the Rajput king flee from the battlefield on his loyal steed Chetak or was it a strategic getaway? All of this, and more, is captured in this recent offering.

To those familiar with the heroic lore of the Mewar warrior, historian Rima Hooja’s book helps put into context his achievement as the man who valiantly withstood the might of the Mughal empire at its peak, despite being in banishment for large periods of his reign. And to those unfamiliar with his exploits, it helps visualise the life and times of the warrior and the battles and valour which earned him his place in history.

In many ways, Maharana Pratap of Mewar and Chhatrapati Shivaji of the Maratha region were warrior brothers, bound together with the blood history.

While Shivaji won over the services of his mavlas — bandied together from disparate castes and religions — Pratap who preceded him in time, was sheltered by Bhil tribals who he eventually recruited in his fight against the Mughals, along with Afghan warriors.

“Maharana Pratap – The Invincible Warrior” gives us an insight into his line of ancestry and his ascent as the Rana of Mewar, amid a period of uncertainty and strife in the Rajput kingdom.

While the book’s draw is the detailed depiction of the epic battle of Haldighati. The valley named after its turmeric colours terrain, in a way was a cleavage between the two chauvinistic egos of Emperor Jaluddin Muhammad Akbar, whose elaborate campaigns as well as all-powerful reign brooked no stopping and Maharana Pratap, the pride of Rajput sunkings, who would never bend to the imperial will of the Mughal ruler, keen on further expanding his footprint south of Delhi.

Hooja evaluates the strength of both Pratap’s army and Akbar’s force, quoting multiple historical references of the period and after it, which often contradict one another leaving the reader to weigh the options presented.

Hooja however lays to rest one persistent doubt, that the Maharana’s Mewar army was outnumbered by Akbar’s forces when they clashed at the battle of Haldighati, which took place in June 1576.

The book also narrates details about how the battle, one of the most popularly known conflicts, was not all about swagger and bravado, with both sides also resorting to trickery to boost the morale of their soldiers in a battle, where fortunes swing one way and then the other.

“In the heat of battle, when the Mewar forces seemed to be gaining the upper hand, the Mughal commander Mahtar Khan spread the rumour that Emperor Akbar himself was approaching, leading a large contingent of the imperial army. Akbar was not present at any stage of the battle of Haldighati, but at that moment the ploy worked and boosted the morale of the Mughal forces who, instilled with fresh courage, rallied anew.

The Maharana’s flight from battle against his wish, to “live to fight another day” as well as the account of his steed Chetak also finds reference in Hooja’s book, which formally establishes several aspects of the warrior’s life, already a part of North Indian legends.(IANS)