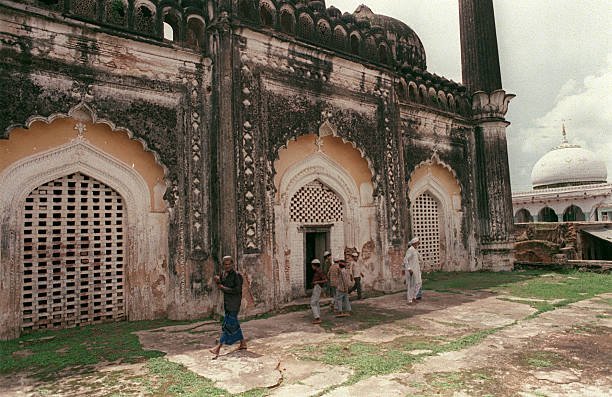 New Delhi– In a historic judgement in the hugely-sensitive Ayodhya land dispute case, the Supreme Court on Saturday directed the Centre to form a trust within three months to build a Ram temple at the disputed site.

The Sunni Waqf Board, which was a party to the seven-decade-old title suit, should be given an alternate five-acre land within three months at some other place in Ayodhya for the construction of a mosque, the five-member SC bench headed by Chief Justice Ranjan Gogoi said in a unanimous 1045-page judgement.

“On the balance of probabilities, there is clear evidence to indicate that the worship by the Hindus in the outer courtyard continued unimpeded in spite of the setting up of a grill-brick wall in 1857. Their possession of the outer courtyard stands established together with the incidents attaching to their control over it,” the verdict said.

The top court, while observing that it was tasked with “an adjudicatory task of unique dimension”, said, “The Central Government shall, within a period of three months from the date of this judgment, formulate a scheme which shall envisage the setting up of a trust with a Board of Trustees or any other appropriate body.”

It added, “The scheme to be framed by the Central Government shall make necessary provisions with regard to the functioning of the trust or body, including on matters relating to the management of the trust, the powers of the trustees, including the construction of a temple and all necessary, incidental and supplemental matters; Possession of the inner and outer courtyards shall be handed over to the Board of Trustees of the Trust or to the body so constituted.”

The bench, which also comprised Chief Justice-designate Justice Sharad Arvind Bobde, Justice Ashok Bhushan, Justice S. Abdul Nazeer and Justice D.Y. Chandrachud, said the Central government will be at liberty to make suitable provisions with respect to the rest of the acquired land by handing it over to the trust or body for management and development in terms of the scheme framed in accordance with the above directions.

“Possession of the disputed property shall continue to vest in the statutory receiver under the Central Government, until in exercise of its jurisdiction under Section 6 of the Ayodhya Act of 1993, a notification is issued vesting the property in the trust or other body,” the judgement said.

“Simultaneously, with the handing over of the disputed property to the Trust or body, a suitable plot of land admeasuring 5 acres shall be handed over to the Sunni Central Waqf Board,” the judgment said, adding: “The land shall be allotted either by the Central Government out of the land acquired under the Ayodhya Act 1993 or the State Government (UP) at a suitable prominent place in Ayodhya.”

The Central government and the state government “shall act in consultation with each other to effectuate the above allotment in the period stipulated,” the verdict said.

“The Sunni Central Waqf Board would be at liberty on the allotment of the land to take all necessary steps for the construction of a mosque on the land so allotted together with other associated facilities,” it said.

The bench, while delivering the landmark judgement, noted that the dispute was over immovable property and “the court does not decide title on the basis of faith or belief but on the basis of evidence.”

It emphasised that “every judge of this court is not merely tasked with but sworn to uphold the Constitution and its values. The Constitution does not make a distinction between the faith and belief of one religion and another. All forms of belief, worship and prayer are equal.”

The apex court also said that the three-way bifurcation of the land ordered by the Allahabad High Court in 2010 was “legally unsustainable”.

“Even as a matter of maintaining public peace and tranquillity, the solution which commended itself to the High Court is not feasible. The disputed site admeasures all of 1,500 square yards. Dividing the land will not subserve the interest of either of the parties or secure a lasting sense of peace and tranquility,” it observed.

In its judgement, which took cognizance of historical records and reports of the Archaeological Survey of India (ASI) and various other materials, the court said, “The evidence indicates that despite the existence of a mosque at the site, Hindu worship at the place believed to be the birth-place of Lord Ram was not restricted.

“On the other hand, the learned counsel fairly stated that the evidence relied on by the Sunni Central Waqf Board to establish the offering of namaz by the Muslim residents commences from around 1856-57.”

The judgement also referred to the setting up of a railing in 1857 by the British around the disputed structure of the mosque in the backdrop of a contestation and disputes over the claim of the Hindus to worship inside the precincts of the mosque.

“This furnished the context for the riots which took place between Hindus and Muslims in 1856-57. The construction of a grick-brick wall by the colonial administration was intended to ensure peace between the two communities with respect to a contested place of worship.

“The grill-brick wall did not constitute either a subdivision of the disputed site which was one composite property, nor did it amount to a determination of title by the colonial administration,” the judgment said. (IANS)