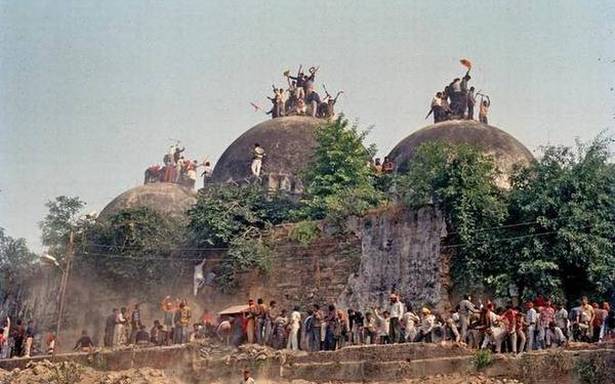 New Delhi– In the much-awaited verdict in the Ayodhya land dispute case, the Supreme Court on Saturday said that Hindu and Muslim faiths co-existed before the 1856-57 riots which broke out between the communities in the vicinity of the structure.

In what will go down in history as one of its most landmark verdicts, the Supreme Court on Saturday granted the ownership of the 2.77 acres of disputed land in Ayodhya to the Hindus, paving the way for the construction of a Ram Temple, and ruled that the Muslims will get 5 acres of land at an alternative site.

The apex court stated that it was tasked with the resolution of “a dispute whose origins are as old as the idea of India itself”.

“The events associated with the dispute have spanned the Mughal empire, colonial rule and the present constitutional regime,” the five-judge SC bench led by Chief Justice of India Ranjan Gogoi said.

The top court observed that within the premises of the same complex, there existed two religious faiths.

“Their coexistence was at times, especially before 1856, accepting and at others, antagonistic and a cause of bloodshed. Yet, the distinctive features of the site, embodying both Hindu and Islamic traditions, led to the creation of a space with an identity of its own,” the five-judge bench said.

It stated that the real significance attached to the composite structure is evidenced by the nature and the length of use by both of the parties.

“The disputed site has witnessed a medley of faiths and the co-existence of Hindu and Muslim practices, beliefs and customs,” the court said, explaining the religious and architectural tradition of the demolished mosque.

A blend of Hindu and Muslim elements emerges from the religious and architectural tradition associated with the erstwhile structure which embodied the features of both a temple and a mosque.

While the distinctive architectural elements overlapped, they were easily recognisable.

“They were symbols of a syncretic culture. Specific sculptured finds such as the black Kasauti stone pillars along with the presence of the figurines of Varah, Garud, Jai and Vijay suggest that they were primarily meant for decoration of a Hindu temple facade and served as deities to be worshipped,” the top court said.

At the same time, the distinctive appearance of a mosque emerged from the three domes, the Vazoo, the stone inscription with Allaha, the mimbar and the mehrab. These features indicate that the disputed premise was constructed as a mosque, the court observed. (IANS)