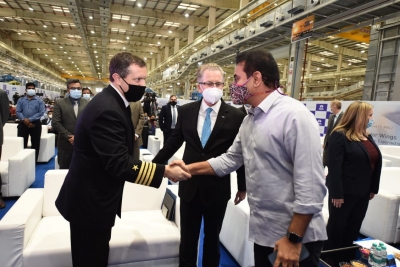 An event marking the first fighter wing prototype built at the TLMAL facility in Hyderabad was attended by Telangana’s Industry Minister K. T. Rama Rao along with the global business development executives of Lockheed Martin Aeronautics and leadership team of Tata Advance Systems Ltd and TLMAL.

Rama Rao noted that Lockheed Martin and TLMAL signed an agreement in 2018 and today the first made in Hyderabad, made in India F16 wing is certified and delivered to Lockheed Martin

He noted that this partnership is growing stronger spanning multiple manufacturing programmes.

“This effort represents Lockheed Martin demonstrating to India, and to the world, the degree of confidence that exists in our relationships with our partners in India. Lockheed Martin is one of the only aerospace and defence companies with a complex aerostructure capability for advanced fighters in India.”

Rama Rao said he was happy to know that over 70 per cent of the detailed parts of F16 wing built here were sourced from Indian industry partners. He said F16 wing manufacturing in India echoes Lockheed Martin’s confidence in Indian manufacturing capability and its commitment to support India’s defence manufacturing goals.

KTR, as the minister is popularly known, said successful certification and delivery of F16 wing is also a great testimony of the advanced skill base and capabilities of Hyderabad’s aerospace and defence ecosystem.

“Telangana today has the most active and well supported aerospace and defence ecosystem in India. This sector has witnessed unprecedented growth during the past five years. Anchored on the progressive policies of the government of Telangana and world-class infrastructure support and unmatched ease of doing business experience provided by the state government, more and more OEMs from the US, UK, France, Israel and other nations are choosing Hyderabad to establish their state-of-the-art manufacturing, engineering, training and innovation centres in India,” he said.

He claimed that the repeat investments announced by the leading OEMs including Lockheed Martin is a great indicator for the “reliability of our ecosystem”.

He pointed out that Hyderabad also has a large cluster of local MSMEs, numbering more than 1,000 engaged in precision engineering, catering to aerospace and defence sector. Many are integrated into global supply chains, he added.

The TLMAL – a joint venture between Tata Advanced Systems Ltd and Lockheed Martin Aeronautics – was established in 2010. It serves as the single global source of C-130J empennage assemblies that are installed on all new Super Hercules aircraft. TLMAL recently reached the milestone of manufacturing and delivering the 150th C-130J empennage.

Lockheed Martin and the TLMAL signed an agreement to develop a fighter wing prototype in 2018. Through this prototype project, the TLMAL demonstrated the capability to perform detailed part manufacturing and delivery of a fully compliant representative fighter aircraft wing shipset. This achievement further strengthens Lockheed Martin’s partnership with India, and supports its F-21offering for procurement of 114 new fighter aircraft – exclusively for India and the Indian Air Force – by proving additional indigenous production capability.

“With this, the TLMAL creates a new benchmark in complex and end-to-end defence manufacturing in India that demands utmost precision and quality in all aspects of the process,” he added. (IANS)