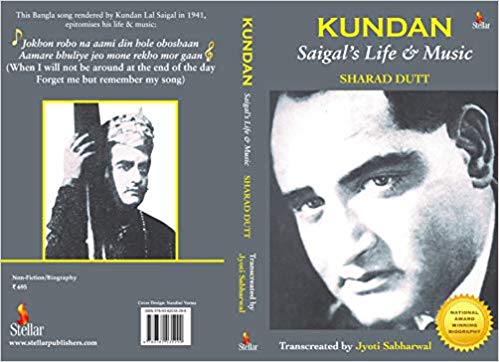 New Delhi– Kundan Lal Saigal once strode like a collosus over the Hindi and Bangla music worlds, jovial and good-humoured but never sharing his personal tribulations – here’s why; next, explore a new world where changes in technology make one wonder what the next generation will turn into; and finally, learn how gravitas not only inspires you but also inspires greatness in others.

The IANS Bookshelf has an eclectic and uplifting offering for you this weekend.

His unique voice and singing style, coupled with an acting prowess, has not possibly been emulated – and for good reason.

“The litmus test of any artistic endeavour lies in the fact that even with a classical base, it invades the realm of popularity and enchants the masses. That was the warp and weft of Saigal’s craft that immortalised his songs,” writes National Award-winning author Sharad Dutt, a former DDG of public broadcaster Doordarshn, who has been credited with bringing Indian literature and Indian litterateurs on the small screen and introducing the universe of books to common viewers.

In a film career that spanned 15 years – 1932-46 – Saigal performed in some 36 films in varied genres of songs, ghazals and bhajans each of which tug at the heart even when heard to this day.

“It is often stated that a musical rendition makes a mark when it emanates from a wounded heart…At what point Saigal was grievously hurt could not be established but the anguish in his voice remained unextricable, be it in his acting prowess or his skilled singing,” Dutt writes.

Will the perfect partner need to be charged before bed? Will we soon be taking happiness pills before breakfast? Will the screen that we peer into soon be within us? Has the first person who will live to be 150, been already born?

It’s a new world we are walking into and the man who began this journey is not the man who will end it. In this debut novel, Atul Jalan, a science storyteller and futurist, the founder-CEO of pioneering AI venture Manthan, explores how the technology man has built is transforming him and the institutions he has created.

“I like to call ours a Gutenburg moment. As Johannes Gutenburg looked at his first proofs, did he for a moment think that he was flagging off one of the golden ages of mankind?…We are witness to a similar moment in history when mankind takes another giant leap. One that will elevate man again – as a species infintely more sapient,” Jalan writes.

Authentic gravitas means you are respected and trusted, your words carry weight, your ideas are taken seriously and your contributions valued. This also requires you to bring out these qualities in others. Thus, you are not only inspiring but also inspire greatness in others.

“Throughout this book, you will meet some truly inspiring leaders and professionals who built true gravitas and you will learn how they did it. We’ll look at what gravitas is, what it isn’t, and debunk gravitas myths to discover the surprising truth about who stands out and why,” writes Newton, an Organisational Psychologist and Senior Visiting Fellow at the London School of Economics and Political Science in the Department of Management. (IANS)